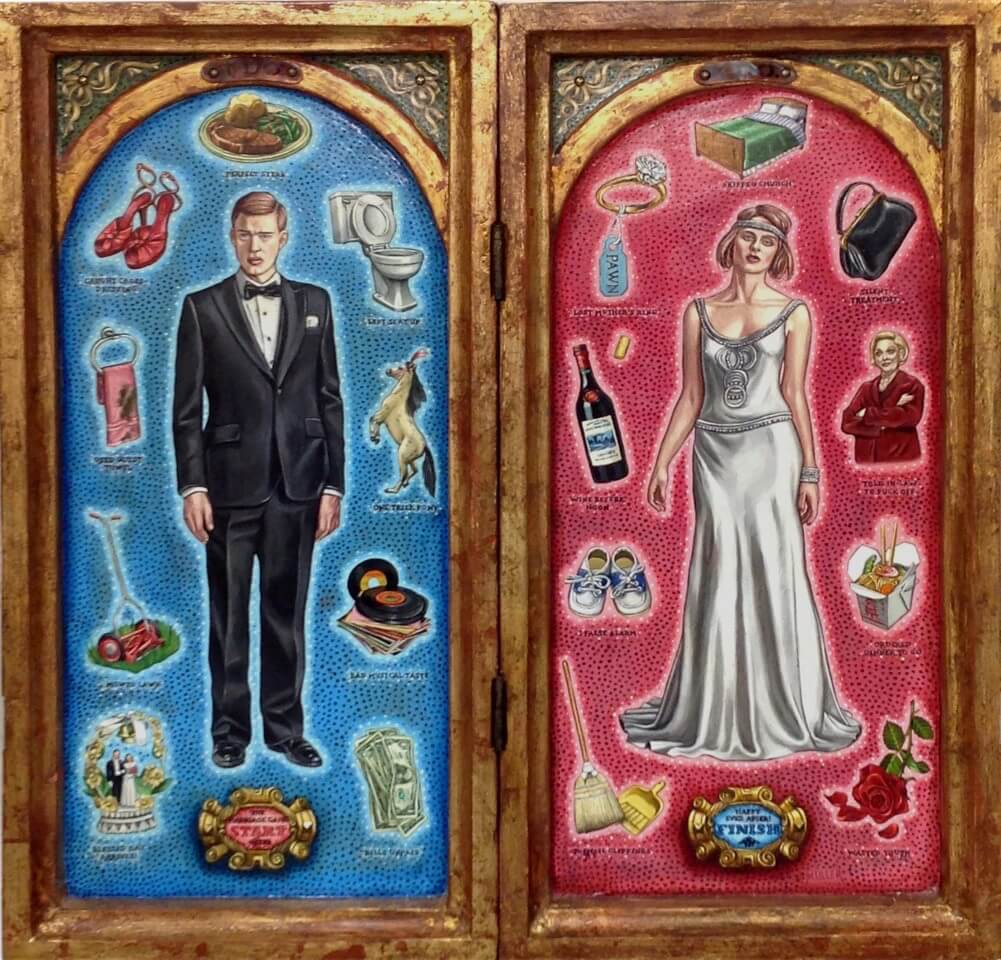 Multi-media artist Troy Muller creates objects that aspire to be something other than what they are — namely, works by an early-twenty-first-century American artist.

Each of the objects in Honey Mushroom Wonderfuls, the mysteriously named show of Muller’s work at Modern Arts Midtown, appears to be from another time, one in which it played a cultural role that we may or may not discern.

Most frequently, this role is something approaching the sacramental. Wall-mounted assemblages such as The Great Rift, Witness 1, Witness 2, and The Marriage Game could have been yanked from the walls of some strange church in which the sacred and the profane are hopelessly intermingled and objects of worship are juxtaposed with objects of disdain.

The Marriage Game, for instance, is a diptych portraying a glum-looking couple encircled by symbols of the material satisfaction that supposedly comes with wedded bliss. The effect is similar to medieval and Renaissance portraits that often surround individuals with manifestations of their wealth and station.

In Muller’s work, the two figures and their assorted toys (jewelry, a bottle of wine, a lawnmower, even a box of takeout Chinese food) are all bordered with what he calls an “aura.” They float in a space defined by a stippled background that Muller says he borrowed from Mexican folk art as a means of “hyper-objectifying” the various pictorial elements of each work.

These elements tend to have their origins in Post-World War II America, when achieving the American dream seemed possible as represented by the houses, cars, and appliances that everyone aspired to own.

The images have a comic book quality, but upon closer examination they shift into a darker register, not unlike a graphic novel, with allusions to violence, bankruptcy, addiction, and rampant consumerism.

Muller’s interest in this duality is stimulated in part by the work he does with veterans, many of whom have made huge sacrifices in defense of the American dream only to find that too often they have difficulty gaining access to it. He is the co-founder of an organization called the New Century Art Guild, which provides veterans with opportunities to explore art professionally, recreationally, and therapeutically.

In Witness 1, Muller tries to capture the reality of post-traumatic stress disorder by depicting a human head with several layers of skin and tissue pulled away in the manner of an illustration from a medical textbook.

The head appears to be leering out at us as we try to piece the meanings of the surrounding images (combat medals, a fetus, a briefcase stuffed with documents) together.

As if all of this were not a tall enough order for any artist, Muller has lately been trying to expand interpretive possibilities still further by creating works that have moving parts. Shifts among the different parts of a work interest him because, as he put it, “meanings change as relationships change.”

This is most apparent in Debt Cycle and Decisionmaker.  Both appear at first glance to be whimsical and colorful spinning wheels of the kind one finds at carnivals.  Again, however, this veneer of pollyannish simplicity gives way to social critique.  In Debt Cycle, for instance, being a “big shot” is just one spin of the wheel away from being a “deadbeat.”

All of this back and forth takes place within frames that Muller designs and builds himself, in part so he can, as he has put it, “get beyond the rectangle.”

The Great Rift, for instance, is a large eight-pointed star. It too is populated with the ephemera of middle-class existence (a toilet, a television, a typewriter, etc.), but this time with a kind of celestial map superimposed over the objects. The title refers to a particular area of dark space that cuts a mysterious gash in the otherwise-bright Milky Way.

Muller is adept at drawing upon the discourses of science, religion, history, and more to create a compelling, often humorous but also foreboding vision of the world.

This is apparent even in the name of this show. Honey Mushroom Wonderfuls are imaginary products that Muller dreamed up as part of a writing project (yes, he writes too). He even composed a long list of ingredients for the strange snack that includes “shredded paper (from a collapsed currency)” and “expired Oxycodone (stolen from Grandmother’s cabinet).”

It’s difficult to capture in a review the range of thoughts and emotions elicited by Muller’s work in this exhibition which includes a group of figurative sculpture that likewise comments on contemporary culture. This is in part by design. Muller says he aims to create works that require direct experience, rather than being accessible through the mediated realm of jpegs and computer screens.

As Muller put it in an artist’s statement from an earlier show, “I put myself in the point of view of a future archeologist, unearthing objet d’art treasures and revealing them to a curious public.”

Honey Mushroom Wonderfuls is on view until July 29 at Modern Arts Midtown, 3615 Dodge Street. For more details, go to modernartsmidtown.com.