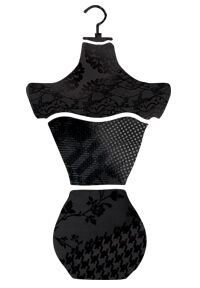 “Think of it as a warm-up to Sex and the City 2,” said the L.A.Times about Nora Ephron and Delia Ephron’s Love, Loss, and What I Wore,  a “kind of affirming chick outing.” This theatrical collection of monologues might be a different type of warm-up for a chilly winter evening at Omaha Community Playhouse. In a spin-off from a 1995 book of the same name by Ilene Beckerman, a collection of tales unfolds, often comic, but sometimes sentimental or sad glimpses of women’s lives.

A narrator sketches meaningful parts of past wardrobes which stir poignant memories. She weaves them into other tales by other people. According to a review in Variety, another character serves as a vixen, a third is a vulnerable gang member from Chicago, the next is a cancer patient, and the last is a mature woman dealing with vivid times gone by.

In 2009, after the off-Broadway debut, this show ran for more than two and a half years, setting a record. The production won the 2010 Drama Desk Award for Unique Theatrical Experience. There have been subsequent performances on six continents.

Nora Ephron was a journalist, essayist, playwright, screenwriter, novelist, producer, director, and blogger. She was well-known for romantic comedies and nominated three times for the Academy Award for Best Writing in Silkwood, When Harry Met Sally…, and Sleepless in Seattle. Her last film was Julie & Julia.

Her sister Delia’s screen credits include You’ve Got Mail, The Sisterhood of the Traveling Pants, Hanging Up and Michael. She’s created novels for adults as well as collections of humor and essays. She’s also a newspaper and magazine writer.

Among Ilene Beckerman’s other books are What We Do For Love, The Smartest Woman I Know, Makeovers at the Beauty Counter of Happiness and Amores, Desamores…& Trapos. http://ilenebeckerman.com/

Some of the language on stage is strong stuff. It should wear well, though.