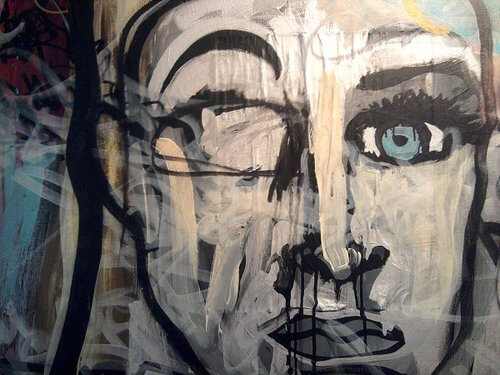 This show is unique as it features both individual and collaborative paintings from both King and Brown.  Their styles may be different, but the collaboration between them makes their partnership provocative.  Both artists are self-taught and bring their own inspiration to their work.

King’s works are a self-transformational.  His imagery, sophisticated and straightforward, neo-expressionistic and primitive, incorporate acrylic and spray paint intermingled with text to create interesting and thoughtful works.

“Words, like paintings, are not singular in their meanings” he said at the show’s opening. “Words or paints take on different meanings given the circumstance, be it place, time of day, the way the speaker pronounces the word, or the sound of the speaker’s voice…however, the way the voice is organized is still up to me.”

King displayed clever gifts for color, line, and composition.  There is a sense of urgency to his work charged with emotion.  His work is lively, thought provoking and seems to stimulate conversation.

“I wanted to really drive home the notion of decay with this show,” King said.  “Decline socially, mentally, physically, religiously, geographically.  Decline is all around us.”

One piece that does speak to that decay is “Dead Inverse/Doves” because it is a retrospect of his life.  At first, it seems like a dynamic explosion of color and text.  But there is a narrative of his life on that canvas.

“This piece is names of people I used to know.  They are people and friends of the past that were in my life that have now moved on.”

The least colorful piece seems to be one of his strongest.  The work entitled “Self Portrait” is an arresting and remarkable portrait of King.  His use of various shades of gray gives the viewer an interesting insight of his own work.  There is a brooding sense to his work and his pensive way of looking at society.

“The show is titled “XO”  which for me is about loving the gradually declining form of myself…even more of others, because within my life, there’s only now that we are given.”

“Mallory vs. Low Expectations” is another remarkable piece from King.  This is another personal piece by the artist because Mallory is a friend of his.  This piece forces the viewer to look, read, and listen to their inner voice of self doubt which plagues so many of us.

“In some way these paintings are an extension of the anxiety that occurs when painting them.  Anxiety to me is the fear of committing to an action.  I do not want viewers to think of how they or I would say what the painting means.  I would rather they try to identify its action.”  King said.

Anthony Brown’s paintings vary from King’s.  His focus is more on the human form and popular culture then on King’s urban influences.  The piece “Flight of the Rocketeer” is an interpretation of one of his favorite movies.

“Classic movies and cartoons have played a major role in triggering my imagination, along with mixing this with my own experiences and feelings,” Brown said.  “Each painting is carefully composed layer by layer on canvas.  Various mediums are utilized to create the final result.  Mixtures of techniques, along with my own twist, make each painting unique.”

“Reflections in a Golden Eye” is another piece influenced by his love of movies.  There is also a strong theme of women in his work.  In this piece Brown’s use of texture and metallic colors bring a strong vibrancy to his work.

“The choice to use mainly women to me wasn’t really a choice at all.  Women have always been point of interest in my life.  As an artist, I’m always looking for a subject that inspires the female universe.  This is a never ending source of inspiration for me.  Women fashion, to their roles in film or simply the female form triggers my artistic mind to communicate these images on canvas.”

This is Brown’s first show.  He resides in Fremont, NE and his first entry into art was doing wall murals for homes.  Most have been sports, animal and floral designs.

“Not having any training in painting techniques I began to learn various methods through trial and error, copying many of the styles that were demonstrated by the old masters.”

Brown’s style is a combination of classic artistic form mixed with a lowbrow sensibility.  He tends to blend both male and female forms with animal heads.  “Street Cheetah” is just such a piece.  It is a cheetah head affixed to a strong male figure covered in tattoos.

“In a way it’s a self portrait because it’s the way I wish I looked meaning if tattoos won’t so permanent I would tattoo my whole body,” he said. “I would love to wear gold chains all the time, but this I cannot afford and the cheetah face is just a mask that I had from a party.  The whole idea is to keep the mask on the whole time and have a conversation with people you don’t know.”

Looking at these artists we see a mental remaking of their experience that is clearly visible.  There is a balance that each artist brings that is tempered with an intense, individual style. Together they make a dynamic statement on both society and culture.