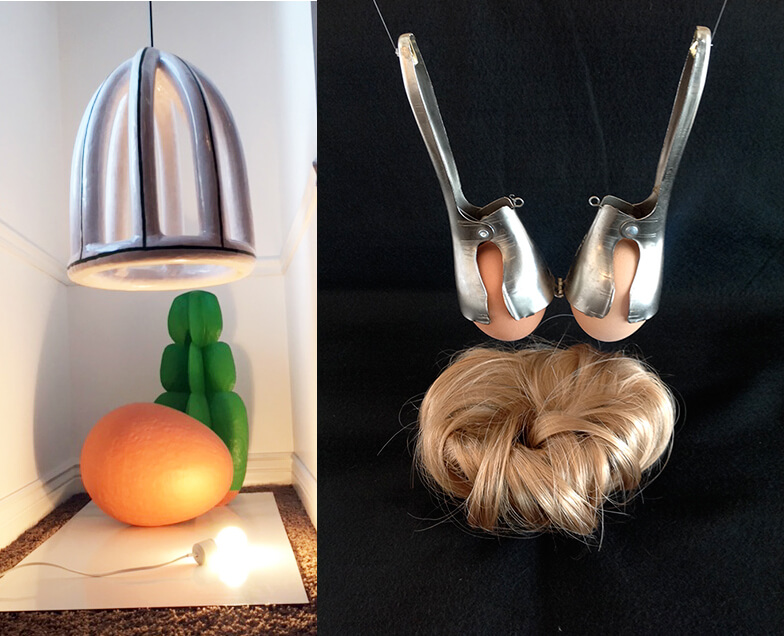 Over time, each new wave of artists has searched for novel venues to pitch their innovative visions to the public. In mid-19th century France, the Acadamie des Beaux Arts held reign over art’s definition.

When Monet, Cezanne, Renoir, Degas and others joined forces to share their “en plein air” paintings, they were rejected by the state-sanctioned Acadamie, so a French photographer, known as Nadar, offered his studio to display 30 of the Impressionists’ work. Guess everyone knows how that turned out.

In Omaha, newcomer Darger HQ offers a similar venue for alternative artists.  UNL grad student, Qwist Joseph and Serbian artist, Maja Radanovic, seized the opportunity to display their own work as well as collaborate on an installation for Darger HQ’s unique space. On display through April 17, their exhibition, The Space of Thoughts II, is an homage to Im Spazio, an exhibit that in 1967 initiated the Arte Provera movement in Italy.

In selecting both artists, Launa Bacon, curator and director of Darger HQ, followed Darger’s mission to connect “Nebraska contemporary artists to the world by creating collaborative working opportunities between local artists and national or international artists with related practices.”

The idea is to help “develop partnerships that benefit artists by providing new means of support through both private and non-profit sources.” One could tell from the artists’ talk in February that the mission of partnership had been accomplished as both had developed a mutual respect and friendship and were all smiles over the results of their collaboration.

Qwist and Radanovic were tasked with creating an installation in tune with Darger’s space. Formerly Marino’s grocery, this recently renovated, full-window store-front is now a white-box residential space with copious ambient light, contemporary fixtures and classic moldings.  The artists had only three and a half days to make it all happen!

The two set to work to reflect the values of the Arte Provera movement of the 1960’s by incorporating everyday items into their creations. They also worked to integrate their own philosophies:  Radanovic’s responses to global issues, and Joseph’s efforts to break the monotony of American culture’s “immediacy and knowability.” More than anything they let their senses of humor go to work!

Clay artist Joseph,  given the renovated kitchen space and the building’s Italian grocery heritage, created two-feet long terra cotta sausages that hang from the rafters behind the kitchen island as if on display for contemporary shoppers. The series, fun and appetizing, is aptly named Ommagio A. Marino.

A broken pendant light fixture hanging above the kitchen island spurred Joseph to create a sculpture “Drip,” 30 pounds of unfired clay that flowed amorphously from the pendant to the counter, ultimately, to hang over the island edge.  A cluster of brown eggs added a warm, domestic touch to the sculpture.

The fireplace setting gave the pair a chance to comment on Nebraska.  Above the fireplace, a TV screen of popcorn suggested the rural aspect of the state as well as its football mania.  Added head phones with sound tracks of gunshots offered another characterization.  In the same area the two created a long-roped circular swag reminiscent of a hanging light fixture, but meant to suggest a nest . . . of spaghetti.

Radanovic’s works incorporated a number of pieces with hair as a focal point.  Oddly, the artists found common ground on issues of hair.  Both have experienced hair loss and now feel greater significance in the way cultures interpret hair.

One of Radanovic’s hair series, “The Other Woman,” features an ascot of lush long hair emerging from a man’s white shirt collar, all condensed in an ornate white frame.

Another, “Step On,” is a provocative arrangement of a length of women’s brown tresses hanging from a metal shoe stretcher that falls between a pair of men’s dress shoes.  Such timeless, feminist issues are captured by Radanovic with materials and titles that easily translate.

A viewer might agree with the artists’ own assessment of the exhibition–that their personal work might feel “plopped in” to the collaborative exhibit. Radanovic’s three self- portrait paintings, while giving a feel of her new life after Serbia, felt like a media mismatch in the midst of a sculptural show.

Luckily for Omaha, Darger HQ, as a non-profit gallery, supports exhibits of the “most innovative contemporary art,” providing artists a stipend for their expenses and allowing them to collect the full proceeds from any art sales.

As Nadar offered the Impressionists a welcome mat for their unique artisitic visions, likewise, Darger HQ, its donors, and its director, Launa Bacon, give space to the next wave of  contemporary artists.