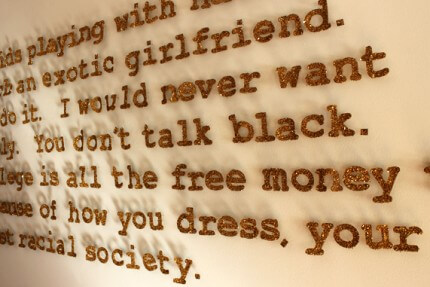 The 1960s art world found ‘ideas expressed by words’ taking on as much significance as ‘images painted on canvas’. Metro area artist Angela Drakeford continues this tradition in the exhibition I Can Grow Tall, presently on view at the Bemis Center’s Carver Bank location in North Omaha. A UNO graduate, Drakeford’s interest in text-based work has been the focus of her studio practice for the past several years.

“I am fascinated with language,” Drakeford said in an artist talk given at the exhibition’s opening, “especially language intended to marginalize people.”  Language, which can marginalize people, is the theme of “Unsolicited”, the exhibition’s large wall installation. The letters of the text are attached to the wall with straight pins. The words protrude creating subtle shadows behind them. Made from tarpaper, glue, and glass glitter they appear to float in front of the wall, not unlike the way a thought can linger in the mind.

“There is a fetish in America with bi-racial people,” she said concerning this piece. “It makes me mad people treat people this way. Stop and think about what you say about another person, how that makes them feel.”

Each sentence has a nuance all its own, floating in its potential power to render judgment. In reading the cadence and structure of each sentence, it becomes clear they were spoken by different people. If each sentence had been arranged individually, using the entire wall, the blunt force of each speaker might communicate more directly. The contrasting quality of tarpaper and glitter provides material presence for the glorification of ignorance uttered. It’s an effective device, allowing the viewer to participate in Drakeford’s outrage.

The history of 2oth Century Art contains many examples of words presented as art being used to subvert language’s power. Belgian artist Rene Magritte, in his 1926 painting of a pipe, painted below the pipe “Ceci n’est pas une pipe” (“This is not a pipe”). Appearing as a contradiction, it is the truth. It isn’t a pipe. It’s a picture of a pipe.

Jasper Johns stenciled words to disrupt the perception of the word as an image, and transform it into an object. In “False Start” 1959, the word RED is painted with the color orange, ORANGE is painted in white, WHITE in red, BLUE in yellow, and YELLOW in blue. In 1971 California based artist John Baldessari, instructed gallery assistants at the Nova Scotia College of Art and Design, to write on the gallery wall “I will not make any more boring art.”

Like a schoolroom punishment written repeatedly on a sheet of paper, Baldessari used the context of the gallery space to punish himself for making boring art in the past and declaring he wouldn’t do it again. True to his word, he hasn’t. Drakeford uses the gallery wall with the intention of punishing an abuser and revealing oppressive language for what it can be.

On the wall opposite “Unsolicited” is “Self-Portrait” (2013), a densely filled rectangular wall piece. Containing what looks like over 100 paper flowers made from tarpaper, “Self-Portrait” poignantly illuminates beauty obscured. The direct simplicity of its presentation allows for the palpable nuances of what it feels to be fully human and vulnerably present.

“It’s about my past, present, and future,” Drakeford said. “Tar paper is a disgusting material to be making something beautiful with.” Something beautiful has been made with it, in what appears as labor intensive a process as displayed in “Unsolicited.”

“I took your advice. I wish you were still here to see how well it worked out. (2013)” is a piece of thin black gauze hung from the top of the wall to the bottom of the floor. Embroidered a little below midway is the phrase “Don’t Sink.”. The nature of the embroidered words and quality of the material gives the piece a very personal feeling. During her talk Drakeford referred to the piece as being about racial ambiguity and containing a statement her late father told her. The contrast of personal emotional content presented in a non-personal public gallery amplifies a specific poignancy in the piece.

Drakeford’s theme of bi-racial identity is addressed with text in this Bemis Center’s Carver Bank installation. Two years ago, in September of 2011, New BLK Directors Shane and Shawn Bainbridge along with artist Tim Guthrie put together a one-evening city-wide group video show, Picture Picture: Nebraska Video Art Now: 1 Night and Done. This reviewer’s recollection of Drakeford’s videos in that venue recalls a sense of disjointedness effectively communicated through the medium, an attempt to embody the reconciliation of opposites. In her act of reconciliation through text, passionately displayed, Drakeford  continues to demonstrate that she can indeed grow tall.