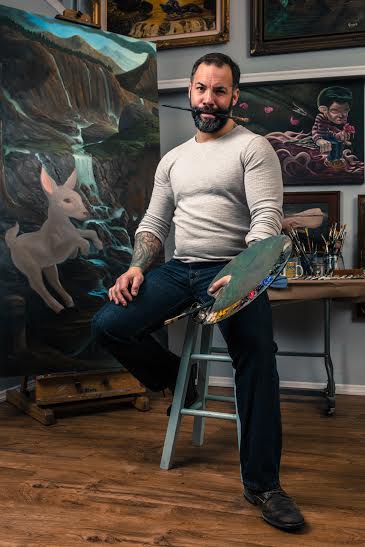 Known for his “cute and creepy” artistry, Gunnar Gaylord has really created and developed his own unique style.

While the self-taught artist said he sometimes regrets not having a formal art education, he’s not sure he would have developed in the same way if he had artistic academic knowledge.

“Passion can trump talent and education and I have often been very passionate about art,” he said in an email interview.

Of course, when it comes to tattooing, it takes more than passion. While he may not have the technical education, one look at some of Gaylord’s work will show that he does have the talent.

A lot of his creepy-cute tattoos feature a cartoon-like animation, often depicting people and creatures with exaggerated heads and characteristics, but with smaller bodies. There often seems to be a sense of melancholy to these sweet images, which has become a major underlying element of his work.

“Some are based on my life at the time they were created,” he said. “Others are just products of thoughts on life.”

More recently, Gaylord has been focusing his time and energy on branching out. He has opened his own gallery, AOG (Art Of Gunnar) Gallery in his current city of residence, Lancaster, Ohio. He said his favorite thing about owning his own gallery is that it’s given him a chance to become more involved within his community.

“I live in a wonderful little town filled with some amazing people,” he said.

Though it may be a small, conservative town, Gaylord said the people have been wonderful and accepting of his work, despite the fact that it may seem “a little out of the norm” for them. He said that while they may have viewed tattoo art as something a little “seedier,” before, he has enjoyed redefining tattoo art for them.

“I like being able to bring something new and creative to my town.”

While Gaylord has travelled around the world showing his artwork, the Connecticut native settled in Lancaster to be closer to his family. He said that while his son loves making art, his daughters are not as enthusiastic.

“They told me I make art look like work,” he said.

But maybe his latest venture will help turn that around. He’s now teaching art to the kids in his community and focusing his attention toward more kid-friendly art. Not that he’s giving up on pushing his art and style for adults to another level.

“One of my favorite things about art is that it’s limitless and the only person who can hold you back artistically is yourself.”

Gaylord said he has had to turn people down before, simply because the dynamic wasn’t right.

He said sometimes you have clients who are very difficult right from the beginning. He spends time with his clients, forming a relationship.

“We spend a few hours together, minimum,” he said. “If they are difficult, it sets a bad pace for the relationship. Neither parties will be happy.”

Gaylord said not every client/artist relationship can work. “Not everyone is meant to work together. I would rather not have a bad experience.”

One thing in particular he seems to really enjoy about tattooing is the comradery. He said he’s probably spent most of his career on the road at conventions. He likes getting to see others’ work in person. Plus, he likes the people.

“For me, they are family reunions,” he said.