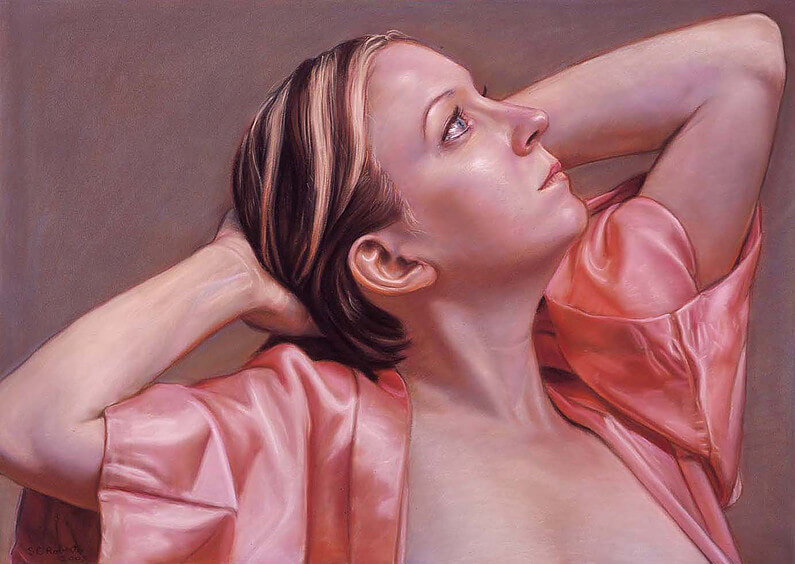 As the recently concluded Olympic Games have reminded us, the human body is a testament to capability, endurance and great beauty. Monuments to ancient Greek athletes were some of the earliest representations of physical splendor, its subjects raised to the level of heroes, ideal embodiments of strength, health, youth and virtue. And the best way to remind one of this corporeal magnificence? In the nude, of course.

Renaissance artists took up this banner again in the 15th and 16th centuries, to which they added scientific study of anatomy and proportion. Nudity in their work was often cloaked in the banner of mythology, religion, allegory or history. In the modern era, most pretense was dropped, and the nude human figure as a subject in Western art was simply an artist’s choice.

Stephen Cornelius Roberts, whose show of oil paintings, drawings and studies continues until Sept. 18 at the Moving Gallery’s Garden of the Zodiac venue, is a proud upholder of the classical tradition. Robert’s exhibition, The Figure: Paintings, Drawings and Studies, features an array of superbly rendered portraits of male and female subjects in a range of studio poses, from artfully draped to distinctively disrobed.

Looking past variable trends in art, Roberts is an unabashed student of the ancients and the Old Masters with a stated passion for Michelangelo, Leonardo da Vinci, Titian, Peter Paul Rubens and Jean-Auguste-Dominque Ingres, among others.

Roberts’ works in all media reflect his engagement with art history, as well as reveal his grasp of anatomy, the complex beauty of the body and the expressive power of the human face. They also demonstrate his pursuit of technical perfection.

As might be expected well into the 21st century, Roberts does use photographs taken of his models as aids to his compositions, which then evolve through drawings and small painted studies. He uses them as guides for color, pose and detail, but vigorously denies assertions that his art is Photorealist.

A movement in figurative realism begun in the 1960s, the aim of Photorealism’s practitioners was to exploit the subtle distortions of photography by reproducing them precisely, tricking the viewer into understanding them as drawn faithfully from life.

At the same time that it borrowed from the impersonal language of mechanical reproduction, the genre also helped reintroduce a form of highly detailed illusionism that, in essence, made it viable again for artists choosing a different path from abstraction and conceptual art.

The case in point for the verism of Roberts’ art is made by the work you first see as you enter the gallery. “Painting of K.P. Pregnant” looms larger than life as a nude portrait of a gravid young woman. It is arrestingly beautiful yet there is nothing overly idealized about the portrait: shown frontally to the pelvis, evidence of her bodily changes, stretch marks and all, are recorded.

She is presented matter-of-factly — while her arms cradle her full belly, this is not a sweetly romantic moment in gestational bonding, a point punctuated by the sitter’s neutral but direct facial expression.

It is the artist, it seems, who is overtaken by the opportunity of depicting this transformative time in the female physique, and the viewer who is able to appreciate that this is both natural and amazing to witness.

On an adjacent gallery wall are a pair of female portraits that provide an interesting comparison. “Painting of L.W. Robed” is a large quarter-torso painting of an African-American woman wearing a loose black drape.

A horizontal composition, the figure is framed by her crown of curls set off by the blank gray wall behind her. A slight shadow cast across her body enhances subtleties in depth, coloration and luminosity.

“Painting of K,” in contrast, is a half-torso image of a nude blonde woman leaning back on her arms. Her image fills the picture frame, a white curtain on the left side of the composition defines the studio setting in a different way, and provides the artist a chance to display his skills at distinguishing among the softness of fabric, the wispy froth of her updo and the taut firmness of her skin.

Perhaps the most distinctive contrast is between the two paintings’ surfaces. The lightly primed “L.W.” allows the linen weave of canvas to show through, where the thicker gesso of “K” allows Roberts to achieve a perfectly planar, nearly fresco–like surface.

Intentionally or not, the latter serves to make the rendering harder and colder, compared to the pleasing warmth that the more textural surface of “L.W.” lends to the skin tones, hair color and garment.

Men are not completely absent as Roberts’ subjects. A Conté crayon drawing and oil study of “R” directly depict a man’s face. More complex are two compositions of a male and female couple. The first, a study, is a three-quarter view of the pair; she is seen frontally with arms wrapped under her breasts; he is posed in a near three-quarter profile, his arm embracing her shoulders as she snuggles close to him.

A larger painting of the same couple as full figures shows a change in attitude. Rather than nestled, they stand with space between them, her hand resting lightly on his shoulder. They are equal but separate partners in this portrait, which in some subconscious way creates a tension that moves the painting beyond a display of personal intimacy.

Lest anyone think that Roberts only has spare settings to offer his models, there are some examples of his experiments with creating narrative environments. Where “Girl with Flower” draws on rich Old Master traditions, “Painting of D.G.” appears to arise from the legacy of boudoir photography.

The tour-de-force among these narrative paintings, however, is “Narcissus’ Sister.” In it, a nude woman looks into a camera on a tripod; on the ground are a number of glossy head-shots and the wall behind her is literally wallpapered with images of her posing, even mugging for the photographer.

The conceit is, of course, conceit — Narcissus being the famously self-absorbed youth of mythology who was fatally in love with his own reflection. It’s hard to say with this painting who is having more fun — the model, the artist or the viewer.

Lots of figurative art’s tropes and clichés are knowingly rolled up into this tidy package. Adding to the festivity are the number of drawings and related studies that accompany the final painting, from small preparatory compositions to large detailed pastels.

All told, the exhibition offers an exceptional cache of artwork, including the opportunity to view aspects of Roberts’ process. Although the works are undated on gallery labels, a few signed drawings reveal that not everything on the walls is brand new.

While this is usually a disappointing development in an exhibition not intended to be a retrospective, it is important to note that Roberts’ work has, for a variety of reasons, seldom been seen in Omaha through the years, including most of the show’s contents.

Fortunately, there is little that feels dated about the work, due to the classicism of his approach, to the neutrality of the studio settings, and to the lack of garments whose styles contain imbedded clues. Perhaps a lack of tattoos, a minimum of piercings and trends in body hair suggest models may date from a few years back.

In truth, this matters little in appreciating the constancy of Roberts’ undertaking. Of his preference to carry the torch for this ancient and academic tradition, Roberts says “I choose realism to portray humans because it allows me the best chance to connect to that form. The nude is as old as art itself and it will always being around … I just want to be a tiny part of that.”

Stephen Cornelius Roberts, The Figure: Paintings, Drawings and Studies continues through Sept. 18 in the Garden of the Zodiac Gallery, 1042 Howard St. The gallery is open Tuesdays through Saturdays from noon to 8 p.m. and on Sundays from noon to 6 p.m. For further information, please contact 402.517.8719 or vmercer3@cox.net.