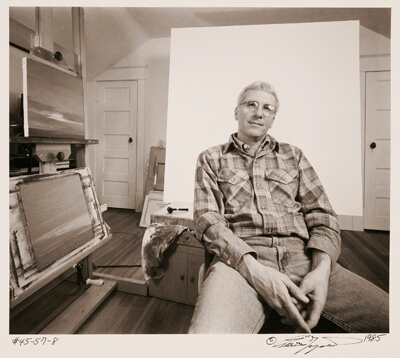 After 40 years of painting prairie landscapes in which nuanced skies get top billing, one might wonder if Keith Jacobshagen has tired of his subject.

One might as well ask whether the tall grass of the prairie has grown bored with the song of the meadowlark.

“I’ll paint until I can’t paint anymore,” Jacobshagen said in a recent interview.

His work is to be found these days in collections worldwide, the product of continuous painting during a teaching career at the University of Nebraska. A decades-long affection for his subject began during his Kansas upbringing. Following a stint in Los Angeles where Jacobshagen designed offbeat greeting cards for Hallmark, it was solidified under the tutelage of Plains painter Robert Sudlow.

His enduring passion is reflected in A Golden Year, an exhibit at the Bemis Center for Contemporary Arts, featuring 365 small paintings on copper, completed by Jacobshagen between January 1 and December 31 of 2010.

Jacobshagen first conceived the project in the 1980s. He enthusiastically accepted the invitation of Bemis Director Mark Masuoka and curator Hesse McGraw to bring it to life, and thus brought forth the current show.

“It was rather extraordinary, though I admit I was nervous about it,” Jacobshagen said of the Bemis exhibition. “I knew I could do it. This project was a chance for me to really absorb myself in something that was going to mean I would have to paint every day … though it didn’t work out that way.”

He got behind, but “catching-up” allowed him to paint quickly, without being finicky, with spontaneity. It’s the way he created when he first began painting landscapes, in plein-air style.

For the first 14 years of his career he painted outside. He worked in a 90-mile radius of Lincoln.

Some 30 years later, the majority of his work is mostly completed in his studio; but is still inspired by the area along the Platte River.

A Golden Year includes a few landscapes and cityscapes from his 2010 visit to New Jersey and New York; endeavors based on uncommon views.

“It was another challenge to be painting in an area so dense, where you can’t see the horizon line,” he said. “But it was very enjoyable, painting in a little village surrounded by hills in New Jersey and New York where so much is going on.”

He attributes his enduring fascination with the land to his father, a passionate fellow who gave flying lessons back in Wichita, Kansas.

“I would drive with my father on the weekend to the little country airport where he taught,” said Jacobshagen, and “360 degrees around me was farmland, and I would see the land and sky through the seasons.”

He was 26 when he realized his connection with the land would be central to his work. After a few years of art school in Los Angeles, he had a  “pre-epiphany” while returning home through Denver. He found enchantment in the horizon.

Meanwhile, he left Los Angeles and completed a degree in graphic design and illustration at the Kansas City Art Institute in 1964.

He worked Hallmark cards, creating “darkly humorous” contemporary cards, and even won an annual award for the most popular card on college campuses.

Hallmark gave him a genuine sense of work ethic, he said, something he took to Kansas University after seeing a landscape painting by Robert Sudlow, then a professor at KU.

“Up until that point, artistically I was doing still lifes, figure studies and traditional landscapes,” Jacobshagen said.

Then, he saw Sudlow’s work at the home of a family friend.

“I went to KU because Bob was there, and that is where I seriously began discovering the horizon line in my work.”

Jacobshagen says Sudlow, who taught painting at KU for 40 years and earned national acclaim, was a catalyst for him. Sudlow passed away in 2010.

After getting his Master of Fine Arts at KU, Jacobshagen began teaching at the University of Nebraska-Lincoln in 1968.

He had his first major solo-show at Sheldon Memorial Art Gallery (now the Sheldon Museum of Art) in 1979, alongside artist Larry Ferguson. The two developed a lasting friendship and have continuously supported one another.

Ferguson, chair of the Omaha Public Art Commission and multi-award-winning artist known for his photography, was with Jacobshagen when A Golden Year opened.

“He has always been so positive and upbeat,” Ferguson said of Jacobshagen. “Through difficult times, through the ups-and-downs of being an artist, we help each other out in every way possible.”

Jacobshgen continues to teach as professor emeritus at UNL, a position he wants to keep.

“For me, teaching is relaxing and self-motivating, something I thoroughly enjoy, and in my point of view, one of the most unselfish things I’ve done in my life.”?

Artist Nolan Tredway, exhibiting his paintings at The New BLK Gallery in August, had Jacobshagen as a teacher in 2002 and recalls his constructive methodology.

“At group critiques, he had a way of getting us to talk about art as a whole – what we thought it should accomplish, where we thought it was, and where it should go, all while seeming to just let it happen,” said Tredway, now co-director of Tugboard Gallery in Lincoln. “I think this definitely helped those of us who knew we were going to be artists solidify some of our stances, while helping some of the people ‘on the fence’ figure out what it was all about.”

Some viewers might view Jacobshagen’s work as potentially speaking to environmentalism. Jacobshagen says he doesn’t intend to make political statements.

“I certainly have an interest in saving the earth, I couldn’t be out there day-in and day-out without having that thought,” he said. “But I’m interested in how it looks visually; I don’t do it because I’m hoping it would change things; I’m pretty practical.”

The tiny, detailed paintings on copper lined up in Bemis Gallery 2 seem to glow from within. The paintings may grip visitors, prompting a moment of reflection in otherwise fast-paced lives.

“I would hope that if my work impacts viewers in any way, that it allows them to understand that they live in a place where they can have their own kind of silent magic,” Jacobshagen said. “A lot of this show is about light, which is itself a great seducer of introspection. And I hope maybe when people are on their way wherever they are, they can find a deep, personal pleasure that is not something you have to pay for, and all you have to do is look.”

Next on Jacobshagen’s agenda is an excursion among lands recently flooded by the Missouri River.

In 2013 his work will be part of a traveling exhibition starting at the Kemper Museum of Contemporary Art in Kansas City. Much of his working is being borrowed from private collections.

A Golden Year is on view at Bemis Center for Contemporary Arts, 724 S. 12th Street, through July 30, 2011. For more information visit bemiscenter.org.