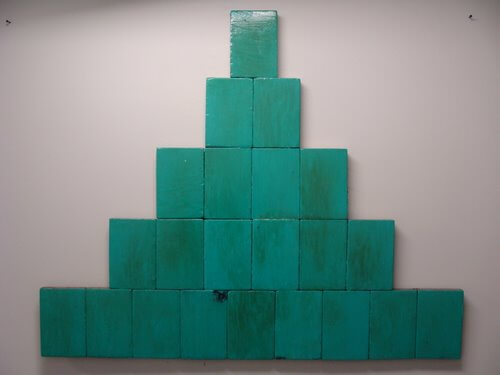 If it’s true it takes a village to raise a child, then likewise an entire arts community is required to raise one of its own to maturity and prominence.

All established artists in the Metro area, regardless of medium, style or genre, have one thing in common: before they “made it” in the market place they struggled in that ubiquitous role of an emerging artist, not quite ready for primetime player waiting for their breakout moment.

For many aspiring visual artists that “moment” may never come. According to the Bureau of Labor Statistics, some 222,000 were employed in the visual arts market in 2008 out of a work force of 120,000,000. That includes fine artists, illustrators, craftsmen, curators/directors and educators.

Despite the odds and obstacles before them local artists have climbed their way to some level of success on the backs of their mentors, the shoulders of others who set an example and in a network of venues that gave them an opportunity and a track to run on.

That ladder to success is a worthy story itself, but one emerging artist who has benefited from it and appears to be on the verge of breaking free of the emergency room is mixed media artist Josh Powell. A BFA grad from UNO in 2008, Powell has been the poster boy ever since for area struggling artists who want to make a difference and a living in the Metro arts scene.

Concerning the former, Powell has been a force in creating a younger arts vibe with DIY events on both sides of the Mighty Mo. Along with collaborator-artist Joel Damon, now the curator of the Bemis Underground, viewers have been treated to a plethora of pre-emerging and emerging talent in past exhibits such as Mountain of Sex and Science Fair.

Though being an arts resource person and instigator may continue to be part of Powell’s agenda, he recently made a bold move forward in his career with his first solo exhibit, Borders and Fences, currently on display at RNG Gallery in Council Bluffs through Mar. 4. Fresh from his recent two person show, Golden Guts, with Kim Reid Kuhn, Powell said it was time for a change.

“This show is about me stepping away from my personal borders and fences that I’ve built around my style of art,” he said. “I’ve had a conversation with Joel, Bart Vargas (artist), Russ Nordman and Jody Boyer (artists and UNO mentors) about this move, and they’ve said it’s all a good thing. I was worried about doing something different and how it would be perceived.”

Until this show Powell has been known and appreciated for his mixed media and conceptual imagery of appropriated photos and geometric patterns. Often with a socio-political point of view. For his first solo he felt appropriately that establishing a new career move might require new and different work as well, at least evolutionary if not entirely a complete departure.

Powell may have been more successful than he first thought. If his name weren’t attached to the show, it is unlikely one would have identified the pyramid shaped wall hangings composed of painted found boxes as his. Stacked and hung in triangular groupings 4 to 3 feet tall alternately pointing up and down, the work references both Mayan cultural patterns and digital video game imagery. A far cry from the busier work of Golden Guts.

“I went minimalist,” Powell said. “I dissected what my paintings consisted of and concentrated on only one part (geometric patterns) that I normally kept in background and turned them into a single piece on their own.”

The result are near 3-D wall installations or reconstructions whose jagged and tiered edges appear to have some sort of magnetic force strong enough to close the negative space between them. It’s a nice effect further enhancing their building block status so appropriate at this point in Powell’s growth. One only imagines that these pieces may someday evolve into full-fledged 3-D or sculptural, free-standing forms, AKA Lego-like blocks, as the artist continues to experiment and push this layering process forward.

Whether Powell has begun to cross over from emerging to established artist remains to be seen as much as it has to do with our understanding of that difference and what it takes to achieve it. Mark Masuoka, director of the Bemis Center, says it’s a given that an emerging artist must have talent, but it takes something else to move forward.

“An artist must have extreme passion for their work,” Masuoka said. “It must take priority over everything else regardless of circumstances. You can’t be deterred in order to sustain a career for a long time. Artists never retire.”

Speaking from experience, Damon knows that passion often begins with a “brave decision” to enter the market despite the financial risks and disappointments. “They (emerging artists) will struggle with delayed satisfaction, being told ‘no’ hundreds of times, having to take shows they feel are below them or their skill level.”

And then, seemingly overnight, emerging artist “pop-out” because a particular venue or event discovers them and offers the opportunity to be seen and networked. Galleries such as the New BLK, Peerless and RNG in the metro area have often served as “middlemen” in launching an artist to a potential career or representation.

“That’s what we’re all about,” said New BLK owner Shane Bainbridge at a recent one night event to help artist Gerard Pefung raise funds for his trip to Cameroon in March. “New BLK isn’t a traditional gallery, but we can help them take that next step whatever it is.”

Exposure is everything for a struggling artist, RNG owner Rob Gilmer agrees, but a venue’s obligation can’t stop there. “RNG encourages artists to keep producing, before, during and after their show. Organizing and producing shows expands his credibility as well as his body of work. The definition of an emerging artist has to include the future.”

Which may be why Damon considers Powell to be a “post-emerging artist” because he has “carved out a pretty major niche in the community” creating sales at his current RNG show even with work in an unfamiliar style. In that respect, Powell resembles another area artist, Iggy Sumnik, who after benefiting from solo shows at both RNG and New BLK, appears to be on the cusp of becoming an established artist.

Though being an “established artist” has evolved along with new art forms in the 21st century, tradition has it that one be represented by a full-service gallery such as Anderson O’Brien and Modern Arts Midtown locally or the sales department of an established art center such as Bemis. These venues bring something special to the table.

“Whether we exhibit or help sell an artist’s work, Bemis is a conduit for their vision,” Masuoka said. “We want to create value, to invest in them so they can start making a living with their art.”

‘Value’ is the key, MAM owner and artist Larry Roots concurs, whose gallery has drawn the attention of such area “post-emerging” artists such as Sumnik, Tim Guthrie and Bill Hoover. “We want to help emerging artists develop a brand, to be recognized and relevant,” Roots said. “But even more, we want to help you manage yourself, to network, to write and talk about your art. A stable artist can’t afford to be cloistered.”

Cloistered or not, fine artists including illustrators made up only about 10% of all those working in arts-related fields in 2008, some 25,000 out of a quarter of a million in the workplace, according to the National Employment Matrix. And many of these “fine artists” hold part-time jobs in or out of the field of art. Jobs of any sort in the art world are not exactly plentiful as any educator, curator, writer or historian is likely to tell you. In its latest study of the American workforce, the NEA estimates that artists are three and one-half times more likely to be self-employed than in any other profession.

This might explain why emerging artists such as Powell are redefining what it means to “make a living with one’s art,” a broader definition of an established artist. Knowing the odds of making it in a gallery stable, he plans to keep reinventing the model in order to sell and be seen. To cross over borders and knock down fences for others and for himself.

“I’d like to create my own design start-up,” Powell said, “one devoted to creating small 3-D objects, toys and collectibles as an extension of any paintings. People love to collect things that remind them of a favorite art show, that make them laugh.

“It’s my way to offer work at a different level. I want to help create the vibe as well as be in it. Hopefully, the pay-off will come later.”

Borders and Fences continues through Mar. 4 at RNG Gallery at 157 West Broadway in Council Bluffs. For details go to dixiequicks.com/category/rng-gallery/