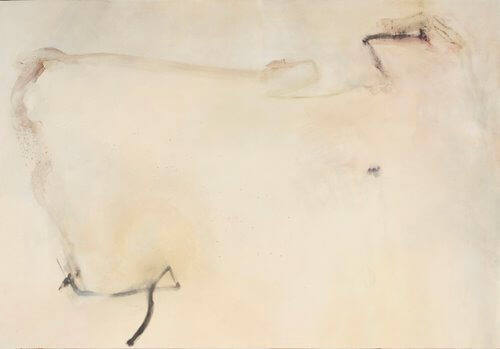 In the light of the recent deaths of abstract expressionist painters Helen Frankenthaler and Pat Passlof, both 83 and known for their masterful use of color, who continues to work in this challenging style? Locally, only a few come to mind in this continuous mission to define the indefinable through their art.

Kim Reid Kuhn and Cherisse McCoy do wonders with color and expressionism.

Eliska Greenspoon, whose show at the Fred Simon Gallery is still up through January, creates elegant storytelling in her abstract work. But the heart of the craft, the love of pure materials and devotion to allowing the medium work itself out in the process, is how artist Larry Roots raises the bar, just like Frankenthaler, and Passlof before him.

In Modern Arts Midtown’s inaugural solo exhibition, co-owner Roots hits the ground running with Larry Roots: New Work and Selections from the Last Decade, with paintings and sculptures from 1999 to 2011.

Viewing his work, starting with the large gray polymer piece from 1999, “Presence of the Mind,” to “Vessel,” a subdued painting on wood, to figurative abstract pieces from 2002 and 2010 and mixed media, wood and bronze sculptures throughout the decade, his style and point of view seem to stay relatively on par.

Yet, Roots admits to sometimes going back to revisit old series and ideas.

What has evolved, perhaps, is the artists growing comfort and appreciation for the medium he works with.

“I love my materials,” Roots said the day after the successful opening reception. “I enjoy the challenge of each new piece; transcending the materials…the diverse mediums feed off each other.”

Which is true for the show which spans the entire gallery space. From the front galleries, relatively newer, mid-sized acrylics on canvas and oil and pigment on wood show his shy color style and reserved approach to composition. The bright yellow “My House” from 2010 is sunny and tells a story with a hinted stroke of a person running with another profile in a window.  His signature strokes are more apparent in “Over and Beyond,” oil and pigment on birch, from 2011. The wood is evident in the piece, almost allowing it to speak for itself.

In the back of the venue, larger pieces reveal more abstract contemplative messages in his mark making, his noted artistic process for investigating the unexpected.

Sculptures enhance the experience such as “Identicality,” bronze and aluminum forms that seem to be left gracefully in the pure nature of the materials.

Step back and the pieces seem to turn into moving form. “Presence of Mind” becomes rolling mountains, “Extrapolation” is like dust in the wind; “Causation” is the night sky.

Turn around once more and you’re faced with “Fluidity” in the corner of the back gallery—and rightfully so.  The large piece in 2004 is one from a series, more reminiscent of Jackson Pollock’s highly gestural works. Nonetheless it’s still true to Roots’ style of allowing the material to guide the art. Though it seems to stick out from the somewhat casual, contemplative rest of the show story, it’s a fun kick in the pants, reminding you not to forget where you are.

The other side of the gallery, near the artists working studio, gives you a sense of his versatility from the 3-dimensional canvas sculptures, his elongated bronze figurative sculptures, the geometric paintings as of late, and a personal favorite, the haunting abstract figures.

It’s these figurative works, dark, difficult to distinguish, that almost define his artistic language.  “Memory” (2002) and “Head Series” (2011) seem like someone was there in the dark and the lights were quickly switched on, then off, and the artist was left to define its presence. Eyes, mouth, beautiful rendered with his trademark strokes set in his abstract atmospheres provoke mystery and curiosity for humanity and the world around us.

It was his figurative work he was most known for in the mid-1990s according to “Painting is Language,” a 2009 catalog of the artist by Nick Lange. In the book,  open for gallery viewers to see more of his complete career, Roots was quoted as saying: “It began with a mark that was studied, turned and pondered.”

This quote can perhaps define this show, as the artist continues to study and ponder his process, affectionately honoring his materials as he goes. His early works evoke this exploration with greater aggression. His later pieces are done with more repose. All with authenticity and pride in the craft as he knows it, working to honor and re-enlighten this style so new and exciting years before.