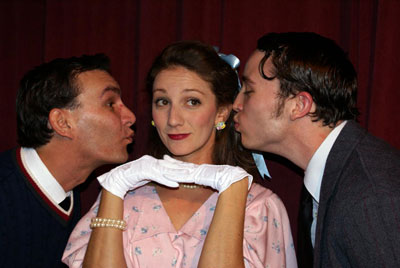 Is it worth driving south from Omaha’s Midtown to Bellevue’s Olde Towne to see a 70-year-old romantic comedy? If it’s The Philadelphia Story with Audrey Fisher in the Kate Hepburn role, it’s worth driving all the way to Kansas City. Fisher shined recently in RENT , but I didn’t dream she could tackle the Hepburnesque banter of this comedy classic. And don’t tell me you saw Grace Kelly doing Tracy Lord in the musical version, High Society . Grace was grape juice compared to Audrey’s sparkling champagne. Director Lorie Obradovich has worked with Audrey before and paired her here with Brandon Rohe as Dexter Haven (first Cary Grant, then Bing Crosby) and Joe Fogarty as journalist Mike Connor (Jimmy Stewart, then Frank Sinatra). Rohe’s no Cary Grant but he meets the main test: you root for him to win back Tracy, the ex-wife he calls Red. Understand this above all else: for fans of the great Katharine Hepburn, the witty Philip Barry script offers opportunities to experience the essence of her style and personality. What’s amazing is how consistently Obradovich and Fisher combine to deliver moments that almost perfectly captured those qualities without imitating them. And she wasn’t the only one. Early on, Ashton Taylor, a Millard South sophomore, nearly steals the show as a delightful Dinah, the younger sister. When the writer (Fogarty) and photographer (Mary Trecek as Liz) arrive to spy on Tracy’s wedding to big, stiff George Kittredge (newcomer Jason Wegner), Dinah puts on a delightful act to entertain them. Fisher’s Tracy adopts even more outrageous affectations for their benefit, batting her eyes under a broad-brimmed hat and making a melodramatic plea on high, “Promise me it won’t rain.” I wish I could replicate one priceless moment in Janet Macklin’s performance as their mother when she responds with a nervous laugh at Uncle Willie’s frisky posing as her husband. And Wes Clowers makes the most of Willie’s fun-loving presence on the day before and the day of the big wedding. Tracy’s father, played by Jack Hogston, sets part of the plot in motion by showing up with a showgirl in a scandalous tabloid article. Jay Huse as brother Sandy adds a sub-plot to squelch the article, and Ms. Taylor’s Dinah encourages chaos by inviting Dexter, Tracy’s ex, to lunch at their Main Line Philadelphia mansion. Much of the magic of this romance emanates from the complexity of Tracy’s character. Dexter blames their breakup on her status as a virginal goddess who suffers no human weakness. Her father makes a similar accusation when she chastises his infidelity. Nobody seems too thrilled that she’s about to marry a coal company manager who pulled himself up by the bootstraps, unlike his wealthy bride-to-be. Wegner seems a bit wooden in that role, but blame much of that on the role. We’re not meant to be fond of him. Fisher’s performance would carry the play even without solid support, but it adds immeasurably that she’s so handsomely costumed by Wesley Poirier. And she’s handsomely surrounded by Hogston’s settings, the Lord family sitting room and the porch. We don’t need to see the swimming pool, just the robed aftermath of the skinny-dipping. And, for fans of the movie where Bing Crosby sings “True Love” to Grace Kelly on the sailboat of the same name, the play simply reminds us that the craft was “yar,” an insider term that adds to George’s sensitivity about being an outsider. Designer Hogston wasn’t the only one doing on and off-stage duty. Daniel Baye was the subservient butler Thomas on stage and handled the pleasing sound design. Fisher’s lead role didn’t prevent her from serving as lighting designer. It wasn’t the first well-polished production in the Bellevue Little Theatre’s 42 years, but it was as perfect a romantic comedy as I’ve seen in many years. And it’s guaranteed to make you a huge fan of Audrey Fisher. The Philadelphia Story runs Nov. 5-21, Fri.-Sat. 8 p.m. and Sun. 2 p.m. at the Bellevue Little Theatre, 203 W. Mission Ave., in Olde Towne Bellevue. Tickets are $15, $13 seniors, $7.50 students. Call 292.1554 or visit bellevuelittletheatre.com.