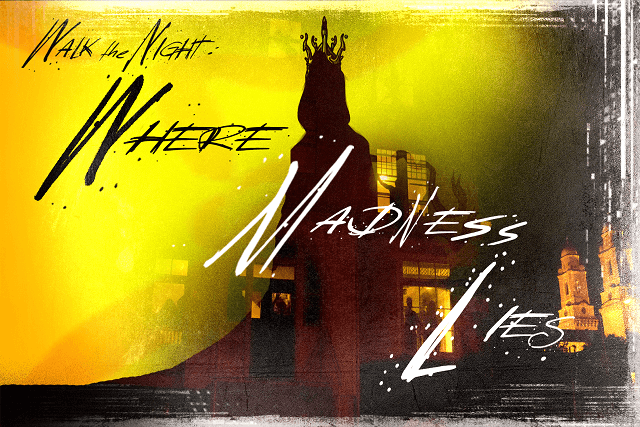 If you are familiar with Shakespeare’s King Lear you will certainly encounter elements of it in Walk The Night, Where Madness Lies produced by Blue Barn Theatre. Knowing the play may lead you to expect characters, scenes, developments which may never materialize. Thus, a lack of familiarity with the original could be a significant advantage. After all, what you see and hear depends on your perspective. Because, as you may already know, you choose where to walk; you choose what to watch.

No matter what you do, you will be exposed to a variety of emotionally- charged characters living out moments derived from what Shakespeare wrote. Not necessarily concluding who they are, emoting right in front of you, your response, your perception depends on what you bring to the equation. You’d get more out of this by attending with an open mind.

Director Spencer Williams has taken the basics of the play and dispersed them into several parts of an ex-convent now called Starlight Chateau to create a collective, simultaneous experience. It seems unlikely that, in one 75 minute visit, you can be present for all the fundamental events.

Williams seeks to reach out beyond the conventions of traditional theatre. He may be suggesting, via the phrase “where madness lies,” that you are in some kind of an institution for the mentally disturbed and this is not meant to be a production of the play. Maybe this is a human version of a zoo.  Suppositions. Choose your own.

In my one visit, I saw a presumably royal woman bestow land and property on two of her daughters, disowning a third who refused to be like her sycophantic sisters. This took place in an open courtyard under a chilly night sky.

In that same courtyard a man opened a dismaying letter. He showed it to me and then wordlessly engaged me in casting tarot cards in a small closed room.

Elsewhere that same man was blinded by a woman and another man. The second man, gyrated, stooped and bent as if he had no control over his body, all the while repeating what the woman said.

The royal one and other people paraded around the unheated halls. Some ran up and down stairs, sometimes muttering, sometimes speaking things not easy to understand. More than once another woman, arching and crouching, repeated, echo-like, another person’s words.

Later the same royal one made a few speeches in the well-lit reception hall where the promenade had begun. And two men strenuously grappled and wrestled, merging those movements into something dance-like..

Some of the inhabitants of this distorted, isolated territory may want to take your hand and lead you elsewhere. There’s nothing to fear. They will not harm you. They just want to show you something. And, if you chose, at any time you can stand right next to such presences as they interact..

When you visit, possibly what’s described above will look and sound different and occur in other places. This feels as if it can be quite fluid.

Knowing the essence of the play, I can figure out where those scenes dovetail and who some of these individuals are supposed to be. I won’t identify them. After all, identities seem to be kept vague. Let me not to the marriage of like minds admit impediments. Moreover, as an attendee, you’re given a mask, as if your identity is likewise unspecified.

Don’t expect all the essence of the source; that will impede you. In King Lear Shakespeare wrote magnificent, emotionally resonating, multi-level theatre full of eloquent speeches. This goes elsewhere. Even up close, in whatever space, walled or open, you remain outside. Dress warmly.