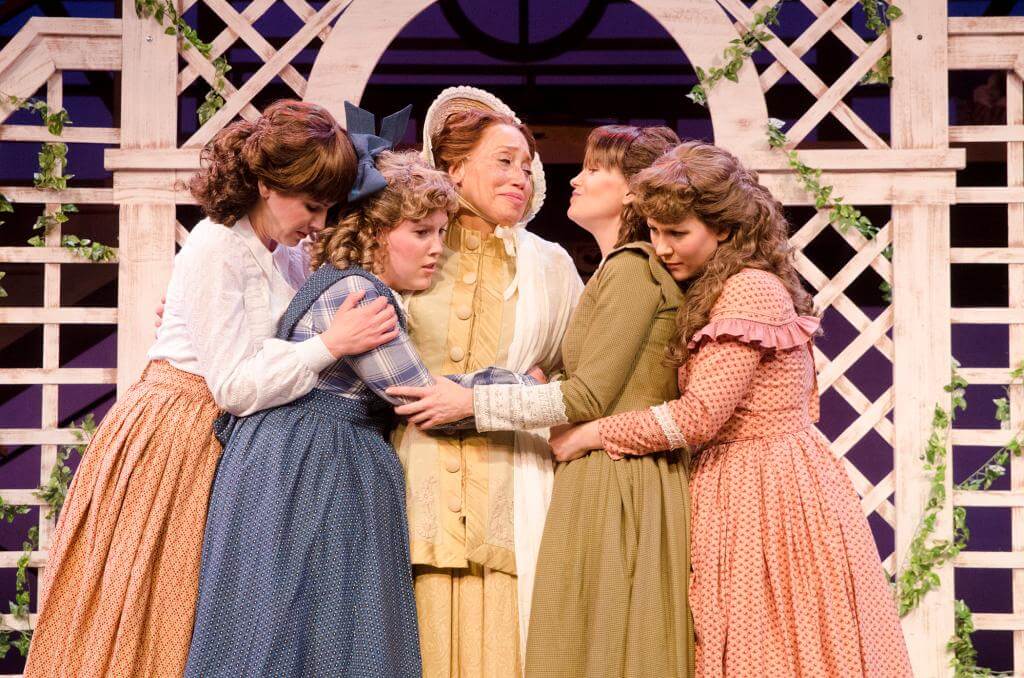 The musical version of Little Women at the Omaha Community Playhouse got off to a shaky start before completely winning me over.

The first thing a male reviewer notices is that he is vastly out-numbered, gender-wise, by a female audience that’s probably far more familiar with the classic novel by Louisa May Alcott.

I hoped it would help that she entered my childhood early, joining Mark Twain and others in a deck of cards called “Authors.”

Maybe more familiarity with the story of Jo March, the tomboy sister and aspiring writer, wouldn’t have made Sims Lamason’s treatment seem so overdone at the beginning. She’s the lead role so it takes some getting used to her hunched-over posture and her vocal delivery before crediting her creation of a vivid and memorable character who cries “Christopher Columbus” when exasperated.

Add the problem of the second number finding all four sisters singing in the attic, well back from the audience, and I didn’t have a clue that they were singing about “Our Finest Dreams.”

But all is forgiven when Camille Metoyer Moten as their mother Marmee follows with “Here Alone” while her husband is off to the Civil War as a chaplain. After those earlier lost lyrics, every word, every sentiment of a wife left behind with four children and yet bravely accepting her lot, is fully felt and heard.

And from then on almost every scene seemed close to perfection, whether it was Aunt March (Deborah Curtis) admonishing Jo or the girls getting dressed up for the ball. Told she looks “very alluring,” Jo says, “I think the word is ‘alarming.’”

Preparing the show for a potential national tour works against casting different girls as the sisters grow up. Thankfully, the talents of director Susan Baer Collins and her professional cast provide the necessary contrasts to portray the passage of time.

When Meg (the lovely Leanne Hill Carlson) had “the best time of my life” at the ball, she says, “I may have left here a girl but I came home a woman.” So the youngest sister Amy (Jen Morris) feels left out, and Marmee promises, “Your time is coming.” Amy pouts, “My time will never come,” and stagger-stomps across the stage.” And her time does come as she marries in Act Two.

If Marmee’s “Here Alone” started the win-me-over ball rolling, the arrival of Tim Abou-Nasr as neighbor Laurie scored a winning goal. Anyone who enjoyed him in such Playhouse roles as Bat Boy or the biblical Joseph was glad to see his return from national tours and cruise ships.

His bright-eyed enthusiasm as the orphaned Laurie, living next door with his grandfather, is exemplified when Jo wonders why he’s smiling at her. “You make me beam,” he says.

Bill Hutson, winner of more Fonda-McGuire acting awards than anyone in the theater’s 90-year history, is the grandfather, and, as usual, you wish this masterful performer had more time on stage. He shares a sweet “conversion” scene with the musical sister Beth (a low-key sympathetic Carly Schneider) when her piano playing charms his gruffness into a lively duet called “Off to Massachusetts.”

As Laurie’s tutor, William R. Pope makes a believable beau for Meg, and Chad Bradford as Professor Bhaer both opens and ends the story, first by criticizing Jo’s writing and then by returning to propose marriage.

Keith Hart conducts and plays keyboard for a nine-piece orchestra, though one suspects a single keyboard would suffice when the show tours.  It isn’t the sort of musical with big production numbers, confining choreographer Melanie Walters to such delights as the sisters and Laurie dancing and singing to “Five Forever.”

Arrive early enough to read bios for a cast with four familiar faces and six newcomers.  Although Sims Lamason was born here, the mother of twins hadn’t performed in Omaha.