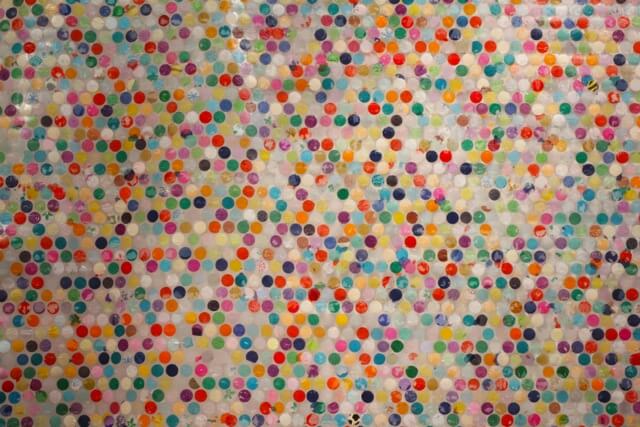 When in 10th grade, my English teacher, Mr. Hoover, gave my class the assignment to write an instruction manual for an everyday, super common object. I chose the tape dispenser. Meticulously describing how to take the tape out of the box and place that tape dispenser thing in the center of the tape cartridge and then how to place it in the dispenser was gruesome.

Line after line of cumbersome descriptions and made up names (what is that small piece of paper called at the end of roll of tape?) my assignment was complete. I turned it in and forgot about it. That is, until I saw Angie Seykora’s solo exhibition, Working Materials at Lied Gallery – Creighton University.

Angie Seykora: Working Material, which continues through Feb 15, examines pattern, material, labor, and perception through her process based practice. The work emerges as a refined material study.

This is nothing new in contemporary art. Material focused exhibitions with large amounts of stuff, be it found or acquired, fill gallery spaces to invoke either A. “gee that must have taken a long time”, or B. “wow, look at all that stuff”. Seykora’s work skirts both of these obvious solutions in an elegant way.

The rhetoric surrounding the countless hours of fabrication and girth of materials is downplayed. Instead, there is a sense of an “almost obsessive” nature to her work. Materials are allowed to be a little messy and imperfect.

The nuances of an out of line piece of tape or piece of confetti are present. Her work, while an accumulation of large amounts of material and time, create immersive spaces for personal memory to flood in. The perception in the subtleties of these materials is a strength in Seykora’s practice and exhibition.

Entering the Lied Gallery’s octagonal space, an immediacy of materiality is felt. Hanging from the ceiling is “Knobby Chain,” a large wooden bead chain, which I quickly walked past eyeing one of several woven panels that filled the gallery.

These seductive woven panels are cleverly deceiving. Getting closer and closer (and closer) the structure and pattern wax and wane. Then, the small teeth marks from the tape dispenser become apparent. There are sub-sub-sub patterns in these woven tape and tinsel works.

This might sound  hyperbolic, but it’s not. These works invoke a labor intensiveness, but this is far from the focal point. Seykora’s focus on pattern, layering and most importantly, scales of perception reign. The most stunning of these pieces is “Crystalline Panel,” a large panel resting on the floor. The way the plexi support bows provide an alternative view to the otherwise standard-viewing height of the other four tape and tinsel panels.

Each subtly different panel has fringe remnants, which are un-meticulously allowed to exist as a reminder of the making process.

“Confetti Curtain,” a draped piece of vinyl covered in hundreds of round confetti arranged in a grid, is visually arresting. Like a Damien Hirtst dot paintings the question of hand or machine made is at the forefront.

This is not a piece of wallpaper, and it is not constructed by a machine. The intricate details of hand placed confetti is captivating, particularly the details found within the monolith. Snowflakes emerge, patterns form and off-kilter moments show Seykora’s hand in the making.

Next to “Confetti Curtain” is a series of monotypes also using confetti. These works are an odd juxtaposition to the other works in the space – which have a directness and immediacy. These framed, small monotypes (without Seykora’s explanation) remain a mystery.

Similarly, the floor sculpture “Huddle Band” seemed like an odd inclusion. This work, which is a wash of blue rubber bands and contorted placemats, sits unassuming on the floor. This works seems counter to the rest of the exhibition.

Gone is a direct purposeful use of material and perception inducing neurosis. Instead, there is an offhandedness to the installation that comes off as haphazard and reaching.

Entering the second gallery, “Chevron Arc” sits with a striking ombre effect of small puffballs contorted around a piece of chain link fencing. It beckons further inspection and instagramming.

Adjacent is another tape and tinsel panel hanging on the wall. This one, however, is on a perplexing panel, reminiscent of a shower door, complete with handle. Its horizontal orientation is full of the same layering of tinsel and tape.

Upon reading the curatorial essay by Amy Nelson, an additional sphere of Seykora’s practice involves using materials that would otherwise be thrown away, or were found at a second hand store – including this door.

This second gallery also shows another set of monotypes, which host the same awkward transition to the other works in the gallery. These, however, are the “ghost” prints to the works in the first gallery. Through a lost sense of intimacy with material, these monotypes seem at odds with the rest of the work in the exhibition.

Angie Seykora: Working Materials is an amalgam of familiar yet completely alien materials. These materials, such as scotch tape, are so banal that their potential and possibility seem endless. To Seykora, whose material research shows a conscious awareness of art history, critical theory and personal perception, refined forms coalesce through the act of making.

Her solo exhibition demonstrates a purposeful intent to create an instruction manual through materials for personal perception. An impressive confluence of material and craft.