Home » Art » Literary » Love Above and Below the Surface. 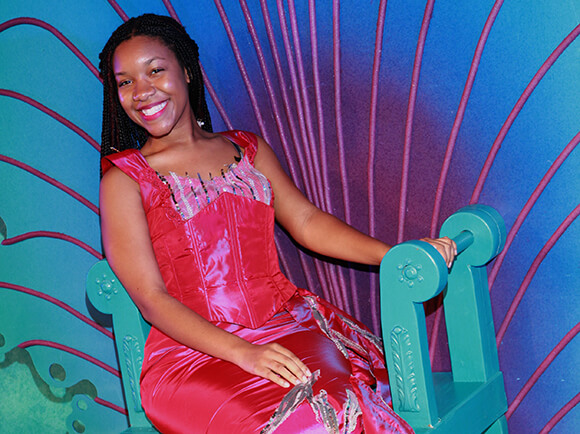 A stage version of the 1989 Disney movie musical The Little Mermaid swims into view at The Rose Theater. With a 23-member cast and a promise of many production numbers, this could display how and why the show flourished on Broadway for 19 months and got considerable acclaim, especially for its Tony-nominated songs.

The spin-off from the animated version of a Hans Christian Anderson tale plumbs a story about a mermaid who dreams of the world above the sea, giving up her voice to find human love. Ariel had been one of the best singers in her talent pool, yet she vows to venture above the waves in spite of the warnings of her father, King Triton, and her friends Flounder the fish and Sebastian the crab. She makes a dangerous deal with sea witch, Ursula, when seeking to unite with the human Prince Eric who had been enchanted by Ariel’s voice. The film’s storyline has been expanded to give greater depth to Ursula and King Triton. And, of course, a moral lies just beneath the surface:  You can rise above everyone’s expectations, including your own.

Alan Menken wrote the music, Howard Ashman and Glenn Slater the lyrics. Menken’s score for the movie plus those for Aladdin, and Pocahontas won Academy Awards. He also created Broadway melodies for 1992’s Newsies (seen at the Orpheum earlier this year) garnering him a Tony, plus Sister Act from 2009. Menken is the second most prolific Oscar winner in music categories. He took home 11 Grammys. Lyricist Howard Ashman was a long-time collaborator with Menken in Disney films, including Aladdin, plus stage and screen versions of Beauty and the Beast and Little Shop of Horrors. Glenn Slater wrote words for the songs of Sister Act, plus for a couple of Andrew Lloyd Webber productions and more.

Doug Wright came up with the book for the movie and this subsequent stage transformation. He received the Pulitzer Prize for Drama in 2004 for his play, I Am My Own Wife. He wrote the script for much-Tony-nominated musical Grey Gardens and, among others, Hands on a Hardbody which you could have seen at the Playhouse last year. Plus teleplays for Hallmark Entertainment and HBO as well as screenplays for Fine Line Features, Fox Searchlight, and DreamWorks SKG.

The Rose production is directed by Matthew Gutschick. Tim McMath created the set, Brittany Merenda the stage projections, with costumes from Sherri Geerdes. Kevin Smith is the music director.

“This musical, buoyed by one of the best Disney film scores…succeeds as enjoyable family entertainment,” said an  Associated Press review of the Broadway production. And the Wall Street Journal praised it as doing justice “to the lovely film from which it sprang.”