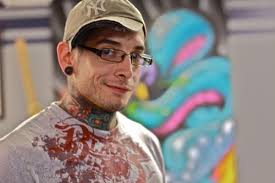 Cleaning up after an early morning session, Renken is constantly moving as he talks about his last 14 years in the tattoo industry.

Born in Holdrege, Neb., Renken started his apprenticeship right where he is now, at Big Brain here in Omaha, where he worked under one of his biggest influences, the talented Chris Blinston.

Renken said he started out doing largely new-school, heavy color saturation work but he said he’s not sure that kind of work will hold up in 10 or 15 years. He’s currently more interested in the Japanese style of tattooing. He said he likes the layout, culture, subject matter and longevity of it.

“That’s where I’d like to see myself going,” he said. “There’s definitely a right way to do it and a wrong way to do it,” he said laughingly.

Renken said he enjoys his work best when he’s given some freedom. He said most people come in with an idea of what they want and he takes it from there, elaborating on their vision.

“A lot of stuff I do, I just draw it on directly,” he said. “It suits me a little better. I like vague ideas best.”

But there’s also stuff you just can’t do. Some tattoo ideas just aren’t realistic. He said he has to refuse work all the time because sometimes people just want too much, “like when someone wants 20 different things in one design, I’ll refuse stuff like that.”

Naturally, no artist wants to do a tattoo they’re going to regret later. Though Renken said he has done plenty of that.

He started his career from home, which is pretty common. But Renken said he wouldn’t recommend that to anyone.

“I had friends who tattooed and they helped me get equipment and I wrecked my friends,” he said. Plus, it can be unsanitary and unhealthy.

His advice now is “Get an apprenticeship and do it the right way.”

However, Renken said even the tattoos he’s most proud of when he first finishes them can become unimpressive to him if he looks at the pictures too much.

“Looking at them more and more, I start finding flaws and I end up liking them less,” he said.

But when he doesn’t dwell on the pictures and their perceived flaws, he’s able to enjoy his work later on. “I do like, months and months later, running into someone and seeing it in person and thinking, ‘Now that’s cool.’”

Though Renken has worked in several tattoo shops around the U.S., from Jersey to Houston, he said he said he’s very happy where he is.

“I love the Midwest. My favorite place is Omaha.”

Which is part of the reason he isn’t really into the tattoo conventions as much as he used to be. Though he used to do 15 to 20 conventions a year, he said this year he will probably only do two, including the Best in the Midwest.

The main reason, though is his family. He has two sons, Brayden, 8, and Cruz, 3. Plus there’s “my beautiful wife, Lisa.” Between the basketball, baseball, Lego building and hanging out with Lisa, he said his life is “pretty packed.” And he definitely seems to be loving it.

“I tell my wife all the time, “If I won the lottery, I wouldn’t quit my job,’” he said. “This is what I do, what I like to do and what I’m really good at … and I get to hang out with my friends all day and do cool stuff,” he added with a laugh.