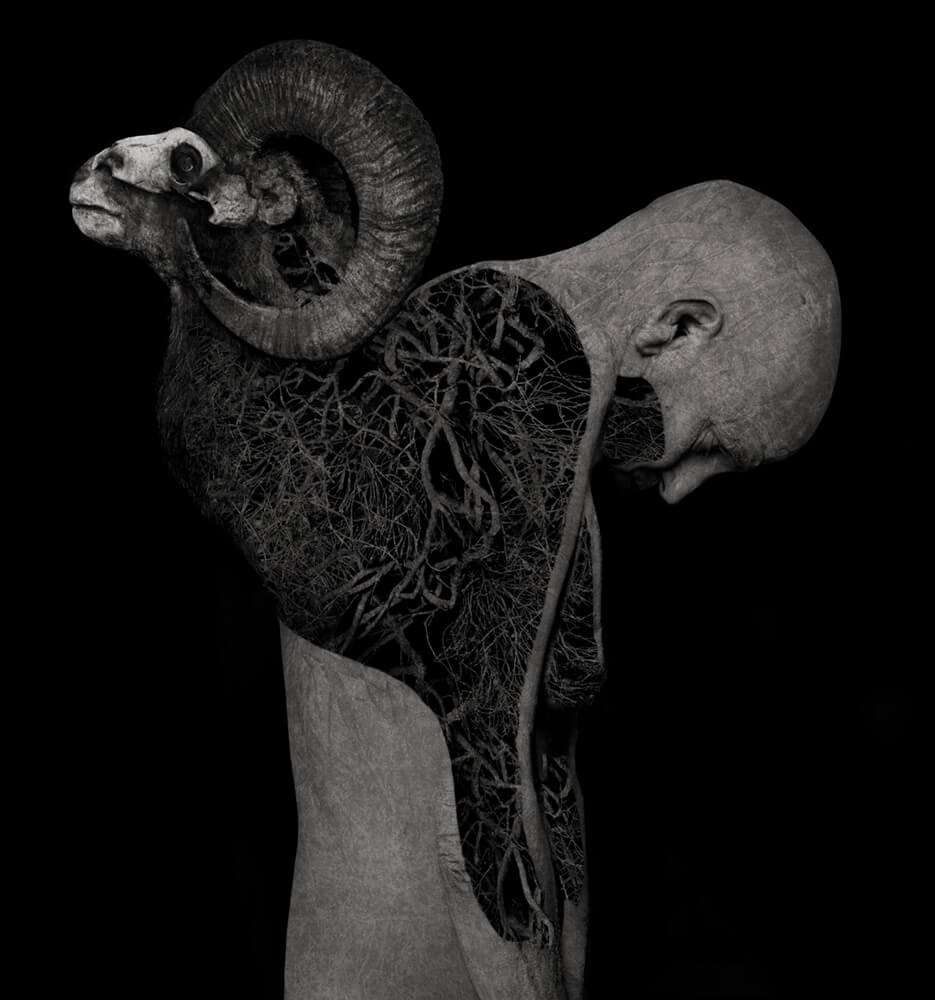 There is something about a two-person art exhibit that raises certain expectations. That is, aside from quality, interesting, maybe even innovative work from each. And that “thing” is expecting the two artists to have something in common. Otherwise, it’s just two separate solo shows doing their best to perhaps fill a space too large for either.

At first glance the latter seems to be the case for the Moving Gallery’s current exhibit in the Garden of the Zodiac, which continues through Nov. 22. Two apparently disparate artists from Italy, Roberto Kusterle and Fulvio De Pellegrin, and two separate titles: Kusterle’s The Marks of Metembiosi and De Pellegrin’s Singular Thinking. Other than their origin or shared medium of photography, what could these wildly different artists have in common?

Given the huge disparity in the genre, imagery and palette of each—Kusterle’s startling black and white hybridized figures and De Pellegrin’s colorful, exotic scenarios—one might accurately surmise that what these two share is a love of fantasy and the fantastic. That, and the attempt to raise expectations of the medium itself, particularly in an era devoted to pop cultural selfies and a relentless deluge of Reality TV.

In either case, both photo artists express dissatisfaction with photography as mere documentation or illustration. De Pellegrin exhibits a theatrical and often satirical point of view by substituting animals for humans in extraordinary settings and circumstances. His ironic, quirky narratives resemble circus posters and movie stills, the tone shifting from Disney to Tim Burton. On the other hand, and in the same room at the Old Market Passageway gallery, Kusterle’s nude male and female figures have evolved or devolved into veritable statues or mannequins, human, animal and vegetable.

The human/mineral composite Kusterle saved for another show recently at Modern Arts Midtown called aptly, Stone Marks. Though the work at MAM featured portraiture, and thus more audience engaging, in either case, his enigmatic, some may add bizarre, transformations benefit from an aesthetic both photographic and sculptural.

Placing these two shows in the same space in the Zodiac gives the viewer the impression of entering a carnival sideshow or video arcade, and a wax museum of the macabre. De Pellegrin’s images include swimming polar bears and baby toys (“Mother”), mice and cheese graters, a deer and antelope at play at the foot of a decaying throne of an easy chair (“Ancestral Throne”), tubas and honking geese in a tiled bathroom (“We dancing, we singing”) and a satisfied pig in a pink marble bathroom (“The Bread, the Love, the Dreamer”), to mention just a few of his entertaining, but at times, bewildering juxtapositions.

These are among his more frivolous, playful tableau. But there are more serious set pieces as well: A battle at Waterloo reenactment (“Lorsque le banquette ce pour mi”), an Edgar Allen Poe-like figure—perhaps the intended poet himself—interrupted while reading in bed by a flock of ravens, real and imagined (“Nevermore”). Most telling and likely, De Pellegrin’s most successful and biting satire in the show—this time curiously sans an animal, literally that is—is a supine cleric at the feet of his bishop, while a young altar boy takes careful aim at his derriere with the proverbial sling shot (“Pater et Filius et Spiritus Sanctus”). Revenge, anyone?

Meanwhile, Kusterle’s imagery is dominated by three major motifs: strange disfigures with eyes closed that have not only morphed into sculpture (one), but whose etched and tattooed surface have either begun to decay exposing veins and tendons more resembling tendrils and vines (two) or have merged with some form of the animal kingdom (three) including foxes, falcons, porcupines, rams, ferrets, even eggs. Unlike Kusterle’s more regal, meditative “statues” in his series Stone Marks, his objects here are more deliberately conceptual and isolated from the viewer despite a nearly hypnotic fascination with two things: their disfigurement and Kusterle’s undeniable wizardry with technique and style.

The question remains: how did he create these hybrids of subject matter and mediums and why? The first part is fairly “simple.” True to his past work, the stage is first set with a painstaking process of costume—or lack thereof—makeup, set design and posing. But in his two most current series, as with De Pellegrin’s work, once the image is shot, it undergoes considerable digital manipulation for meaning and visual effect, something else the two artists have in common. This should be obvious. What is not is Kusterle’s intent other than process experimentation.

The answer may be with the show’s title. A common definition of “metembiosi” or metabiosis is a “condition in which the growth and metabolism of one organism alter the environment to allow the growth of anther organism.” Or, more simply, “the parasitic dependence of the existence of one organism on that of another.” Rather than explain the meaning of Kusterle’s work, the literal definition only heightens the conjecture.

Because the human figures all have their eyes closed and seem to have turned to stone while the animals appear to be alive, wide-eyed and alert, one may assume who is the parasite. And if so, the natural order of things that humankind “enjoy” a symbiotic relationship with its environment has devolved into dominance rather than co-dependency. It appears that in Kusterle’s world the survival of the species is doomed, but don’t they look fantastic, amazing even, as they exit in the transformation?

This is a rather grim interpretation, if indeed that is what the artist intends, but as in the past, neither he nor De Pellegrin are didactic. In fact, Kusterle has a history with both the Moving Gallery and MAM of maintaining a balance between the forces of life and death and the struggle to survive either in the face of absurdity with a sense of grace, dignity and beauty.

This was particularly true with his series of mythical narratives, Without Time and Place (2011) that featured ordinary man behaving heroically, existentially, against impossible odds and forces, natural and supernatural. This was a remarkable series, even more extraordinary as it eschewed digital manipulation. De Pellegrin too made an auspicious entry in the Metro art scene with his own set of images, a dark perspective of Sicilian catacombs that appeared in the Moving Gallery’s stunning three-part exhibit, Time, Death and Beauty in 2010.

Over time then, both artists have one last thing in common. Each has distanced or detached himself from the viewer with work that is less expressionistic or personal. De Pellegrin’s tone has become light, nearly undermined by, even in the more serious pieces, its clever personification of animals, which risk lessening the piece’s impact. One misses the darker, edgier point of view he has exhibited before.

Kusterle has maintained his avant-garde technique, but the work has become more like studies that elicit curiosity or admiration rather than an identification. Still, with The Mark of the Metembiosi, the artist continues his experimental and imaginative mastery of his medium. Both Singular Thinking and The Mark of the Metembiosi demonstrate their ability in this two-person show to grab one’s attention, but how long they hold it remains to be seen.

Singular Thinking and The Mark of the Metembiosi continue through Nov. 22 at the Garden of the Zodiac, 1042 Howard St. in the Old Market Passageway. For details and hours, contact 402-517-8719 or vmercer3@cox.net.