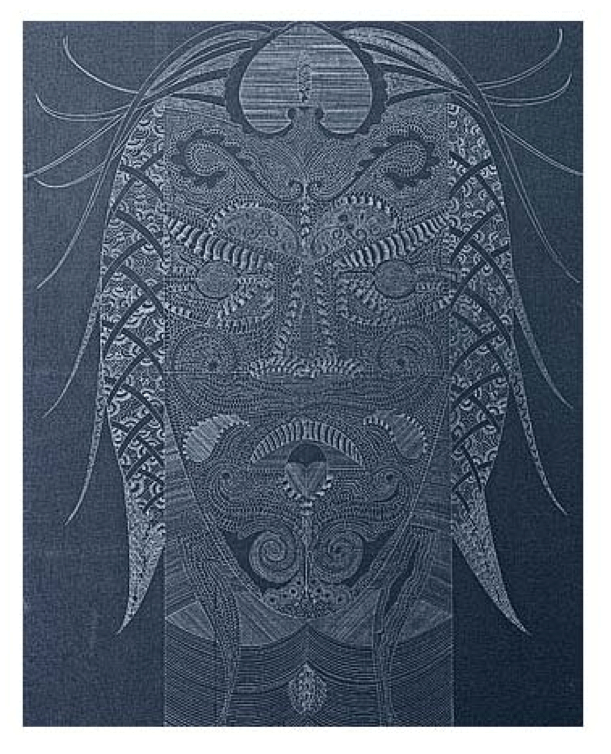 It may not be possible to identify a Metro arts “look” the way one readily identifies a “sound”—thanks to Saddle Creek Records and its ilk—but the area does have a handful of visual artists who leave a recognizable mark on the local scene and memory.

No one has yet connected the dots, but the Metro continues to enjoy its 2D and 3D favorites that include such signatures as Kaneko, Joy, Statom and Mercer. Add to that list the familiar and accomplished work of a Broghammer, Bruning, Narwicz, Hoover, White and Ewing, to name but a few, and though the whole isn’t yet greater than the sum of its parts, at least a pattern of familiarity begins to emerge.

Yet a “look” only familiar risks contempt, as the saying goes. This is especially true of contemporary art which demands at the very least invention and originality, at the most, provocation and controversy. A short list of local artist who fit as well as raise these expectations include Catherine Ferguson, Tim Guthrie, Iggy Sumnik, Jamie Burmeister, Ying Zhu and Rebecca Herskovitz. There are others, of course, but the above seem most willing to risk convention for the sake of their art.

Now add to the above growing hierarchy of Omaha originals the name of Mike Tegland. Though not exactly a fixture in the Metro art scene, Tegland has quietly made an impression with his remarkable black-on-black, largely abstract “drawings” for the past five years in auctions and group shows. Janet Farber, director of the Phillip Schrager Collection of Contemporary Art, refers to him as a “stealth artist,” not unlike Steve Roberts, Joy and the late Kent Bellows who worked steadily but seldom exhibited in this region.

After working under the radar, Tegland has now officially surfaced with his first solo show currently on view until May 6 at RNG Gallery in Council Bluffs. Appropriately subtitled “Selected Works 2007-2011,” 29 to be exact, suffice it to say that this is one of the best exhibits to date in the calendar year. With some exception this is an enjoyable, well-curated and displayed exhibit that invites and encourages multiple, sustained viewings, always a sign of the best work.

Not only because of the quantity of work here but because of its complexity. Tegland, a graduate of UNO’s Fine Arts Department and currently the Chief Preparator at the Joslyn Art Museum, refers to his art as “rich, textural graphite drawings via intricate pencil work on matte black panels.” As to content, RNG owner Rob Gilmer says in the show’s statement that the work references such varied sources as “Celtic runes, Maori tattoos…and Hopi pottery.”

In an interview prior to his show’s opening, Tegland explained that the connection and influence was largely one of design adding Maria black-on-black pottery to the mix. The imagery, a mix of obscure and familiar figures embedded or flowing in a web of geometric patterns is largely his own. Though he appreciates his own Norse and Germanic mythic past as well as those of other native peoples, his influences are more in the present, closer to home, or should we say, work.

Tegland’s experience as preparator has been profound because it has allowed him to do what many viewers wish they could do he said and that is, “touch the art. I’ve spent time intimately. Handling work allows me to know it uniquely, the process, the marks, the strokes. Sometimes, you even see the fingerprints of the artist.”

The up-close investigative approach his art demands of the viewer, Tegland says, he acquired from his own fascination with several pieces in the Joslyn collection, no two alike.

“I was first drawn to the watercolors in the amazing Bodmer collection,” Tegland said. “The closer you get the more intricate detail is revealed.” But his fascination wasn’t limited to 2D works alone. Two sculptures, “Story-Telling Hut” by Patrick Dougherty and Martin Puryear’s “Self” made an impression as well; the former, an interactive stickwork of twigs and saplings and the latter, a hollow, smooth-grained wooden sculpture that resembles a whale’s head.

Tegland’s attraction to surface detail and intricate design is readily apparent here, but also quite obvious are his choice of palette and each work’s ability to alter tone under natural and artificial light from a matte to a metallic finish. He attributes his preference for black to “a desire to explore a darker side of myself.” And the changing tonal quality is his wish for his viewer to move around each piece as it if were sculpture. After painting previously in more colorful encaustic, the artist hopes his work will have a more meditative and atmospheric effect on the viewer.

The first impression this exhibit makes is one of stark, urban sophistication that when seen from a distance makes the individual pieces seem like part of the gallery’s architecture. It’s a nice effect, but each drawing is ready for its “close-up,” in its own space and spotlight. Kudos especially to the accordion treatment of the portable walls on the left that honors each work, fig. 6-9. Not so the clutter that hampers figs. 11-15 on the gallery’s east wall. Also somewhat disconcerting are the blonde wood “frames” on pieces 24, 19 and 20. Why enclose or place a barrier around something that raises consciousness and stretches the imagination?

Which is why, perhaps, Tegland’s most effective works here are those pieces that not only share his signature, meticulous attention to his craft but do so in asymmetrical design and balance. His more formal compositions feature such visual motifs as “anchors” in “Solid Ground” and “Fram” as well as faces/masks in “Expert,” “Altered Course” and “Roland.” These are pleasing also as it is only natural that viewers attempt to find or “figure out” meaning and connections in abstract art. It’s the cloud factor at play.

But clouds are seldom at rest and so are Tegland’s most intriguing pieces especially when enhanced by informal composition which challenge and keep the eye and mind moving around the panel. As for interpretation, Tegland says “I want to engage, not to lead. Let the viewer create their own experience or engagement.”

Which they must do in order to appreciate two of the most visually interesting, though quite different works in the exhibit, “Cindy Lee” and the crowd-pleasing (it always seemed to have a group in front of it) “Lady of the Canyon.” Though both titles suggest female figures, neither do. What they do have in common is Tegland’s characteristic aesthetic of repetitious, geometric shapes etched or flowing on a background of impossibly meticulous patterns and cross-hatchings. In microcosm they may resemble feathers or scales but in macro they might remind one of extra-terrestrial crop circles or an archaic runescape.

Yet while “Cindy Lee” is a visually expansive and minimalist mindscape that transcends mere decoration, “Lady of the Canyon” is more focused as it features another Tegland motif: birds. To be exact, a raven, which varies in symbolism from the Celtic oracle, Morrigan, to a more “trickster” or transformative identity in Native American lore.

Either interpretation seems to work, particularly as the raven has been a key figure in the metamorphosis in Tegland’s painting style which has brought him to this point in his career. A scenario best seen in the show’s most complex work, the stunning diptych, “Thought and Memory,” a conceptual cryptogram of ravens appearing at top in “Thought” and evaporating below in “Memory” in a fog or web of iconography.

Considered something of a recluse in the local art landscape, you know, the man behind the scenes, Tegland has made an auspicious solo entry onto a diverse metro art scene. In a school yet to be determined, this unassuming scholar has made high marks.