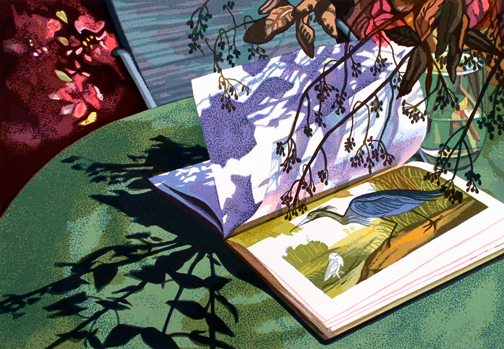 Fine Art printmaking refers to the process of generating an original image with a particular printing technique such as lithography, etching, relief, or screen printing. Vinton Street’s Gallery 72 is presently exhibiting a wide selection of screen prints printed by Master Printer Norm Stewart of Stewart and Stewart Fine Art Prints based in Bloomfield Hills, Michigan.

“There is a lot of thematic diversity in the show,” Norm Stewart said of this exhibit appropriately titled, Stewart and Stewart Impressions. ”There is at least one piece from each artist we have printed for in the last 33 years.  With 50 framed pieces on the gallery walls, and 70 additional prints in the back, there are a lot of prints to see.”

The four prints on view by the painterly realist Janet Fish beautifully exemplify a Master Printer’s command of technical craftsmanship. Stewart’s translation of Fish’s bravura watercolor technique into screen prints of this caliber is thrilling to see. He collaborates with each artist he prints for.

It is a step-by-step layering process.  Each transparent color printed exponentially builds the full palette of the finished image. The light, energy, and saturated color of Fish’s original watercolors maintain a satisfying equivalent in Stewart’s rigorously printed editions.

Sondra Freckelton’s dynamic compositions offer an alternative handling of watercolor technique to that of Janet Fish. It is edifying to compare and contrast Norm Stewart’s prints of these two accomplished still-life painters. Both use the same subject, yet each communicates a distinct worldview. The work of Jane Goldman fits into this category with her popular Audubon Series. Goldman’s adept handling of shape and space can be seen in “Ellen’s Window”, a particularly beautiful composition.

Yvonne Jacquette, known for her aerial views of cities and towns, presents a point of view that is oblique and low to the ground. Jacquette began considering the landscape from above in 1969. Her view on a long distance flight inspired what has become her signature creative exploration. She began doing nocturnal paintings in the late 1970’s, exploring the effects of light and reflections in dark surroundings.

Depictions of the city of New York began as a favorite theme in the 1980’s. “Night View Wing I”, 1992 and “Night View Wing III-H”, 2008 present the same scene, each with a different palette and technical print handling. The first is a traditional silkscreen print. The second is a monoprint, indicating the hand application of additional marks and color by the artist after the screen print was printed. Seeing these two prints side by side is an opportunity to appreciate Jacquette’s process more fully.

Chicago based artist John Himmelfarb, widely appreciated in the Omaha arts community, has been creating prints with Stewart and Stewart since 1991. It’s gratifying to see Himmelfarb’s 10-year stylistic development from his singular “Yellow Rose”, 1992 to the ideogram compositions of “Theory”, and “Practice”, both from 2001. While the Art Brut expressionism of Jean Dubuffet has been an influence on his work, the prints from 2001 provide deeper insight into Himmelfarb’s humor, and poking fun at the art world’s tendency to take itself too seriously.

Neo-Expressionist Hunt Slonem has been working with Norm Stewart almost 20 years, creating brightly colored prints inspired by his own aviary. Slonem’s fascination with exotic wildlife began as a child growing up in Hawaii. The NYC based artist’s travels to India continue to inspire the symbolically spiritual aspect of birds and butterflies in his images.

“Lunas on Blue”, 2001 illustrates butterflies floating in an evanescent blue, heightening a sensation of floating movement. In contrast, the monoprint “Lunas Study-C”, 2012 becomes a collection of butterfly portraits, each butterfly emphasized by individual color and scale. The one not to miss is “Shiva-E”, 2012, a beautifully transcendent image incorporating butterflies into a field that may be simultaneously referencing water and sky, sun and moon.

Australian artist Richard Bosman’s “Deep Forest I” and “Deep Forest II”, each from 2012, are variations of the same composition.  The dramatic contrast between the two, in emotional resonance, places each image in the context of a “before and after” scenario. NYC based Bosman’s evocations of the human condition have never been characterized as pretty. His neo-expressionism packs its own punch with his compelling ability to command a sense of dread.

Painter and printmaker Steven Sorman’s lyrically moving “Only When” and “When Only”, both from 2001, are symmetrical compositions partially based on abstractions of keyholes and ribcages. The visually complex compositions complement one another, each creating a unique sense of movement and stillness.

Among other featured artists are Jack Beal, Susan Crile, Martha Diamond, Keiko Hara, Jonathan Santlofer, Paul Stewart, and Richard Treaster. Gallery 72 continues its tradition of bringing exciting artwork from nationally known artists to the Metro area. This exhibition, continuing through August 17, is one not to miss.