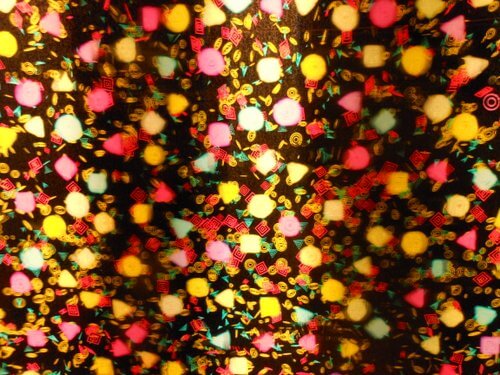 Midwest Arts Midtown has curated an intriguing show with varying points of view. Cool Abstraction features two artists with very different mediums, Gary Day and Michael Tegland.  Day uses his computer animation skills and Tegland uses graphite renderings on panel to deconstruct our idea of abstraction.  Although these two artists use contrasting styles – seeing the juxtaposition of these works may induce the viewers to make connections that can otherwise be unnoticed within a different context.

Digital art is made using a tool that most of us consider an analogy for the human mind.  The “painted” objects that digital artists fabricate convey creative work, which must be decoded and transformed by some physical means in order for it to be seen or touched.

That is what Day does with his digital work, which makes us think and experience technology in a whole new way. He uses both traditional and modern technologies to bring his artwork to life.  His 3D images bring a new perspective to his work and allow the viewer to experience art, which brings depth and movement to an otherwise flat surface.

“I became interested in neuroscience after attending a presentation on memory by Joseph LeDoux at the Rubin Institute in New York a few years ago,” Day said. “What is being developed concerning vision, perception and neuroscience in the last few years is essentially changing the basic concepts that artist work with.”

Day’s pieces are reminiscent of an abstract expressionist painting, which favors abstraction over the replication of subject matter.  His colors in his pieces can range from bright and vivid to more muted and calm.  Day’s work pushes the envelope with technologies, but still manages to maintain an aspect of fine art.

He not only works with 3D images, but also with digital imagery which he manipulates using color and geometric designs.  “The prints in this show are all made with the same software that we use to make computer games and animations,” Day explained.  “I use three dimensional modeling programs to construct all the parts as virtual objects.  The scenes are then lit and rendered to produce the images for printing.”

“Floaters II” is a 3D image of bright colors bursting off the piece.  Day’s use of color is so vibrant that the graphic forms have a hypnotic effect on the viewer.  It draws you into the piece and the viewer will want to look at it at various angels.  “I try to work directly with a viewer’s perception and make objects that will engage people either visually or with computer games, visually, tactilely, and audibly.”

“Helix” is different from “Floaters II” in both color and medium, but it is none-the less interesting.  The simple color palette lends to the complexity of the piece.  This is not a 3D piece, but there is so much movement to it and the viewers can see the images within the piece.  “I am more interested in phenomenology that communication.  My interests tend to be more with aesthetics than politics or social commentary,” the artist added.

Graphite is made from carbon.  And like carbon, graphite is not particularly rare.  It has been used by artists in one form or another for centuries.  But, Michael Tegland uses graphite in a unique way that explores ancient cultures and takes a different approach to his work and art.

Tegland’s tone on tone graphite renderings makes the viewer study the images in his pieces.  “My work is graphite drawing on black chalkboard paint, there’s not a lot of flash,” he said. “It’s not something that will pull the viewer from across the room.  However, if you walk over and engage the piece I hope that it will engage the viewer for as long as they would like to participate.  There’s no one place to start or stop.”

Tegland is relatively new to the art scene but has been producing art for years.  He is a graduate of UNO’s Fine Arts Department and worked as the Chief Preparator at the Joslyn Art Museum for twenty nine years.  Tegland’s tone on tone renderings have intricate and graphic designs and can transform from matte to a metallic finish depending on the light source which can be ethereal when viewed.

“I’ve doodled in this manner since I was twelve.  After working as a painter for over forty years, I was finding less satisfaction with the work and the process.  About six years ago I just decided to get out of the way so to speak and followed my hand.”

“ABCD” is a tetraptych of four canvases put together to form a large scale piece.  Tegland’s art makes you look for hidden meanings within his work.  “ABCD” can also be broken up from one single piece, but it is much stronger as one big piece allowing the viewer to see more of a story.  There seems to be a Miro influence, but with a void of color.  The graphic designs can be so hidden unless you are really looking at the piece.

“Reveal” has a more tribal feel.  The look of ancient tattoos borders the top of the piece which is circular comprised with geometric designs.  The lines flow through and intersect the piece and in the center is an egg shaped figure also comprised of fluid intersecting lines.

In this show we have two very different ways of expressing what abstraction is and how to express it.  The contrast is not that simple – new ways of using digital programming versus the old way of expressing art by using simple graphite.  Each are revisited and revised along the way.  But, the act of creating art remains integral to the artists and the pieces they produce.