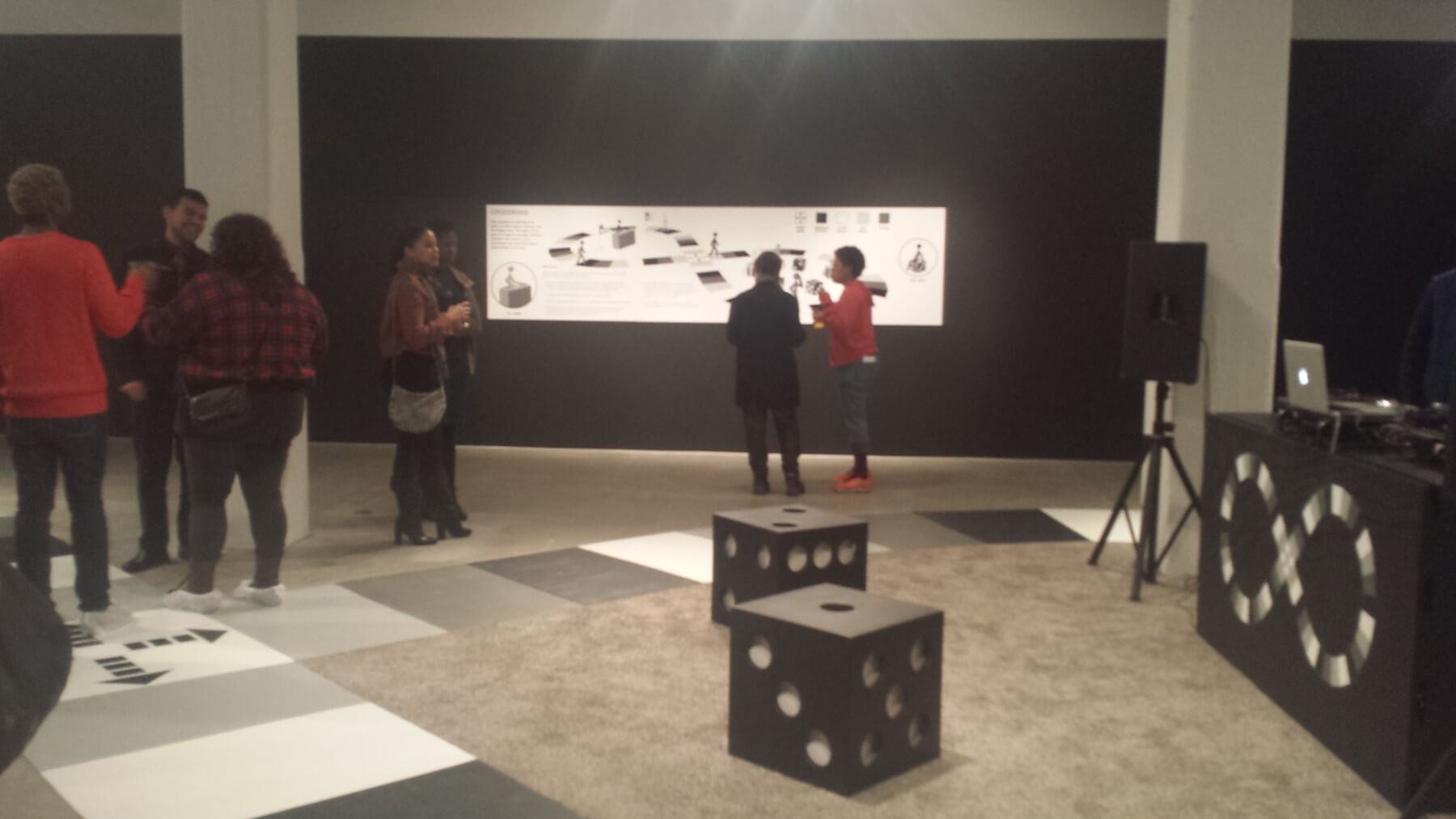 Art is the communication of what a society thinks, experiences and feels. In our history we’ve had everything from religious figures to Campbell’s soup cans become iconography that explain our time and place.

It’s no accident that our collective memories have been shaped by images over time-whether painted and hung on a wall or sent by satellite onto a TV set. The image explains our thoughts more than words often can.

Two of the newest exhibitions at the Bemis Center for Contemporary Arts, Everyday Static Transmissions and Crossroad: A Social Sculpture, translate that power of media messaging into the familiar tools of our collective memory and look closely at the risk of losing those memories.

New York-based multi-disciplinary artist Derrick Adams opened Crossroad: A Social Sculpture, the third iteration of an ever-changing radio station. In this version a DJ booth is attached to a life-sized game board, calling for a musical chairs-like experience. When the music stops, the DJ questions the players with historical facts and their ability to answer determines how far they go.

The familiar setup of a game show appeals to memories growing up while watching Family Feud or Hollywood Squares. In these situations, cultural barriers give way and success is dependent solely on what you know-or, more accurately, what you remember.

Educational formats have been a big influence on Adams. Much of his performance work was inspired by shows like Sesame Street-where the ability to simplify and be accessed by so many-contributed to what seems like a new language.

This short hand of iconography presented to us through television allows us a special ability to characterize each other (Archie Bunker), empathize (9/11) and dream (Who Wants to be a Millionaire?).

The radio station–itself a fixture in our modern collective music memory–will be available to local talent during the exhibit. Through its web page -crossroadradio.tumblr.com- guest DJs are welcome to broadcast their own show on Thursdays & Saturdays.

As we have come to believe that media-whether music, television, or otherwise-is such a staple in our collective memory, we also get this feeling that we are, in turn, a part of it. We immerse into these worlds and see reflections of ourselves. Adams allows us to be part of this nostalgic world we love and become part of the iconography.

While Adams draws from artifacts that have been not only preserved but broadcast and available enough to dip into on occasion, Benjamin Tiven-currently in Berlin-focuses on the act of recorded image being erased. Everyday Static Transmissions follows Tiven’s research with the Kenya Broadcasting Corporation (KBC) and the discovery of their video archives.

In contrast to the zealous listing and scrutiny we give to our programs in the United States, the KBC had piles of un-labeled videos that appeared to have no hierarchy or importance.

What is interesting about Tiven’s documentation of these archives is that the Kenyan government forbade recording of their recordings-a scrupulous concern not reflected in their daily practice of cataloging. Perhaps the strategy of losing their inventory was their best method of hiding it.

What is held in even higher esteem is the tape itself: a valuable medium to record-even if not to keep. Calling it an amnesiac medium, Tiven illustrates through a short film and photographs the regard for the potential that a recording has.

With each recording-from nature footage to the speech of a president-there is a hope for a moment that is magic and unrepeatable. When it fails to show itself, it goes on the chopping block.

What they have decided is that our own collective memory of an event should be sufficient and the log the archives keeps of what is erased and record serves as a “paper-matter record of things you could only imagine.”

It becomes folklore of sorts, not completely unlike the folklore our American television media passes down through our family sitcoms, white Bronco chases and moon landings, creating iconography for us constantly.

The difference is whether how we recall it through collective memory vs the evidence kept safe. Derrick Adams refers to ‘image construction’ as a method for how we learn and process the images we see.

We often learn about the images that are passed down to us but it is also important to learn about what is left out, whether it is how our history books are written or by what a society decides to keep and present.