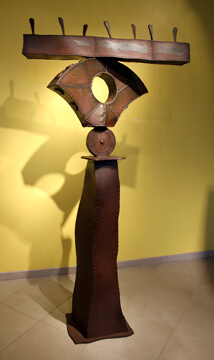 The Sunderland, St. Cecilia Cathedral’s Arts Project Gallery, is currently featuring an exhibition of new work by sculptor Paul Konchagulian.  MEN at WORK (and Play) thoughtfully constructs a balance between the sacred and profane in this exhibition of steel sculpture on view through January 12, 2014.

“I really love what steel does,” Konchagulian said at his opening, “how malleable and flexible it can be. Glenn Zweygardt, my sculpture teacher at Alfred University was an inspiration to keep making work, not get too fussy, and maintain a rhythm of production. He taught us skills and how to physically make something. He believed art couldn’t be taught, that it was the result of each individual’s particular sensibility.”

Konchagulian’s sensibility informs his signature weld of skillful fabrication with good humor. “My welds are never ground,” he said. “I stitch the piece three inches at a time, welding the top and then the bottom to allow the bead to cool.”

With a dynamically closed form, the corners, curves, and angles of the piece, “Wiser Than That Now” communicates wisdom through the balance and distribution of parts to the whole. Walk around the piece to explore details; stand back from the piece to take in a unified sense of curiosity regarding the human condition.

“Steel Will” is intriguing with its dominant circular shape held between two longer “arms.” With each “arm” placed on two pedestals of the same height, it’s hard to tell if the piece was originally intended to be displayed this way, or if this was a curatorial decision by the gallery to get the piece off the floor. If placed on the ground, the diagonal thrust of the two arms held by the circular center might create more visual tension. As seen here “Steel Will” appears to be resting.

Perceived beauty in art is often a matter of viewer interpretation. Konchagulian’s point of view is not didactic. He doesn’t seem interested in telling the viewer how to think or what to feel, as much as he does in sharing the possibilities inherent to either. ‘“Trust Yourself” is my version of rigid,’ he said, implying it may not be everyone’s.

“The Da-da movement, Miro, and Tinguely have all been influences,” Konchagulian said. Nowhere is this more apparent than in the kinetic steel forms on display. Each requires pushing or pulling by hand in order to see parts move or hear turning wheels clank. The head and hand in “Blah Blah Blah” appears animated, even though a still object placed on a pedestal.

“Pick Me” has two hand shapes that move up and down as the box they’re poking out of is moved. “Self Poor-trait” humorously refers to the artist on the move. The figurative references are comically intended to entertain with most of the fun being poked at the artist himself. “Tim Burton meets Dr. Seuss,” Konchagulian laughed. German artist A.R.Penck meets cartoonist R. Crumb seems more like it. Even with all these references, the archetypal symbolism Konchagulian is creating is uniquely his own, utilizing his characteristic method for handling steel.

In addition to welded steel forms, the exhibition includes a series of found tools repurposed for expressive expediency. Recovering from open-heart surgery, Konchagulian found the metal parts of shovels and saws convenient for cutting shapes while simultaneously referencing the tool’s utilitarian aspect.

The positive-negative interplay of shape and space enhances the ambivalence and complexity of each object. ”You Choose” indicates a choice between violence and faith, while “One Will Kill You” offers medicine or faith as two alternatives. The proportion of handle shape and cut metal is uniquely effective in “Good and Evil” and “For the Love of God and Guns.”

While these tools can no longer be used as utilitarian objects, their forms as presented here indicate conscious decision-making is hard work indeed. The concise shape interplay of “All In” efficiently balances simplicity with complexity. “Three Generations” is a saw worth seeing. The handles on either end playfully balance the elongated shapes between,

More of Konchagulian’s sculpture can be seen throughout Omaha. Public Art Omaha at www.publicartomaha.org lists the artists and locations for all public art projects. “aha-MO” is comprised of three main forms fabricated with welded steel plate. Two large hands form seats with a profiled head between the two chairs. The setting and location are intended to welcome people and invite them to take a seat. The Gene Leahey Mall on the North side of the lagoon between 10th and 13th Street is where “aha-MO” is located.

Sunderland Gallery’s MEN at WORK (and Play) is another invitation for experiencing the vision of Paul Konchagulian, one of Omaha’s talented sculptors in mid-career.