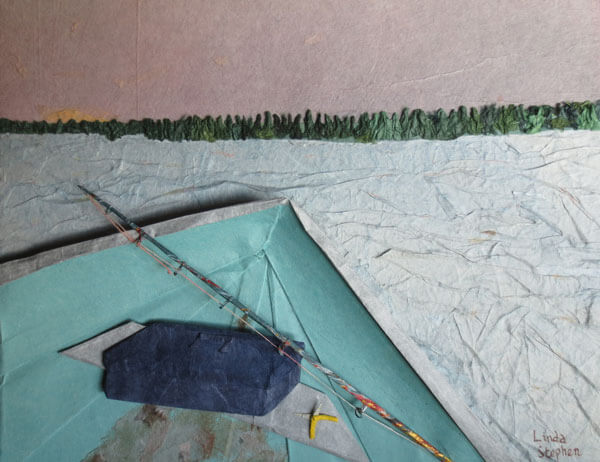 Great Lakes to Great Plains, the current exhibit at the Fred Simon Gallery, features collage landscapes by Linda Stephen and ceramic sculpture from Iggy Sumnik. Though working in different mediums, both artists celebrate the flora, fauna and Midwest signage of the region, if in diametrically opposed approaches.  Stephen uses carefully assembled origami collage scenes of the Midwest, while Sumnik offers humorous clay images of animals and comments on the urban environment.

What they both share is a high level of craftsmanship in their divergent pursuits. And accessibility; this is “comfort food” for the average viewer to enjoy.  Visitors can be confident that all of the work shown is well-wrought and impeccably crafted, giving us the ease of simply enjoying individual offerings.

Stephen’s work in the current show has a decidedly Midwest feel, with scenes familiar to all of us—big skies, corn stalks, sand hill cranes and boats on water.  A recent Homestead Residency in Beatrice, teaching origami paper folding, is the site of several pieces in the exhibit.  One can certainly imagine works like this being used to illustrate children’s books.

“Fishing Time,” shown above, is arguably Stephen’s best composition in the show.  The strong diagonals and simpler presentation of the boat’s frontal position adds a power that her other images seemed too small to exhibit.  It might remind one of Mary Cassatt’s famous “The Boating Party,” (albeit missing the boaters here).  The quieter colors and finely suggested fishing equipment in the boat suggest that we slow down, and notice the fine detail in this particular work.   Also enjoyable are the straightforward and more graphic images of sailing boats…no fussiness here.

Collage has been around in various cultures for a long time: 1,500 years in Japan, and in England going back to 1772, with Mary Delaney’s cut paper flowers in England.  (An excellent book on Delany’s collages can be found in Paper Garden, by Molly Peacock- 2010).

Stephen has lived in Nebraska since 2005, after growing up in the Great Lakes area of Michigan.  She graduated with a B.A. in music and French, and an M.A. in Journalism.  She then spent seven years working in public relations in Japan. It was there that Stephen began using Japanese origami papers to create compositions. She has been working with origami collages for ten years, along with a day job with a publishing company and caring for her family.

Ceramic artist Iggy Sumnik came to Omaha from Detroit, Michigan to assist Jun Kaneko from 2008-2010.  This sojourn allowed him to master clay techniques that propelled him into his current personal oeuvre.

Sumnik kept the organic shapes, geometric patterning and skill he had practiced to move on to create his own personal “Fantasia.”  The elegant and sure shaping of the clay continues, yet Sumnik has moved on with the added layer of projecting the theme which shows in all of his work in the last several years: that of awareness of man’s tendency to bend nature to human goals.  He adds social consciousness, giving the viewer more to consider when viewing his work.

“Sun Moon Dog,” seems an example of what happens to animals with the hand of a human involved.  The texture fur might add is removed, replaced by slick and shiny glaze.  Each foot has prominent toes, adding stability perhaps, but also a cartooned feeling.  The “NO slash” on the flat face assures that we get the point…This is not a dog, but a cartoon posing as one….and with no mouth or eyes, how can this lovely animal communicate?  Perhaps just a joke, but…

The “Pipemingo” seems to be Nature subverted again.  Perhaps some might rationalize that the welded rebar legs are offered simply as a stability choice, but given this artist’s stated goal of demonstrating the “human tendency to impact the natural world,” it would seem much more.  The sewer pipe-like head on this bird is lovingly finished to look like a realistic plumber’s pipe. Sumnik’s “Yellow Icon Arrow”, is replete with images of flying planes, a jumping deer warning and no smoking sign on the shape of what also could be the shape of a home…where we live—surrounded by commerce. Even at home we can’t really escape the signage modern life thrusts at us.

Sumnik earned a BFA in Art from Wayne State University in Michigan.  After a stint at Youthville in Detroit and sojourn with Kaneko, he works with community youth in and maintains a studio in Omaha.  He is represented by Modern Arts Midtown Gallery on Dodge Street.

Great Lakes to Great Plains continues until Feb. 6, at the Fred Simon Gallery of the Nebraska Arts Council, 1004 Farnam St. For details as to gallery hours and more, go to artscouncil.nebraska.gov.