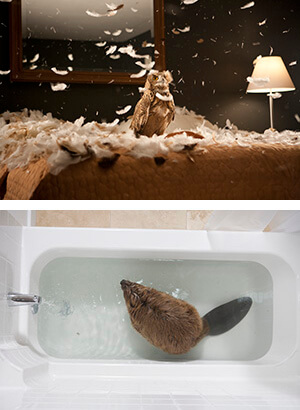 Doug Aitken’s migration (empire), 2008, is focused on the idea of what happens when human and animal worlds collide. In the video the artist places animals in a paradox by exposing them to the human world. The video was shot in motel rooms. The animals were removed from their natural habitat and brought into this human environment. This twenty-four minute video comprised of surrealist vignettes begin to reveal each animal’s instincts. Animal behavior is comprised from these instincts, it is what makes them who they are. Just to name a few of the instances in the movie, Joslyn has given a few previews in their description of this exhibit: a beaver finds his way to the running water in the bathtub; an unruly bison sends furniture toppling over with its massive head; a cougar tears into pillows and rabbits frolic. migration (empire) is an epilogue to Joslyn’s Go West! exhibition. Ideas of Westward expansion and the impact humans have had on the landscape and animals inhabiting it. It is also said to reflect on notions of what signifies the American West. Aitken explains: “It’s almost like a survey of the landscape. . . It’s a cinematic portrayal of an idea that’s somewhat fictional, futuristic, yet set within our current reality.”