Home » Art » Literary » More IN Than OUT 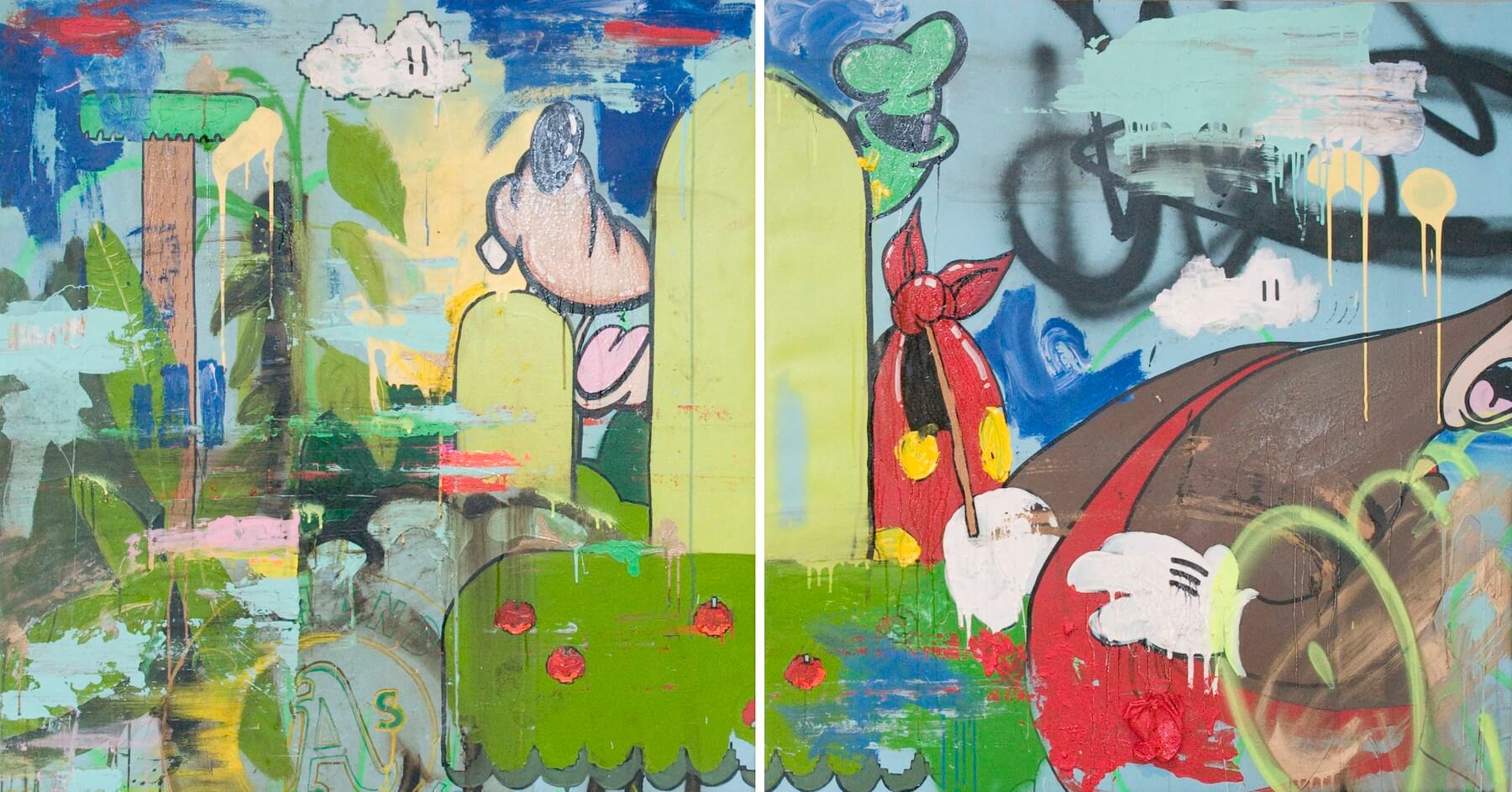 Featuring sixteen artists, Modern Arts Midtown presents Pop Meets Street, which is as far-reaching as the title implies (but is it reaching too far?).

This large group exhibition extends many of the tropes we associate with both pop and street art: bright colors, spray paints, irony, a touch of whimsy, excessive banality, ready-mades, everyday objects, and satire.

However, pop and street art do not solely dictate this exhibition. The exhibition also explores the dichotomies of insider/outsider artwork; think of a rumble between the Greasers and the Socs in S.E. Hinton’s book The Outsiders.

Immediately entering the gallery one encounters a series of paintings by Des Moines based artist Jordan Weber. Including everything from Homer Simpson to the Glade logo, these works are a bombardment of imagery and color.

Together or individually, Weber’s collages best articulate the theme of “Pop” meeting “Street” where everyday objects/themes are amplified by stenciled and spray painted surfaces. Layered together, a less than superficial dialogue emerges. What do Homer and Glade have to do with each other? It is this borderline between humor and seriousness that allows Weber to emerge as a champion in the exhibition.

To the left of Weber’s cacophonous surfaces is another exploration of layered imagery. Sioux City’s Paul Chelstad has several works in the exhibition comprised of digitally collaged images printed and stretched on a “canvas” that appears to be made by a print-on-demand service.

Is this contemporary pop art making? All from his series “New York Times Diaries,” his works combine drawings and graphic imagery from the New York Times. Other artwork in the exhibition, such as Brent Witters’ “India Street Posters” take a similar stab by taking a photo of a photo of a photo with equally cool results. Ahem, Richard Prince’s Instagram grabs anyone?

Moments of irony also emerge in the gallery’s many spaces. Omaha’s Iggy Sumnik has many ceramic birds migrating throughout the gallery. While some pop up seemingly randomly, there is one particular bird of interest. This bird is sitting atop a surveillance camera, also made by Sumnik, titled “Bird on a Camera.” It appears to be watching the “street art” and possibly protecting the graffiti from actually happening on the walls of the gallery.

Also being watched is Jamie Burmeister’s stacked totem of lampshades conveniently titled “Shades.” Appearing to be purchased straight from the showroom floor of Nebraska Furniture Mart, these everyday objects cascade from the ceiling and confront, at least for me, the visceral side of “West O luxury”.

Scattered within the gallery are the drastically minimal, yet saccharine Popsicle paintings by Ben Pratt. Pratt works with everyday object of food and reduces it to a mere transparent shape. This Popsicle is now a formal study in shape, color and transparency. Unlike Wayne Thiebaud, the sugary treat is no longer mouth watering but rather a cold and cute form.

One of the more interesting inclusions in the exhibition is Lynn Piper. Piper is a painter from Omaha whose paintings come off as something produced during vacation bible school, yet with a sincerity lacking in most of the other works.

Her work is set in the tone of naiveté, yet is far from it. Paintings such as “Thinking about not giving the waitress any tables” is a spooky and grotesque painting of a woman with two black eyes standing with open arms welcoming the viewer into a crowded restaurant.

Perspectives are skewed, proportions are nonexistent and yet the waitress’s chilling glazed stare confronts an alternative stance to the other more haptic and superficial inclusions in the exhibition. These paintings are dark and confrontational in ways in which others are glossy and fun.

Even her still lifes take a sinister and uncharmed stance. However, I am not sure where this work fits in on the Tinder date of Pop and Street. Should Piper’s work have been swiped left or right?

The notion of “outsider” artists/artwork or work that “defies a category” is confusing in the context of Pop meeting Street. The tribalism of a-band-of-misfit-toys is an odd way to describe an exhibition that is set within two very distinct and relatively easy to define typologies of art making.

Through closer inspection, there are still a few artists (and works) who do not fit within this context of “not fitting in.” Wendy Jane Bantam and Troy Muller are outsiders to this outsider group. Do the insiders of the outsiders group now become insiders? Also, with a theme as broad as pop and street and outsider, what else then could have been included?

Well, namely, more women artists. This exhibition’s scope and theme is far reaching, yet the real outsiders are women artists, of which only two are represented here. Is this lack of women artists the pièce de résistance in an exhibition whose tertiary theme is inclusivity?

I can’t help but remember the book The Outsiders when thinking about Pop Meets Street. There are so many artists and so much work included in the gang of outsiders. Maybe Ponyboy had it right when he said, “Maybe the two different worlds we lived in weren’t so different. We saw the same sunset.”

Pop Meets Street is on view at Modern Arts Midtown, located at 3615 Dodge St in Omaha, through July 31. For more information visit modernartsmidtown.com.