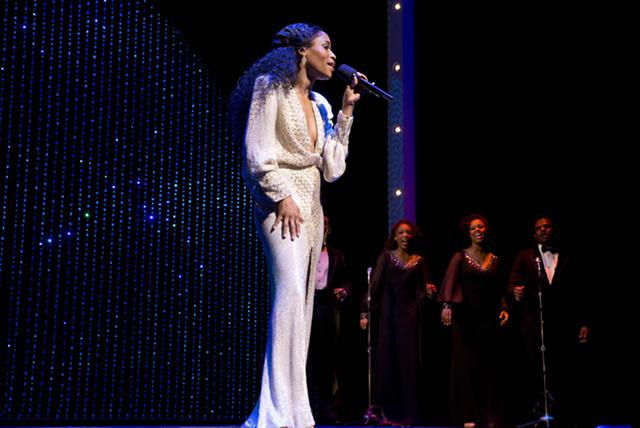 Motown the Musical invites the unlikeliest of comparisons to August: Osage County. The former is a sure-fire mix of hit songs, dance and visual fireworks at the Orpheum Theater through Sunday, the latter a dark comedy of family dysfunction that ran three years ago at the Omaha Community Playhouse.

They share long playing time that flashes by swiftly thanks to non-stop, rapid-fire excitement. And both are so full of ingredients that create that enthusiasm that they don’t make it easy to sum up in a review.

But it helps to know that this writer isn’t the target audience for a show about Berry Gordy’s Motown success with the likes of Diana Ross, Smokey Robinson, Marvin Gaye, Stevie Wonder and the Jackson Five. Maybe a half dozen of the 50-plus songs were familiar to me, and I didn’t recall groups such as The Contours.

Others in the opening crowd seemed to know most of the music after only a few notes from the pit or the vocalists.

Made no difference. I don’t suffer from restless leg syndrome, but my feet were tapping all night long. The Motown sound came backed by a scenic design that started with simple white vertical and horizontal bars but added projected historical highlights, including the assassinations of John Kennedy and Martin Luther King Jr.

The evening didn’t “wear on,” as Elwood P. Dowd once opined. It rushed by, often with the audience clapping along to everything from “My Girl” to “Dancing in the Street” and “Ain’t No Mountain High Enough.” They cheered vocalists ranging from young Reed Shannon as Michael Jackson, Jarran Muse as Marvin Gaye and Jesse Nager as Smokey Robinson to leads who dominated the story line, Clifton Oliver as founder Berry Gordy and Allison Semmes as superstar Ross of the Supremes.

Critics often cite two alleged shortcomings, complaining that too many songs get short stage time and that the book is weak. The latter complaint appears almost every time a lot of music requires a little story.

I’ve just been reading the biography of Omaha native Fred Astaire, who made all those musicals with Ginger Rogers and others. The songs came from the likes of Irving Berlin, the Gershwins and Cole Porter, and the music and dancing always overshadowed shallow stories.

And the critics always end up pointing out the obvious, the fact that Astaire dancing and singing to Irving Berlin outshines the story. In the immortal words of Homer Simpson, “Duh!”

Yeah, we get the point that Gordy created a huge record label triumph, then saw his stars sign contracts with others. We understand that the world was changing and that black artists found a larger audience that included whites, despite the more prevalent racism of the 1960s and ’70s. But the music that bridged some gaps prevailed then and prevails at the Orpheum.

It wasn’t that surprising to walk out onto 16th at the end and find a street troubadour strumming his guitar and singing “My Girl.”