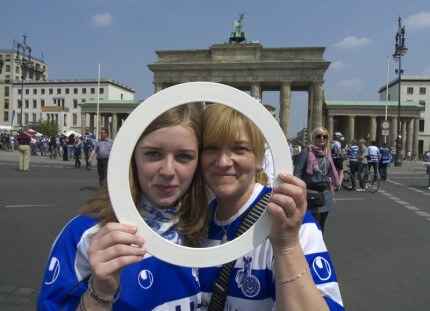 Although portraiture is the most popular form of photography, it seldom is given the status of fine art. The highest compliment the practitioner in this medium will likely ever hear is, “Great job, it looks just like her” or “Wow, he’s never looked better.”

Which is a shame because while the commercial photographer works hard at his craft to do justice and more with what he has to work with, there are some photo artists who interpret face and figure for something more than the sensual and decorative.

Magnum photographers such as Eve Arnold and co-founder Henri Cartier-Bresson captured more than likeness. They revealed character or even a concept in their subject matter that raised their portraiture to a “decisive moment” of fine art.

Two German artists from Berlin but well known to the Omaha community, Gerhard Kassner and Christian Rothmann also approach portrait photography from a more conceptual point of view as seen in their current Moving Gallery exhibit, Portraits, at the Garden of the Zodiac Gallery through Dec. 6.

The exhibit features 40 or so color (Rothmann’s) and black-and-white (Kassner’s) photographs that are immediately recognizable for their genre’s ability to not only express physical individuality but personality and character as well. Realists both, the lenses of Rothmann and Kassner do not lie though their vision and style are quite different.

Yet, additionally these portraits have a context and narrative that is not ordinary while taking full advantage of the medium. Again, it’s what separates the artist from the commercial photographer: the desire to express and please oneself first, viewer second and subject third.

Though occasionally Portraits shares a similar theme of familial relationships and bonds, its tone, POV and aesthetic are quite varied. Kassner photographs members of his family and close friends, some now passed on, therefore his imagery is personal, intimate and ultimately quite touching.

While several portraits would not be out of place in a family album or gallery, the larger works belie this intimacy and closely resemble the sophisticated, grand style he normally reserves for his notable celebrity shots of films stars at the annual Berlinale festival. That he treats close family members in a similar grandiose fashion here successfully illustrates the axiom, “If the headline is big enough, so is the news.”

Curatorially, this larger than life treatment, especially in the case of the portraits of his father and mother in the main room, is not always successful as they tend to overwhelm both space and the viewer and cry out for a bigger sightline. Though evocatively and powerfully staged, the father image hangs in an alcove to the left and is best seen outside the gallery looking in from the hall.  Similarly, the extreme close-up and finely detailed diptych of mother and hands is best appreciated from across the room.

Conversely, Rothmann’s five full-figure, life-size series of mothers and daughters seem very comfortable in that front room. That they share the same space as Kassner’s pieces helps to emphasize the potential portraiture has conceptually. Kassner’s are professionally shot with sophisticated large and medium format cameras, largely in studio or predetermined setting. Rothmann’s are candids taken with a simple digital camera while traveling in three different continents.

Aesthetically, Kassner’s images are formal and pictorial in keeping with a tone that varies from the tender and solemn to the enigmatic and detached. Rothmann’s are a paradox of control and spontaneity, mostly playful and sometimes self-conscious. The former’s multi-tonal black-and-white palette suits their introspective mood as does the colorful, poppy hues fit the near carnival atmosphere of the latter.

The very extroverted Rothmann approached pairs of mothers and daughters in various festivals in China, Europe and the US inviting them to pose for his point-and-shoot. He utilized a white acrobat ring as icebreaker and prop asking each couple to use it as a possible interpretation of their bond. The imaginative use of this ring by mother and daughter as well as body language reveals a wide emotional range and status in their relationships.

For example, on the east wall of the main room, two photos of an East Indian pair sharply contrast their relationship. On the left, mom and daughter with eyes averted off the frame, stand grimly and stiffly three feet apart and hold the ring as if a barrier between them. Either uncomfortable with each other or the photo op, the image resembles a wanted poster or police lineup.

To their right, mother and daughter share more than a symbolic circle. Standing next to each other wearing similar festive and colorful garb and engaging smiles, they do more than tolerate one another. Bearing a strong resemblance and comfortable in each other’s space they could easily pass for sisters in spirit as well as appearance.

Two photos on the south wall dominate with their more playful use of this circular bond. In one, both mother and daughter peer through the prop together as if they “see” things alike. The other depicts a mom who has framed her daughter’s face, possibly saying, “I made her in my image” or “I’m proud of this picture.” Similarly, two photos in the next room use the circle as a halo while bookending the entire midsize series. On the right, daughter holds the “halo” over her mom sitting courtly on her throne in a garden. Quite the reverse on the left is the mother who proudly supports a halo over her model-like daughter much as she has done, no doubt, her offspring all her life.

By contrast are the more nostalgic and pensive portraits of Kassner’s whose bond is established with hands and faces. In that same alcove in the main room, the artist’s grandmother and daughter pause along a path and their body language—grandma listing to her right, youngster straight and tall– and firmly gripped hands speak volumes about unspoken yet deeply felt ties that bind.

Kassner’s two large portraits of his parents are studies in contrast. They both stare hypnotically back at the viewer, he proud and somewhat distant with hands of quiet resolve, she in one frame with a beguiling yet bemused expression and then covering her face with her hands in the second, perhaps overwhelmed by the moment and unwilling to deal with or reveal any more.

A small series of similar face and hand diptychs continues in the hallway to the back room where hang more large family portraits, but it’s three fortuitous family candids that stand out. On the right side of the west wall, a set of grandparents, anxious to please, gather themselves as the grandfather awkwardly adjusts his glasses. In the middle in a last rite of sublime solitude, Kassner freezes in time a moment shared with grandmother at her hospice bedside.

More poignant perhaps is an uncharacteristic long shot of his grandparents embracing during one last visit to their old family home, shot two rooms away, each threshold a transition of time and space over a lifetime together. In all three images, hands hold tight and embrace what they see, know and love of value in their lives.

Portraits: Gerhard Kassner & Christian Rotthman continues through Dec. 6 at the Garden of the Zodiac Gallery in the Old Market Passageway, 1042 Howard St., Tuesdays through Saturdays from noon to 7 p.m.