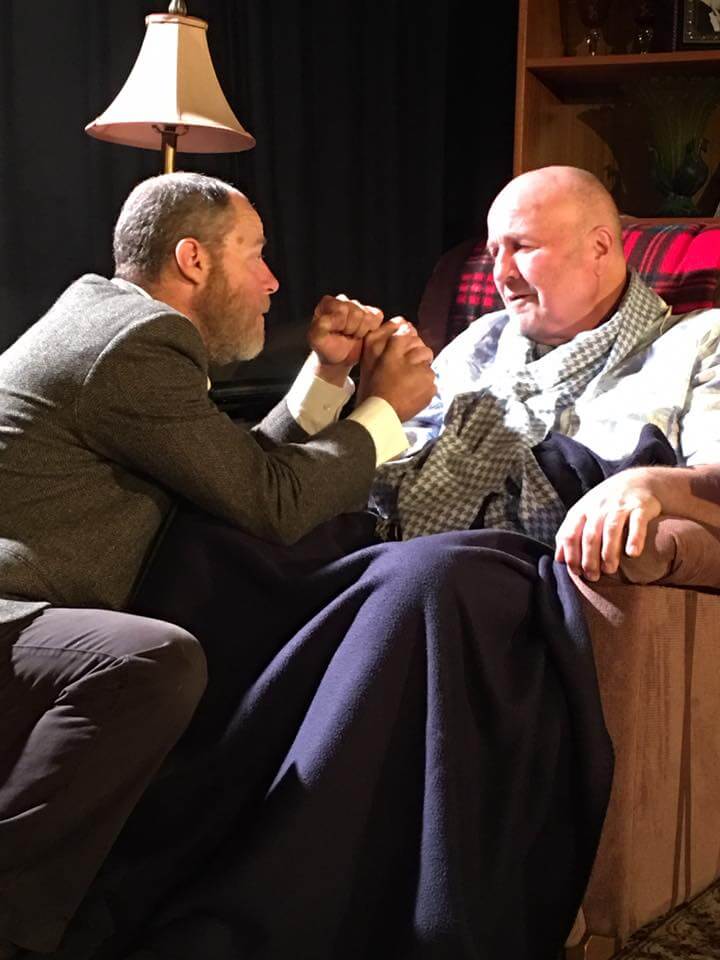 You haven’t much time left to experience two impressively natural and believable performances by actors John Hatcher and Michael Lyon in a fine play about the limitations of time, the finite nature of life. They appear in Jeffrey Hatcher’s adaptation of Mitch Albom’s best-selling memoir Tuesdays with Morrie. This PART offering takes place at The Crossroads, a tellingly symbolic name, given that the story concerns how Mitch and Morrie Schwartz intersect at points in their lives where change impends.

Much of what transpires takes place in Morrie’s home to which he has become confined under the onslaught of ALS, also called Lou Gehrig’s Disease. Morrie’s death hovers in that house. Yet this elegantly simple, sweetly instructive piece does not come across as a place for maudlin and obvious sentimentality.

Sports writer Albom candidly reveals his own frailties, long hidden from himself and from others given his total immersion in a career. He also reveals eventual self-discoveries, becoming close to Morrie, a popular Brandeis University sociology professor who had taught Albom years before and, at this final stage, has something deeper and more profound to teach.

Albom seeks to pass along Morrie’s realizations, as if likewise teaching, about cherishing life so that we, too, can ask ourselves what we are doing with ours, even as, inevitably, we continue aging, getting closer to the last days. Among the questions asked is why we wait to express what love we feel for others, concealing that from them and from ourselves. Thornton Wilder did something movingly similar in “Our Town.”  A consummation devoutly to be wished.

Exploring Mitch’s history, he and Hatcher have the insight and the artistry to show how people can become emotionally buried under the weight of too much ambition and too little clear thinking. When younger Mitch abandoned the urge to become a jazz pianist, something intuitive, in favor of pursuing fame and fortune, he ended up analyzing someone else’s actions. Symbolically, too, this sports writer is bound to connect to Lou Gehrig. Plus, Morrie has things to say about the media, given that his ebbing existence became the focus of TV interviews about him.

Although many such themes suggest dark seriousness, this actually brims with lively humor and charm. L’chaim.

On opening night Michael Lyon’s warm version of Morrie came alive without ever pushing solemn sorrow or overdone jollity.  His suggestions of Morrie’s increasing physical disabilities seemed totally convincing, no doubt reminding us of someone we know going through the same thing. Everything he did made the man and situation feel real, rather than theatrical. However, on opening night, as Morrie became weaker, Lyon, probably attempting verisimilitude, spoke somewhat too softly. That made him less easy to understand. Given the limited acoustics of the playing space and an audience bound to include the no-longer young, it would be better for technique to supersede too much reality.

As Mitch, John Hatcher always stayed believable. He made Mitch’s eventual emotional awakening equally true and sincere. He conveyed much intelligence, suggesting someone more thoughtful than brash, like someone young, still hovering on the edge of maturity. More a son than an adult equal. Certainly not some kind of edgy jock, which might have been more specific and colorful. His and director Gordon Cantiello’s choice of this interpretation leaves him overshadowed.

The 90-minute play is often intermission-less. However, on opening night, an interval of about 30 minutes felt quite long. On the other hand, that could have given couples and groups who came together, a period to come together even more, to ponder and discuss the truths explored on stage.

The excellent and quite informative program notes could serve as a model for other local theatre groups which fail to tell their audiences about the writers. One thing is missing, though, the name of a singer who, off-stage, personifies the voice of Mitch’s wife, even though the song is thoroughly identified.

When the lights go up again and the story comes to a close, audiences leaving the space find themselves in the darkening, now sparsely-inhabited halls of The Crossroads. This proves that there’s life there still.