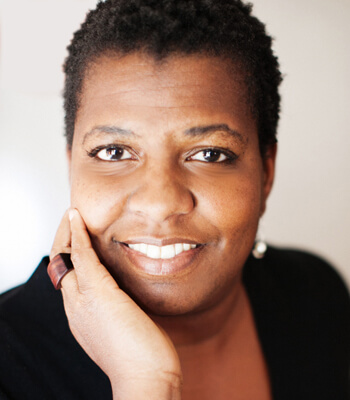 “I’m Wanda Ewing—printmaker, painter, collage and multimedia artist and latch hook maven. I’ve been making provocative art with a political edge in my midwestern hometown since 1999. And to do that, you have to be tenacious as hell.”

At 3 a.m., Dec.8, Ewing let go of her family, friends and career and suddenly passed away following an emergency cancer surgery, much too soon at the age of 43. Ironically, this auspicious chapter of the Metro’s art scene came to a close that morning following a closing of her current show at the RNG Gallery, which she was unable to attend earlier that night, called Little Deaths.

There was nothing “little” about Ewing’s stature either in her art or in person…and certainly not in her passing. Many had their say last week at services, campuses, coffee shops, bistros and arts venues all over the Metro as to just how significant the loss of this larger-than-life person is in their life and what she meant and continues to mean to the local arts community.

Tributes to her character from family, friends and fellow workers such as “An alive, vibrant person,” “A strong, confident woman” and “She was more than a teacher, she was a friend”…. were the norm as they painted a picture of an artist and mentor who influenced so many who came in contact with her.

Others lent a more personal note with comments like, “I have no words (to describe how I feel), I’m just at a loss”, “We are so saddened and still in stunned disbelief” and “She always greeted me with that amazing smile and a big hug,” as an entire arts community struggled to accept Ewing’s tragic death while in the prime of her life and career.

Contributing to the shock of her passing was the artist’s deliberate downplaying of her nearly yearlong battle with cancer and subsequent treatments that resulted in Ewing’s taking a fall semester medical leave as an associate professor in the art department at University of Nebraska at Omaha. Refusing to “go public” with her illness, she even told RNG owner Rob Gilmer, who asked if it should be part of the above show’s publicity, ”Only if it has to do with the art…and it does not.”

In her honor, UNO has established the Wanda Ewing Scholarship Fund. Donations can be sent to the University of Nebraska Foundation on her behalf. RNG is featuring a special memorial of its own into January that showcases Ewing’s work at various stages in the past 15 years. It includes individual pieces–many lent from collectors–from her Bougie, Dresses, Jewelry and Wallflowers prints, her Video Grrrlzzz and the Black as Pitch, Hot as Hell paintings, and her current latch hook tapestries, among others, all of which can be seen at her website, wandaewing.com.

And, just like the artist herself, her art made a strong first impression. There was nothing subtle about either. If they shared a message, it was “Look at me, I’m a proud black woman, and I’m going to be hard to ignore.” Since much of any artist’s work is autobiographical, then the dominant yet vulnerable, ethnic and voluptuous image seen in virtually all of her work was Wanda at her unapologetically, in your face, expressive best.

She knew her imagery to be controversial. On her website she said, “As a viewer you will always be surprised (maybe even shocked) into looking inward and evaluating—then perhaps re-evaluating—your opinions about race, female beauty standards, sexuality and identity.”

Being provocative never stopped her. In fact, this quality often rattled a few cages in Omaha bent on sustaining a traditional art scene and paved the way for other female artists to find their voices.

This was particularly so at the cage-rattling RNG in 2011 with Ewing’s curated group show, Les Femmes Folles, which as this critic wrote then, was “exploratory, revealing and at times self-effacing in its view of what it is to be a woman. It is also occasionally self-indulgent in illustrating both the pleasure and the frustration in living up to society’s as well as one’s own expectations of being female.”

Naughty and nice, the show featured Ewing’s signature brassy, half-naked, ethnic caricatures, and equally revealing work from Leslie Diuguid, Jamie Lamaster, Lauren van Wyke and especially Rebecca Herskovitz whose own sexualized imagery pushed the envelope of identity and pleasure even more, such was the curator’s influence. It was Herskovitz and her “leading ladies” who once again shared center stage with Ewing at RNG before her final bow last Saturday night.

A native Omahan, Ewing earned a Bachelor of Fine Arts Degree at the San Francisco Art Institute in 1997 and a Master of Fine Arts Degree at the University of Iowa in 2002, all in printmaking, her first love as an artist before she moved on to other mediums. In between, she began a short stay at the Bemis Center for Contemporary Arts in 1999 before starting her graduate work.

In 2004 Ewing joined the UNO arts faculty where Department Chair Robert Carlson said she “brought diversity, not just for the obvious reasons but with her art and mindset…she worked hard and embraced challenges whether working with students, serving on a faculty committee or contributing to the overall well-being of the department.”

She served as a studio foundations professor (drawing and basic design), which remained her primary teaching area. She also occasionally taught courses in elementary printmaking, and more recently graphic design. Her major contribution to the curriculum, said friend and departmental colleague Bonnie O’Connell, “was the development of a upper level course on professional practice titled ‘Art/Work’ which guides students near graduation in the development of a unified body of work.

“They then go on to address the subsequent tasks of securing an exhibition site for the work, as well as issues regarding promotion, documentation, and placement into private and public collections. Given its success, the department is considering it as a capstone course for all studio art majors.”

O’Connell said Ewing was “an energetic, animated teacher who encouraged her students to embrace experimentation…her own artistic success served as an inspiration, and students couldn’t help but be influenced by her fearlessness, self confidence, and belief in the personal rewards of a life in art.” But Ewing made it clear that it took due diligence and tenacity, a lesson that former capstone student Ben McQuillan said didn’t come easy.

“Wanda was ‘the shit.’ When I first met her I was somewhat intimidated, mostly based on what some of the other students were saying about her,” said McQuillan, now affiliated with the Petshop Gallery in Benson. ”She was a bit of a hard-ass in critique, and finals, etc. It took me a little while, but it was clear that her toughness was sincere and designed to push us students. So much so that in between classes and studio time there would sometimes be a line out her door or kids piled up in her office for one on one time. She was more than a professor, she was a mentor, life-coach and friend.”

Ewing’s devotion to mentoring extended to her volunteer work at the Kent Bellows Studio committed to connecting high school students to professional artists in after school programming. Former KBS Director Anne Meysenberg said her presence early on as a board member and mentor was “instantaneous.”

“She was the creative voice in the room who could help make sure we understood the needs of budding artists,” Meysenberg said. “She was just Wanda. She snorted when she laughed and she smiled with her eyes, and she was always quick with a great story.  She exposed the students at the studio to so much, and I was fortunate to spend time with her both personally and professionally.”

Despite her success and influence as a mentor and instructor, Ewing considered herself “an artist first, a teacher second,” as she reminded this writer when reviewing her 2007 show at the UNO Fine Arts Gallery, Do’s and Don’ts. It was a matter of pride for her that her work serve as an example, a variation on a theme of “show and tell.”

“Wanda’s greatest contribution was her passion for art making,” said another UNO colleague and artist, Avery Mazor. “As an artist and professor she always asked, ‘what is your art about? She enjoyed the conversation and challenged norms. She brought a unique and visionary point of view. She saw beyond Omaha and brought an international perspective to our department.”

And Ewing brought honor as well, both to UNO and herself, winning several career and teaching awards including a coveted Individual Artist Grant from the Pollock Krasner Foundation (2011), a Nebraska Arts Council Fellowship (2013), Best Visual Artist of 2008 from OEAA and an Artist of the Year recognition in 2006 from the National Council of Negro Women, Inc., among others.

Perhaps because her work and POV are controversial, her art has been shown and collected internationally at Proyecto ACE Center for Visual Arts in Buenos Aires, Tama Art Museum in Tokyo and nationally by the universities of Texas, Purdue and Iowa and locally at the Sheldon Museum of Art, and at several regional and national museums. Her aesthetic pleased as well.

“Her art was full of vibrancy and she was never afraid to take risks,” said local collector Laura Vranes. “My husband (John McIntyre) and I loved her art because of the beautiful way she could capture form and emotion even with a simple dress.” An observation echoed by artist Mazor who “loved Wanda’s fearlessness in the subject matter of her work and her extraordinary sense of composition, line, and color.”

“I especially love Wanda’s humor and her wicked fun with titles,” added artist O’Connell. “It’s hard to top Black as Pitch, Hot is Hell or her exhibition title of Hookin is Hard Work. Her vitality, larger than life spirit, and open embrace of the sensual was clearly translated into her lively depictions of women.”

No more so than in Sheldon’s survey of Ewing’s work in 2007, the marvelous Bougie exhibition that this critic compared favorably in eReview art journal to one of her influences, Ellen Gallagher. Like the latter, I wrote, “Ewing’s images are largely slave to fashion and sensuality. Thematically, they mirror Gallagher’s repetition of retro images that reference the changing tides of Afro-fashion, especially hairstyles. Ewing’s work profits on similar borrowed stereotypes of beauty, fashion, print advertising, even Warhol.”

But she created them with her own brand of Humanism. One that crosses all racial boundaries, as it “reveals her love-hate relationship with glamour and style…duplicitous in her expose, acknowledging, virtually relishing the culpability of the ‘victim’ who searches for her self image in such glamorous role models. It’s her version of the masquerade, poses willingly adapted to conform to social expectations of womanhood.”

Ewing understood her “women,” identified with their struggle to be known and to be accepted. She didn’t judge them, though she could be at times demanding as well as her own harsh critic. She was both a complicated individual and an open book, or in her case, an exposed canvas.

“Wanda brought it all,” Gilmer said. ”She brought “Flava” to the art scene and honest looks at herself, the canvas was her mirror.” And in it, someone who talked back to the viewer just as openly.

We are missing a strong female voice… a strong contemporary voice… a strong black voice,” Mazor said. “We’ve lost someone who always encourages other artists to seek out their passions and to never be afraid.”

“She was a spirited arts ambassador,” O’Connell added, ”and it will be difficult to find anyone to fill her shoes.”