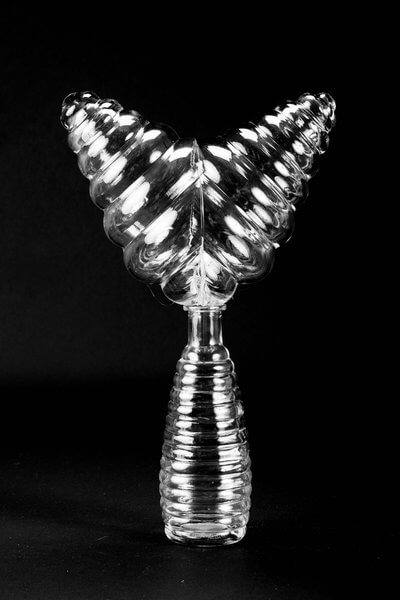 Catherine Ferguson: The Objects of My Attention seems at first like a conversation in which the object being discussed is visible but not seen. The photographs and cast bronzes in this current exhibition at Modern Arts Midtown have a dialogue, but the actual glass objects from which they were distilled are not there.

“The original object of her attention has been dispensed with,” Gallery Director Larry Roots said. “That’s quite eloquent. Now you can start talking about what remains.” The photographs, printed on aluminum, capture the light and transparency of the original glass forms.

This series, mounted on the wall, serve as reference for the cast bronze pieces placed on pedestals. The bronzes duplicate the scale of the original glass forms, while their dark patina opaquely resists reflection. “They’re like giant chess pieces, in which each form belies its origins. They have a surreal quality,” Roots said.

Ferguson describes her process as one of discovery. Found glass objects stacked in different configurations led to photographs of the stacked glass, which in turn suggested casting the forms in bronze.  “I was combining the objects in such a way as to see a new ‘whole’, not looking at them in their original intent but as something new,” Ferguson said. Each series provided an opportunity to see “how different materials can change our response.”

“Glass on Glass l” a large photograph mounted by the gallery’s entrance invites viewers into the gallery. Its reflected form resonates in attitude with the small ink and graphite drawing “Mixing Bowls.” The dialogue between the two images reiterates a theme of reference and cross-reference, echoing throughout the exhibition. The smaller photographic series not only depict reflections, but with their highly polished surfaces become reflective objects themselves.

Conversely the bronzes absorb light articulating varying configurations of whimsical resistance. Each bronze embodies its own idiosyncrasies with references ranging from layer cakes to perfume bottles. “Her Hair” evokes not only hair, but also the work of Lorna Simpson, whose hair motif explores the role of hair as a symbol of social identity. Experienced together the two series succeed in provoking more questions than answers. The wire cage pedestals, capped by canvas covered tops, can be read as arcane forms themselves. All of this juxtaposed together enhances the surreal nature of the featured objects.

Ferguson’s wire wall sculptures serve as counterpoint in the conversation. The “Stella” torso with its lively interlacing of line and knots keeps the eye moving. The increased density of wire around the hips and ankle abstract the form to a visually satisfying equation. Two other variations of Ferguson’s torsos come to mind; “Willow Woman” made in 2001 from willow and beeswax, and the steel “Bella” torso of 2007. Both of these in private collections may be seen on the artist’s website. The three torsos speak again to the effect different materials can have.

The title piece, “The Object of My Attention”, a large rectangular wire form utilizing a similar interlacing of line and knots, holds its shape while barely containing an implied kinetic motion. It is here we see Ferguson’s attention directly communicated. The shadows are softly animated with a mesmerizing effect. “I used bailing wire and needle nose pliers,” Ferguson said. “I enjoyed the immediacy of it.” The joy Ferguson derives from combining drawing with sculpting is readily apparent.

“Willy Nilly’s” flat cut shapes stacked in a “willy-nilly” pattern reference objects we all might use every day. Placed beside Dodge Street’s oncoming traffic the sculpture suggests taking time to enjoy what we have can be a welcome reprieve in the frenzy of everyday life. The white silhouetted shapes have a calming effect, while the counter balance of positive and negative shapes is easier to discern in the smaller red version inside the gallery. Another variation of “Willy-Nilly” completed in the spring of 2013 may be seen at the Wal-Mart Plaza at 168th and Harrison in Omaha.

The exhibition presents the dichotomy between art made for public commissions and art made from more of a personal impetus. A collection of Ferguson’s small, more intimate sculptures in the back of the gallery reveal a passion and sensibility not usually depicted in larger public work.

Their scale and presentation provide a private glimpse into her processing of ideas and objects, as well as a deeper appreciation of the costumes and set designs she did for Opera Omaha’s “Aida.” Stop by Modern Arts Midtown and let your vision be captured by the work of this veteran artist in full stride.