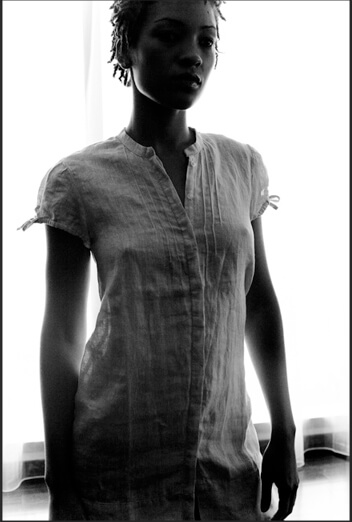 Flyover, Bridges new collaborative venture will be launched at the closing of “One Eye Open” on Monday, June 27, 6:30 – 10:00 pm, NewBLK Gallery, 1213 Jones Street with a live solo performance by Rebecca Lowry of “All Young Girls are Machine Guns.”

Editor’s Note: Tonight’s closing party at the BLK Gallery marks your last chance to explore one of Omaha’s most grassroots and creative photographers and to be on the ground for the launch of his next project. Bryce Bridges is a creative force and one we’re fortunate to call a contributor here.

Commercial portrait photographer Bryce Bridges has worked on projects with a variety of international media companies, including Rolling Stone magazine, Time Warner, and Bloomberg. He recently spent a year in Doha, Qatar as Creative Director for ABODE magazine.  His broad range of experience, including editorial positions and teaching stints comes to play in his exhibition at New BLK.

The show is grouped into five thematic categories. The first, MUSIC, hangs in the main floor gallery presenting single and group commercial portraits.  Bridges’ use of space, place, and light gives each image its unique characteristic.  The duct tape covering the mouth of “Conor Oberst” visually releases his voice to the viewer. His eyes, ear, and throat are revealed as working tools in this carefully crafted composition. “Old Boy Network – Air Farce One” flies high in the clouds in this creative example of narrative interpretation.

”Before I was a photographer I was a musician” writes Bridges in the accompanying statement. “The truth about inspiration is that the entire world of ideas is my playground, and as if I were writing a song, I control the elements that go into my composition and organize them in such a manner that it has emotional and psychological resonance.”

This resonance continues down to the gallery’s basement level with the PORTRAITURE group. “Fundamentally I strive to create a connection between my subject and the viewer. It is through connection that we all begin to understand and learn from one another” Bridges writes. The portrait of artist “Bart Vargas” with garbage can lid as halo, captures the optimistic and positive nature of this active artist recycler. “Too Much Beautiful” is simultaneously portrait and lyrical abstraction. This black and white photograph uses its quality of contrast to full effect. The silhouette, tendrils of hair and sleeve, and undulating curve of a curtain backdrop balance beautifully in this portrait, so aptly titled.

It is in the ABSTRACT LANDSCAPE work Bridges’ one eye opens to the world at large. “I am a student of life by nature,” he writes “and find nothing more enjoyable than the understanding of the world around me- whether it be groups of people, individuals, naturally occurring systems, or the smallest of circumstantial collusions that produce interesting results.”  The window’s reflection “In Plain Sight” juxtaposes a street scene of urban complexity with the simplicity of two hands holding a slip of paper. “Ode to Blue” contains the space within the roof’s edge, while opening to jet streams fading in the twilight. Delicate tree limbs support a filigree of leaves showing the “Forest for the Trees” against a backdrop of skyscrapers. The clarity of each image results from these circumstantial collusions artfully captured.

In talking with Bridges his passion for process becomes more evident. “Editorial portraiture is my main love” he said, “It’s about character for me, and pursuing authenticity. I give each “shoot” forethought, develop the idea, and then don’t think about it until the day of.”

The photo sessions for the PORTRAITS FOR NEBRASKA CHILDREN’S HOME SOCIETY FOUNDATION began with one question, ‘If you could create one new animal by joining any two animals in the world, what animals would you choose and what would you call it?’ “I knew I needed to reveal the complexity of these children” he said, “I got excited about the question. I like to communicate and get to an emotional essence.” The 35 photos from this project hanging in an open grid configuration get the job done. The plain white backdrop emphasizes each child’s body gesture and facial nuance. Hurt, curiosity, vulnerability, courage, and amusement were a few of the emotions registered. “To make people react emotionally. That is the thing” he said. The empathic connection Bridges created with these children is the highlight of the show. The hybrid answer being shown in NEW BLK’s hybrid space doubled the viewing pleasure.

FELINES OF THE MIDDLE EAST rounds out the exhibit. Homeless cats in urban settings are valued for rodent management, and so it is in Qatari. The pathos in this small group of feline “portraits” helps to underscore the humanity of the exhibit at large.

“We get trapped in conventional thinking all too easily” Bridges said, “The next venture FLYOVER is about the cross pollination of ideas.”