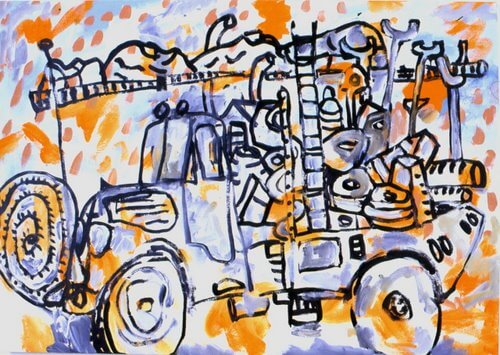 Crystal ball gazing, new year’s resolutions and the Super Bowl. What else occupies the media and the minds of the public in January, 2012? Certainly the Iowa Caucus got its share of attention this week as the political arena opened up to the year’s onslaught of pre-election events awaiting us as we anticipate the real debates between President Obama and his surviving Republican opponent prior to the former’s reelection or removal.

2012 promises to be an interesting and entertaining year, that is if you are a political junkie and have a sense of humor which we can count on the likes of Jon Stewart, Steve Colbert and Bill Maher, among others, to stimulate in order to help us keep it real as well as our sanity. The question remains if the local visual art scene will be as interesting and entertaining…and focused in any way on what matters circa 2012? Focused that is on not only building interest in the arts in general, but on building a broader, inclusive community based upon tolerance and freedom of opportunity and expression in all responsible ways, and in a way that helps bridge the huge social, educational and economic gaps that exist therein.

If you don’t think these are values art in 2012 should be concerned about, maybe it’s because we haven’t seen much of it in Omaha, particularly in 2011. Or maybe art is just a pretty picture hanging on a gallery wall or bronze statue posed in public–recognizable, inoffensive and unassuming. Not that art isn’t all of the above occasionally, but contemporary art can be more demanding as it plays by the rules it makes for itself and exercises its poetic license to challenge the status quo on any subject or issue.

Whether contemporary art in Omaha has the fortitude and vision to explore the unknown and challenge the predetermined remains, as they say, to be seen, but looking ahead at this early date, there are some signs and shows the public can look forward to in 2012. From a variety of venues, they include:

An invitation to help The Union for Contemporary Art clean and paint the interior of its new home site at 2417 Burdette Street, Saturday, Jan, 14, from 10 a.m-3 p.m. Food, beverages and soul music provided.

That same night, Jan. 14, the New BLK Gallery at 1213 Jones St. in the Old Market will host an auction/fundraiser on behalf of Bold Nebraska in its efforts to derail the Keystone Pipeline. This “Stand with Randy” (Organizer Randy Thompson) event will auction off art from area artists as well as baskets filled with meat and produce from local farms and ranches. The UCA and New BLK are two organizations willing to create art opportunities, for a change.

This March the Bemis Center for Contemporary Arts will once again host its juried Regional Exhibition that last year particularly enabled area emerging artists. The competition will be expanded to include a broader range of participants and the resulting exhibit will take place from Mar. 2-April 7. For details go to bemiscenter.org.

The Kaneko will also continue to cater to the creative class in 2012, especially with its on-going series of workshops with creative experts such as Shelley Carson, Jan. 27 and Roger Fransecky, TBA in February. But the venue may draw its biggest crowd hosting Omaha Fashion Week, Mar. 19-24.

There are far too many exhibits scheduled already in 2012 to list here, but among the promising ones at several venues is To Live Forever at the Joslyn Art Museum which opens Feb. 11 and continues until June 3. Consisting of more than 100 objects from the Brooklyn Museum’s renowned collection of ancient Egyptian art, the exhibit includes some of the greatest masterworks of Egypt’s artistic and cultural heritage. For details go to joslyn.org.

Also highly anticipated is the return of Humberto Chavez and Matthias Harder who will once again curate significant international exhibits for the Moving Gallery in the Old Market. Chavez, a fine artist himself, and the Joint Academic Director of Mexico’s National Center for the Arts will organize a conceptual photography exhibit that opens this Feb. 23. Later in June, Harder, the chief curator of the Helmut Newton Museum in Berlin, will direct a special group photography exposition. His Time, Death & Beauty exhibit was a highlight in 2010 for the Moving Gallery.

The newly opened Modern Arts Midtown will exhibit John Himmelfarb, a nationally known artist from Chicago who is a familiar figure in Omaha, in October. The show will highlight current abstract paintings and sculpture of Himmelfarb’s that reference familiar real world settings and objects.

The downtown Anderson O’Brien Gallery also has a full slate of shows scheduled including another well known Omaha artist, Joseph Broghammer who will open Feb. 17 at AOB. The exhibit will feature another flock of Joe, but the always impressive imagery is now less satirical and more personal and self-aware.

Last, but certainly not least, we can count on provocative artist Tim Guthrie to rattle the cages again with another mixed media installation as he did with 2010’s Extraordinary Rendition in the Bemis Underground. Details haven’t been worked out but expect a show late in 2012 at RNG Gallery or early next year that at least from this artist should raise expectations as well as consciousness for the coming year.