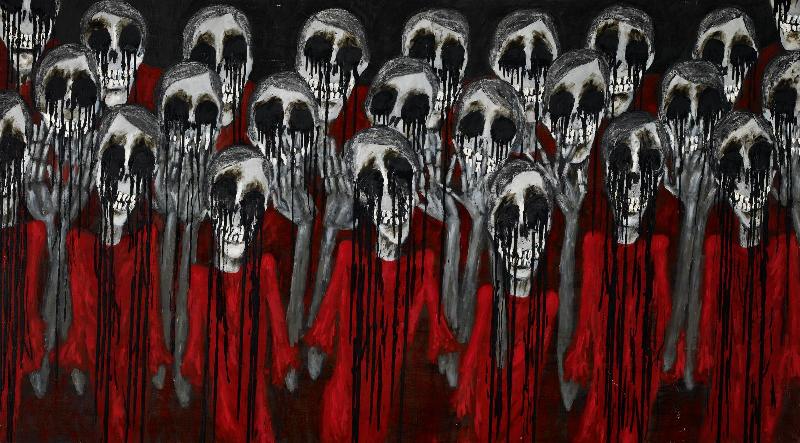 It’s not uncommon for a husband and wife to share an interest and talent in the visual arts. After all, many couples display such in theater, music and literature, let alone in the field of sports.

The Metro is familiar with the work of the former including the sculpture and drawings of Mary Day and the digital prints and computer animation of husband Gary; the painting and drawing of James Freeman and ceramics of wife Susan McGilvrey; and new media art from Jody Boyer and Russ Nordman.

Occasionally, these creative couples will exhibit together, particularly when collaborating in installations such as the ongoing Echotrope project of Boyer and Nordman. Yet even in such curatorial and creative sharing each artist brings something to the show distinctly their own.

This is especially so with the Moving Gallery’s recent offering, a retrospect or survey of the paintings, drawings and sculpture of storied artists Eva Aeppli and Sam Mercer in their self-titled exhibit. So disparate is their work here in style, subject and point-of-view, the viewer may indeed wonder what exactly they have in common.

In no small part, the show pays tribute to these founders of the exhibition space, the Garden of the Zodiac Gallery in the Old Market Passageway. The late Mercer, best known for his preserving and revitalizing this part of Omaha’s downtown prior to its infamous demolition of the city’s Jobber’s Canyon, features his mostly abstract and anthropomorphic watercolors. His wife Eva, an internationally known artist and permanently featured in the Garden courtyard, offers figurative oils, charcoal drawings and silk and bronze heads in more somber tones and visionary imagery.

What, then, does this distinctly two-person exhibit share besides time and space? Certainly that, as this is the first time these two individuals have been shown together, organized as such by son Mark Mercer and his wife, Vera, artist and contemporary of Aeppli who lives in Honfleur, France.

Though both Sam and Eva were part of the avant-garde Paris art scene where they first met, he did not consider himself a professional artist. Nevertheless, his watercolor and gouache paintings have been exhibited in Paris, Brussels, Copenhagen and Basel and presently adorn the new Le Bouillon restaurant in the former French Café site.

Aeppli, on the other hand, was a featured artist in the Nouveau Realist movement that formed in Paris in the ‘50s. Her work is in the collection of the Modern Museet, Stockholm, and the Kunsthaus Zurich and was showcased at the Museum Tinguely in Basel. The cloister at the Garden of the Zodiac was designed in 1985 by Mercer to house the 22 bronze heads of the sculptural suite, “Planets and Signs of the Zodiac.”

But the two-person show shares more than marriage and proximity. In their own way, Aeppli and Mercer are exploring and expressing a certain duality: the duality within mankind and Nature. For the former, the sources or muse appear to be myth and astrology, subjects Aeppli takes very seriously. Mercer on the other hand seems to be motivated by a return to a more innocent and naïve exploration and expression of nature one ordinarily associates with childhood. What their art reveals on closer inspection is that life and death, suffering and joy, and even the forces of good and evil co-exist on all levels.

Aeppli’s devotion to astrology and mythology has been well documented, particularly by critic Jacques Berthon who has analyzed her sculpture and drawings, many of which we see in this exhibit. The viewer can’t be blamed for seeing initially the “macabre” in the “lost souls” of her paintings, the scrap heap of skulls and bony hands and the grotesque figure gingerly handling a scorpion in Aeppli’s imagery.

Nor to react with some misgiving or forbiddance at her “sutured” heads and shrouded, ghostly matron. Death and the supernatural as well as suffering are uncomfortable at best in a civilized world.

But it would be a mistake to ascribe points of history to these works–especially the larger pieces–such as the Holocaust or other forms of genocide and atrocity. Man’s inhumanity is not the human condition imagined in Aeppli’s work.

In his commentary of her art, Berthon connects her vision to lessons of synchronicity learned from a study of astrology and myth’s emphasis on the cycle of life. In the former, the character of man is determined by the position of the planets at one’s birth as well as the interdependence of the objective event and the subjective or psychic state of the observer. This astral connection suggests, in paraphrase, that we are more than just a product of chance or our times.

Aeppli’s mythological figures acknowledge a belief in certain archetypes, particularly the role and journey of the artist as hero or as exemplar. Consequently, her figures whether in 2D or 3D are not “real” but universal. They depict life as a cycle of birth, death and rebirth and the interdependency of opposing forces. The expressions on the faces alone suggest emotional stages that vary from angst to ecstasy, from ennui to acceptance.

Whether one is an artist or not, her imagery argues that “beauty always originates in pain” and that in either case one must suffer for one’s art, for one’s life. Berthon says that an artist’s journey is a cycle of splendor achieved presumably only after a personal struggle or descent into the dark or the unknown.

The hollow and howling men depicted in black and white in the main room of the Zodiac are then, “lost souls” in a purgatory of angst and depression, unable yet to move on. To the right of this compelling work is another grouping of sorts, this time only skulls and boney hands frozen in glee or madness or both. They appear to have undergone some sort of purification, having shed their material existence.

The silk-covered heads—especially the shrouded, glass-encased figure—look like masks or specimens that both hide and reveal the weight and mystery of their journey. Their visage expresses much but says little. Their ethereal and fragile beauty cannot hide the scars (stitches) of their suffering. But they are the survivors who have achieved some state of enlightenment.

In sharp contrast, but with an intriguing duality of its own are Mercer’s fanciful, free-form watercolors. Not only is palette richer and more varied than Aeppli’s, the work’s structure is more gestural and spontaneous than her formalistic aesthetic. Though her figures reference at times the caricatures of filmmaker Tim Burton, Mercer’s more abstract creatures are even more animated with an energy and transparency that threatens to burst from the canvas into thin air.

Mercer’s subject matter resembles the flora and fauna of land, air and sea that have mutated into a sort of cosmic struggle for existence and essence. In spite of their playful and engaging nature there is an edge to his elongated figures, whose tentacles, tendrils, vines, claws and beak ensnare, multiply and reproduce, motivated by the same duplicity in Dylan Thomas’ poem, “The Force That Through the Green Fuse Drives the Flower.”

Like Aeppli’s supernatural studies and specimens, Mercer’s contrasting verdant mise en scene expresses the co-existence of life’s opposing means that measure and define us all, none the least of which are growth and decline, risk and reward, success and failure, in a constant struggle and cycle.

The exhibit of Sam Mercer and Eva Aeppli continues through April 3 at the Garden of the Zodiac Gallery in the Old Market Passageway at 1042 Howard St. For more information call 402.517.8719.