Home » Art » Literary » Past is Prelude 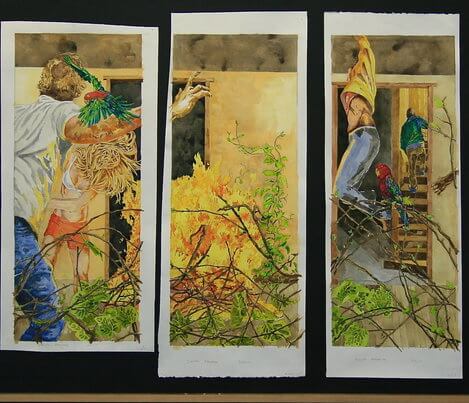 The Metro enjoyed a significant display of fine art last year and further proof is currently on display at Hot Shops Art Center featuring the 2014 OEA visual arts nominees.  Come to this show in January, and you’ll see highly polished, inventive work done by many of this region’s best artists.

More than 20 nominees are in the exhibit as they compete for the spotlight and awards in nine categories given annually by Omaha Entertainment and Arts. Winners in the visual arts, music and theater will announced at the OEA-awards event, Sunday, Feb. 16 at the Doubletree Downtown hotel.

The most impressive techno-savvy sculpture in the visual art exhibit is part of a group effort that showed at RNG Gallery in 2013, conceived and curated by Tim Guthrie, who used 3-D (Maya) software to draw and build his well-wrought sculptural concoctions in “Alternative History.”  This spoof on the pseudo-science prevalent today is amply explained with museum-quality signage—lest we miss the point of the work.

Guthrie had proffered the plan of a second, even larger exhibit in a few years, but has moved on from art, to work on the idea of building prosthetic hands in the area of exercise science.  Perhaps with his ability to think outside the box, he may be eventually hailed as Omaha’s 21st Century Renaissance thinker.

Another group exhibit, which showed originally at Hot Shops, is a send-up on Bruno Bettelheim’s “Uses of Enchantment” theory, which proposes that fairy tales have long been used to help both children and adults cope with their fears. John Miller’s rather surreal figure painting is a marvelous expression of the dark Grimm-like fairy-tale, while Paula Wallace’s painting, “Rabbit” is both endearing and humorous, done in Paula’s classic, personal style.

Stand-out work here in the solo show category includes Jamie Burmeister’s interactive “Chicken Dance”, multiple plastic figures printed from photos of people into a 3-D printer. Initiated by viewer movement, it results in many figures spinning on a moving disc within an old television console, and lit with a strobe light, giving the effect of animating the figures, as music plays.

Duo artists Mike Tegland and Gary Day also seemed a compatible combination from their show at Modern Arts Midtown.  The sheer complexity of both artists’ styles resulted in a well-crafted show. Tegland’s fine, close graphite markings on matte black ask one to move closely, to catch the nuances of his mark-making. Day’s computer prints make for quiet meditative work.

The public art category, new this year, has come in with several variant and highly accomplished projects. Watie White’s display of large acrylic paintings in the windows of a house destined to be demolished in North Omaha was later moved on to Creighton Lied Gallery for a reprise look.

This multiple-piece display is comprises of handsomely rendered figures and scenes that might have happened in the house over the years. This helps the viewer form a story for what seems to be occurring and raises audience participation several notches.

The nearly block-long and beautifully painted wall mural full of fruits and vegetables by Richard Harrison and Mike Giron at Avanza Grocery at Park Avenue and Leavenworth promises years of pleasure for that Midtown neighborhood—more lasting public art in Omaha.

Omaha’s public piano project, 10 pianos spread throughout town, is represented in the award nominations with Les Bruning’s white steel piano.  Bob Bosco’s collaged “yoga” piano can be seen at the Creighton Lied Building, if you missed this too short-lived event last summer.

Overall, this exhibit curated by the visual arts committee chairman, Rob Gilmer and other members, is a delight, prelude perhaps to another year of fine art in the Metro in 2014.