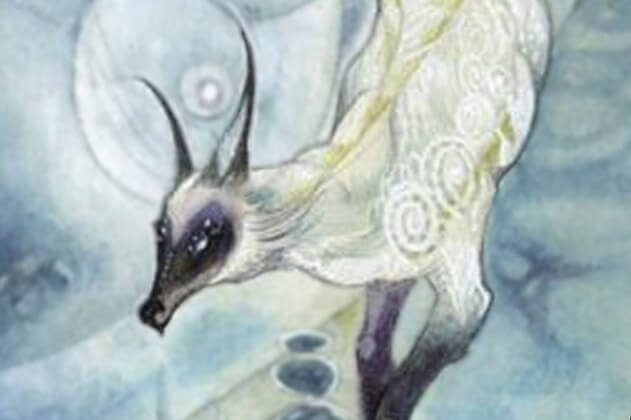 Wandering through alien spaces, you may wonder where you’ll be taken. Be aware that, within one fragment of an evening, seemingly bizarre events materialize. Kimono-clad guides guide you. Look over that shoulder. Slowly. Don’t shatter the spirit, shake the spirit. Mirrors gleam, candles glow, chimes shimmer, voices sing. Wanting to say something.  Perhaps you have to decide what that is. But this is not Halloween, even if the place seems haunted.

This is Kwaidan-Japanese Ghosts and Demons, immersive theatre at UNO. Hai. Folk tales, legends personified. They speak to a world of spirit from a world of spirit embracing traditions. Ah so desu ka– Oh. That’s how it is.

This conception first emerged from the shadows two years ago in Washington, D.C. ,having first taken shape in the mind of Greek and Irish-parented, multi-year resident of U.S. cities, novelist Lafcadio Hearn. At age 40 he immigrated to Japan, named thereafter Koizumi Yakumo. Thirteen years subsequent, he published there a collection of traditional tales in English known as Kwaidan: Stories and Studies of Strange Things, putting put him on a world-wide map of fame. https://en.wikipedia.org/wiki/Lafcadio_Hearn

Evidently Henrich and Ashizawa wish to suggest that this rich tapestry, woven around Japanese souls, now resurrected, comes not from that nation’s past but were conjured up in Hearn’s imagination, as if he witnessed these unusualities himself.

The Washington Post calls this “a reverence for the raw power of story and a sense of mystique and distance (coming) naturally to a scribbler reveling in the culture of a foreign land.” Adding “People who relish surprising and resonant images — will find the hour-long ‘Kwaidan’  worth their time.”

Why now? Ah so. To commemorate the 50th anniversary of a sister city relationship: Omaha to Shizuoka. And to do that during the 10th anniversary of the College of Communication, Fine Arts and Media, at newly formed UNO School of the Arts.

One hour may not seem long. But, with small, incremental elements, centuries might have passed before your eyes and ears to take hold of where you live.

Advisory: It is recommended to not bring personal items such as jackets or purses. However, they can be stored outside the pathway into the experience