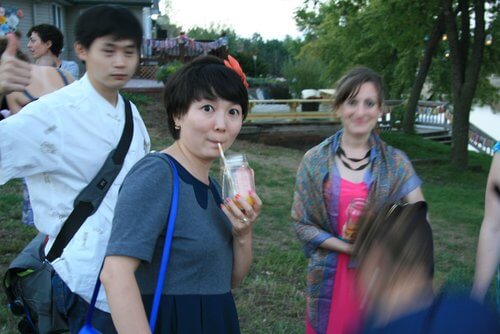 Despite the familiarity of these mostly candids and informal gatherings and portraits, the exhibit effectively conveys major photo artist Diane Arbus’ observation, “A picture is a secret about a secret, the more it tells you the less you know.”

A continual theme to look forward to in Gilmer’s photography is his capturing of friends and family in individual moments of engagement. Gilmer’s images not only evoke similarities between people, but also express the genuine affinity we each may have in how we value one another.

“Sara and Simon” succinctly captures the warmth and joy uniting this couple. Having one in focus and one not accentuates their individuality, as does the different directions of their eye gaze. It is in the compositional framing and repetition of facial features that their joined humanity is conveyed.

Repetition and reflection amplifies the portrait of “Louise.” The sense of inward contemplation is magnified by her arm and hand’s reflection on a shiny surface. The eye gaze moves inward as half her body gesture stretches outward. The contrast of light and dark, along with one hand cut off at the image’s edge, creates a surreal spatial sensation. There are a myriad of ways this photograph could be interpreted.

“That Lesley Look” might be communicating casual boredom or intense interest. Can “Lesley” hear the conversation going on behind her, or is she even aware there are two people conversing behind her? The composition suggests either possibility. A photograph becomes more than a snapshot when the image reveals nuances of perceptual interpretation.

Gilmer’s more successful images are skillfully constructed from this understanding. “Family Reunion” communicates a dynamic of multi-generational worshippers at church. The adults attentive to the service metaphorically “hold” the distracted or sleeping children in an underlying geometric composition providing structure and order. Gilmer’s visual statement surrounding familial love and acceptance translates into a universal image of the larger human family.

Photographer Ansel Adams has said, “A great photograph is one that fully expresses what one feels, in the deepest sense, about what is being photographed.”  Morrissey’s photographs communicate place as well as person in her series using addresses as titles. “22846 River Road #1” includes farm equipment as backdrop for the portrait of a man contained in the scene.

“14388 Lace Lane #1” and “14388 Lace Lane #2” appear to be a demolition site. Is the person photographed here the home’s owner, or has he been hired to oversee the job?  “24660 Liberty Lane” depicts a different individual appearing to consider the tasks before him. Verbally describing some of the images in Morrissey’s series does little to convey the impact; these people are reacting to what appears to be flood damage. These images become a testimony to the resilience of Iowa landowners and tell viewers as much about Morrissey’s empathic response to the scene as they do about natural disaster.

The presentation and framing of Rob Walters’ portraits immediately give his series a level of distinction. While the deadpan quality and angle of view of each image bring the work of William Eggleston to mind, Walters creates his own niche. His lens imbues his subjects with a palpable sense of individual strengths and vulnerabilities.

The straightforward gazes of “Derek” and “Sarah” create relationships in engaging the viewer, while the angle of gazes in “Kim” and “Kelly” allows observation only. Through compositional cropping and full body portraits “Slayer, Omaha NE” and “Girl, Council Bluffs, IA” achieve both, the establishment of relationship and placement of viewer as observer.  This series of photographs is conceptually strong in its ability to create a place for the photographer’s vision, the subject’s humanity, and the viewer’s response.

“A portrait is not a likeness,” Portrait photographer Richard Avedon once said. “The moment an emotion or fact is transformed into a photograph it is no longer a fact but an opinion. There is no such thing as inaccuracy in a photograph. All photographs are accurate. None of them is the truth. ”