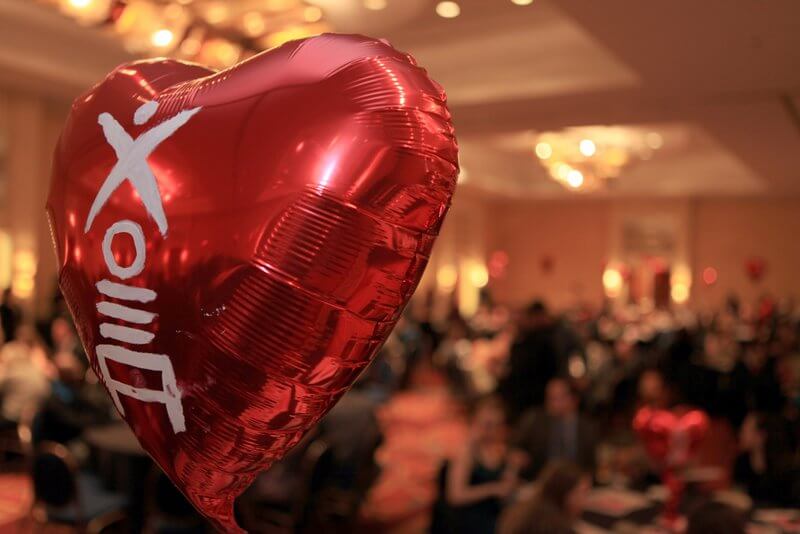 The raucous scream of the Wenatchee Pterodactyl welcomed a Hilton hotel crowd to the 6th annual Omaha Entertainment and Arts Awards, but that’s not unusual when your hosts are slam poets Andrew Ek and Katie F-S.

Actually, Ek was a relatively sedate emcee, while Katie was understandably obsessed with the cry of the pterodactyl given that she’d worked it up for the dinosaur theme of  the upcoming Encyclopedia Show in the 21 & Over series at the Omaha Community Playhouse. Seems a guy in Wenatchee, Washington, blamed the flying reptile for his auto accident.

Hosts help, but the big deal about the OEAA performing arts honors is the glow from recognizing talent, and it’s even better if the winners trot up to the stage and show their appreciation.

But nothing tops actually experiencing the performances that earned the honors and we got that from Kirsten Kluver and Erick Micks. She won Best Actress Musical, one of three awards for the Playhouse Guys and Dolls, and he showed why the Playhouse musical, The 25th Annual Putnam County Spelling Bee, took home four trophies—best musical, director (Carl Beck), supporting actor and actress (Dan Chevalier and Jennifer Tritz).

Wolf whistles greeted Kluver when she sang Adelaide’s Lament, regretting that delayed marriage causes psychosomatic problems. “In other woyds, a poyson could develop a cold.” And those unfamiliar with the barrel-shaped Micks wondered who’d wandered on stage with a shirt half-tucked into his shorts.

Then presenter David Williams introduced him as William Barfee so he could angrily correct the pronunciation to “Bar-fay” before singing “Magic Foot,” describing his spelling method.

Those seven awards to Playhouse musicals were the largest number for any one theater, but the two-stage powerhouse didn’t dominate as fully as in the past.

It felt like the first time that Brigit St. Brigit Theatre got justice when its Irish play, Distant Music, won four awards: outstanding comedy, achievement in scenic design and best actor for Scott Kurz as the nosy bartender, and best supporting actress for Laura Leininger. She could make it two in a row after her recent performance in Tartuffe.

And the only surprise for the Blue Barn’s Three Tall Women, nominated seven times, was that it was limited to two awards, albeit big ones, best actress for Ruth Rath and outstanding drama. That gave director Susan Clement-Toberer the opportunity not only to thank cast, crew and playwright Edward Albee, but to add, “this one’s for you,” naming Pam Carter, who was slated to perform in the play when it was first scheduled before her sudden death.

Jacob Marley’s Christmas Carol raised the Barn’s score to four with directing honors for Kevin Lawler and a supporting actor nod to Scott Working. Another two-award play was My Occasion of Sin at the Shelterbelt, winning for Monica Bauer’s original script and Bailey Newman as best young actor.

Ms. Newman made a classy, fashionable appearance, thanking both the playwright and her director, Roxanne Wach.

An absent nominee could do worse than have Mark Thornburg accept on your behalf. A past honoree himself, Thornburg co-starred in the Bellevue Little Theatre’s Dirty, Rotten Scoundrels with Steve Krambeck, so he stepped up because Krambeck was “home being a dad.”

According to Thornburg, also nominated in this category, Krambeck had neither seen the script or heard the music before winning the role as the klutzy scoundrel opposite Thornburg’s suave scoundrel.

The University of Nebraska at Omaha, the Rose Teens’n Theater, Circle Theater and a fundraiser for the Children’s Respite Care Center shared in the celebration. UNO’s Steven Williams did the lighting design for Dark Play, or Stories for Boys, which lit faces with glowing computer screens. (Exactly what you wish the OEAA audience could see projected when the award was announced.)

The Rose Pride Players Project 13 in support of alternative lifestyles won best performance for a young audience, and Gordon Cantiello’s  production of Smokey Joe’s Café snared Mark Kurtz best musical director. It was no surprise that Amanda Miller’s original compositions netted her the sound design award for The Year of Magical Thinking, but the Circle Theater’s Doug Marr was disappointed that Barb Ross didn’t capture the best acting recognition for her one-woman role in the same play.

Among the outstanding plays that didn’t win awards, Tuesdays with Morrie might be the most surprising. The Playhouse drama received nominations as best dramatic play, best actor for Bill Hutson, best supporting actor for Chris Shonka, and best director for Carl Beck. Honors for any of them would be plausible, but they finished behind deserving recipients.

Ballet Nebraska’s Momentum and the company’s Erika Overturff won best dance and featured dancer, while Matt Mason used his slam poet win to remind the audience that Omaha shines in the slam world.

The warmest moment came when Robin Welch received the Lifetime Achievement Award after a video describing ballet leadership that began here in 1985 as principal ballerina. She later headed the dance component of the Rose and continues to work with young dancers. The moist- eyed recipient said, “This is wonderful” after “such a difficult couple of years.”