Home » Art » Literary » Questions about faith, hope and love. Is there a greatest? 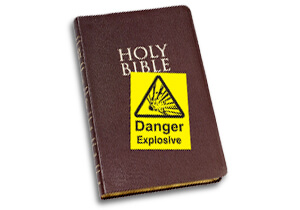 It looks as if there is a new trend in contemporary theatre: dealing with religion. 36 year old Lucas Hnath may be the guiding light behind that. His script The Christians has received a lot of attention as well as praise, getting people to realize that there is something about the subject and the issues worth dramatizing. Hnath says he finds that other playwrights have been prompted to start exploring such ideas.

From Louisville’s Humana Festival in 2014, the words have spread to New York, L.A., London and Edinburgh. And now to Bluebarn Theatre. A “softly mesmerizing drama…(a) terrific play” wrote Christopher Isherwood of the New York Times after last September’s off-Broadway debut. He defines it as being about “the mystery of faith” by “an adventurous thinker in terms of style and content” seeing all sides with “virtually equal clarity and compassion.”

The focus is on a schism in a contemporary evangelical megachurch. From a modest storefront, a congregation of thousands has blossomed and flourished. But pastor Paul sermonizes about a change in beliefs. The foundations seem threatened. Questions are raised about the differences between spirituality and religion. Plus there is tension not only about doctrine but also about debt. This edifice is a major enterprise; with an impressive choir and a following spreading the gospel beyond the walls, could those walls come tumbling down?

Hnath’s concept incorporates direct talk to those who attend, amplified and extended by tangling, cable-trailing microphones, suggesting complexities, probing privacy between God and mortals, asking if such actually exists.

Hnath knows whereof he speaks. He grew up in an evangelical church. His mother was a minister. He went to Christian elementary and middle schools and helped out with youth ministry, also going to seminary classes. What is his point of view?  What are his beliefs? “I can feel that rush to understand when people ask me,” replies Hnath. “I refuse to answer.”

He’s no newcomer to theatre. His A Public Reading of an Unproduced Screenplay About the Death of Walt Disney was produced off-Broadway in 2013 as was Red Speedo. Death Tax was performed at London’s Royal Court Theater that same year. And he’s had other works produced at the Humana Festival. Among his honors: the 2016 Kesselring Prize, a 2015 Whiting Award and a Whitfield Cook Award. “One of the freshest playwriting voices to emerge in the past five years” Isherwood also said.  http://newdramatists.org/lucas-hnath

Sometimes sermons and services seem so theatrical that one could ponder the speaker’s sincerity. Such a question may hover in the aisles. Believe it.