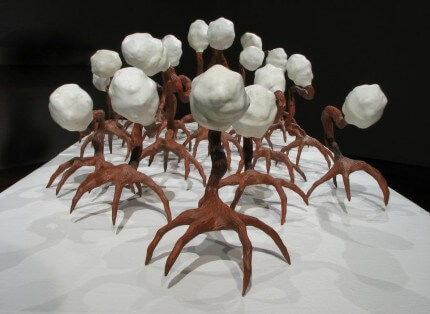 Creighton University’s current exhibit, Resonant Tide, on view at its Lied Art Gallery, welcomes a broad appreciation for creativity through traditional and contemporary perspectives of its faculty and alumnus.

Part celebratory of Creighton’s new president Timothy R. Lannon, S.J. (the first Creighton alumnus to head the University), the exhibit is also a tribute to the creative achievements of the school from inside out. Each invited professor in the show was asked to invite an alumnus of their choice to exhibit alongside them.

“I have witnessed many dramatic experiences of awakening, conversion, and fulfillment in the lives of students who have learned to see and appreciate life through their work as artist,” Photography Professor Michael Flecky, S.J. said.  “These rich experiences bring me back to teaching each semester and cause me to wonder at the miracles that art produces on campus.”

Flecky’s photographs of formal yet organic images of parts of trees, display the effortless elegant beauty of nature.  Contrastingly, his images of abandoned man-made drive-ins throughout New York, areas that became squalor seem to make a perhaps subconscious spiritual message about humanity and nature.

Interestingly, Flecky said, many of the images were selected in response to the figurative work of his former student Allen Norris, compositions that “have a certain resonance with the human body in the formal arrangement of limbs, structure, texture, and energy of biomorphic shapes found in nature.”

Indeed, Norris (BFA 1985), who lives in Spain and runs his own studio, displays an intense affinity for the human form and its capabilities. “Gymnasts 1” features muscular models, a male posed in a push-up with his feet off the floor, holding a female doing the same on his back.  In some of the work abstract bodies morph together, others clearly cut dancers with fabrics. All seem to flaunt how beautiful or warped the human body can be.

Creighton professor Bob Bosco also uses the human form in his mixed media pieces with expressive abstract figures in yoga poses. The twelve paintings are the first of forty illustrations for a forthcoming book on the practice of yoga by author Margaret Hahn.  The geometric forms, breezy paint strokes and organic colors demonstrate Bosco’s passion for the craft, something his former student Halley Gallagher (BFA 2008) instantly seized upon.

“I found my voice and passion for art while attending Creighton,” said Gallagher, who now works as an artist in Montana. “I received encouragement and became close with several faculty members, especially Bob Bosco, who taught me not only the basic principles of art but to trust in seeing the world in my own magnificent way.”

Rich colors, geometric forms and a natural aura are also evident in her paintings of abstract trees which almost read as mosaics with patterned and intentional line quality. Professor Amy Nelson’s abstract porcelain pieces read organically, as well, but are a means to an end, according to the artist who is also the curator of the show.

“I align myself, and my work within the tradition of functional crafts and the concept of being-in-the-world, applying the principle of artistic practice as a vehicle for social and political change,” said Nelson, also a Creighton graduate (BFA 1997).

“21st Century Women’s SuffRage: Vision 2020” is a culmination from six years of her research on the historical impact of reproductive politics, exploring how women view their political power and how their biology affects it.  The almost spider-like brown figures are topped with a white spherical piece, an abstract form based on the ovary and fallopian tube, a visual map of the social and political implications of women’s position in the civic arena.

Nelson’s former student, Joshua Hebbert (BFA 2009) also seeks out challenging concepts through his work, a reason she invited him in the show.

“Joshua pushes the boundaries of knowledge.  His art engages its audience and seeks commonality through unpretentious delivery and limitless accessibility.”

Hebbert’s “In a network of lines that intersect” looks like a science experiment crafted of wood, vinyl tubing, slip-cast porcelain and found objects.  Though it might seem random in the show, the deep concept is intriguing, referencing our understanding of symbols in the environment around us.

Guthrie, a media professor and Creighton graduate (BFA 1989) was invited by Professor John Thien who remembers Guthrie as always being a “master of medium.”

“Tim continues to be driven in his artistic endeavors and I believe he exhibits a breath of vision, talent and concern for society that makes a positive difference,” Thien said.

Thien’s “Day of the Eclipse,” a 2011 oil on canvas, displays his concern for humanity as well, exploring the culture of the American Indian, specifically a vision of a Paiute Indian during an eclipse creating a ghost dance.  Emotionally intense, rich with detail and imagery in animal and human forms, the painting contrasts to the artist’s two bronze heads, also created this year, though the dramatic line quality is evident in his use of clay.

Conversely, Alston’s selected former student, Angie Seykora (BFA 2009) uses felt as her medium with a tall abstract layered form in the middle of the gallery to convey human issues.

“Angie’s sculptures have an unspoken power that relates to the individual in personal and often profound ways,” he said.

Seykora, currently an MFA candidate at Edinboro University of Pennsylvania, counts Alston and the University as foundational for life as a sculptor and the “formal, technical and conceptual training it requires.”

This is the first time Creighton has done a legacy exhibit including former students and their teachers.  It is noteworthy not only for the quality of work but also for the range of perspective, not restricted by a certain religious or otherwise definition of art, but encouraged in the Jesuit tradition to explore creativity.

Resonant Tide is on display at Creighton University Lied Art Gallery, 24th and Cass St., through November 4.  It is free and open to the public daily from 1 to 4p.m.  For more information visit Creighton.edu