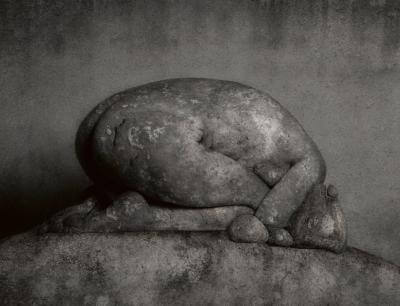 I think its fair to say that over the last couple of years, Modern Arts Midtown, north on Dodge Street from Midtown Crossing, has not only scratched out but unearthed quite a niche for itself in our fair city. MAM’s owner Larry Roots has amassed a sizeable roster of talent, from the mid-career and recognized to the fresh and un-discovered that provides for a full calendar of exciting new work from around the region and the world.

Adding to MAM’s calendar as the summer winds to a close is Italian artist Roberto Kusterle’s third exhibition with the gallery, Stone Marks. This series, as the title suggests, consists of exotic photographs that are in its simplest form, men and women interacting with or “marked” by stone. That is also where this show ceases to be easy.

The photographs themselves might appear to be black and white but they eschew the more familiar, ordinary contrast of that medium. Many of the works are washed in a subdued gray palette—some tinged in copper or bronze–that, when coupled with textures digitally superimposed by the artist, the viewer’s eye wanders holistically. These are the photographs that work best in the exhibition.

All of the work is figurative yet the pieces that stand out most from the group are presented in such a way that the figure is lost within the image and has to be sought out. Pieces like “The Taste of Balance” and “Listening to Balance” present the same subject: a solitary man resting a rock on his lips and against his ear respectively. In both, his head is riddled with long white marks or scars and his skin is weathered to match the texture of his mineral companion, which bares similar markings. It’s as is if to say this man is seeking answers he already knows, or for as much damage he has inflicted he has received an equal amount of punishment in return.

Another sub-group of work from the exhibition that works equally as well are images of figures resting atop the crests of large stones. These photographs nearly lose the figure entirely and allow them to become a part of the larger rock formation as a sort of adornment or ornament. Like the others mentioned above, these can be taken two ways. Each figure either lays or poses atop a large stone and is covered in a texture that is in some way reflected in the rock below, whether it be from the rock leaving an impression on its visitor or the figure impacting its environment.

Not so entirely successful is a series in the group that presents figures wearing stones as highly burdensome jewels around their necks. Though the images do obviously fit within the show’s motif and are striking, they seem to be the ones shouting among a group that has taken more of a vow of silence. The introduction of this new interaction between man and stone pushes too close to fashion and takes one too many steps towards easy which allows this group to stand out in the wrong way.

One other bit of activity in the exhibition worth mention is Root’s addition of works from other artists during a show to supplement, and augment, the entire experience. For Stone Marks, he has chosen to show the works of Fulvio de Pellegrin, Theresa Pfarr, Todd Brown and John Spence, who with their own style and point of view also challenge viewer expectation within a familiar genre. This type of exhibition style, for the best of my knowledge, is not replicated anywhere else in the Metro and provides a refreshing experience.

In a time where things like seasons and the weather are changing very rapidly after having stood immovable, these photographs tell the tale of the marks we leave on the world, the world leaves on us and that we leave on each other.