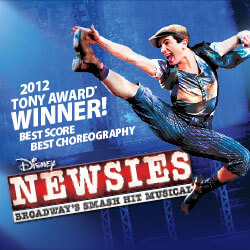 Disney’s Newsies stomps into town landing on its feet on the Orpheum stage for a vigorous albeit brief stay. It’s off and running after a breakneck break-through on Broadway for 29 months, collecting a pair of Tonys and six also-rans.

Despite the youth of many kids in the story, the history-based musical actually isn’t all that young, having been born 24 years ago as a Disney movie. This version spins off from it with songs from the original plus fresh ones. They are by eight-time Oscar- grabbing composer Alan Menken who shared a Tony with lyricist Jack Feldman, Choreographer Christopher Gattelli nabbed a Tony too. The book is by four-time Tony-winning Harvey Fierstein. Quite a team.

The dance-filled zip and flash, billed as a family-friendly show, has “enough raw vitality to command the attention and even stir the blood,” noted the New York Times.

It comes inspired by a newspaper delivery boys’ strike at the turn of the 20th Century. The sometimes orphaned, often homeless lads pooled their energy and strode their way into forcing Joseph Pulitzer and William Randolph Hearst’s newspaper barons to better pay such child workers. Underdogs tugging at the leashes. https://en.wikipedia.org/wiki/Newsboys%27_strike_of_1899

Alan Menken has turned out scores of scores for Disney brand films and stage versions thereof: The Little Mermaid, Beauty and the Beast, Aladdin, and Pocahontas among them. Plus more music for Little Shop of Horrors, The Hunchback of Notre Dame, Hercules, and The Shaggy Dog. Oscar-wise, he’s a major contender, being the second most prolific winner of the award.

Disney has also seen and heard the services of lyricist Feldman,with Oliver & Company, The Lion King II: Simba’s Pride plus.

The newsboys of the story certainly made news. So did this lively version of their struggle and victory.