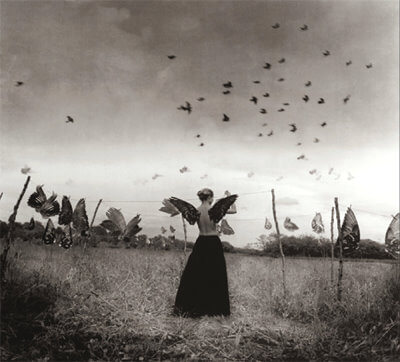 Is it any wonder that viewers approach the exotic photography of Italian artist Roberto Kusterle and ask the inevitable question, “How did he do that?”

Given Kusterle’s own fascination with surreal scenarios and hybrid realities, it’s only natural that one would respond to this illusionist-for that is what the photographer surely is—in this manner.

After all, art and magic depend greatly on a sense of wonder and general curiosity in order to create that sought-after illusion of reality. Yet while magicians or illusionists are reluctant to reveal the secret of their art for obvious reasons, artists seldom avoid discussions of process as a matter of pride.

Kusterle, who lives and works in northeastern Italy, is no exception as he and his curator, Italian photographer Fulvio de Pellegrin, spoke recently at the opening of their current exhibit at the Garden of the Zodiac Gallery in the Old Market Passageway.

The title of each series alone more than hints at the aura of mystery of each image. Without Time and Place is composed of human forms often fused with plant and animal shapes on or in an elaborately impossible background that can only be described as dreamscapes. Some many prefer nightmares. Regardless, they never fail to fascinate and challenge one’s willingness to suspend disbelief.

A Silent Mutation features primarily portraits of women who have become one with their coiffures and headdresses of seeds, pods and other plant life. Though this set is more composed and formal than the above scenarios, the imagery is just as disconcerting as its mixture of makeup, accessories, fashion and hairstyle flies in the face of conventional beauty.

Perhaps even more amazing than the content of each image is the realization that they were created in an elaborate fabricating and staging process that is primarily analog. Only the printing was done digitally. That means what you see in each frame is what Kusterle saw in his viewfinder, created in a complex procedure without the benefit of computer or software special effects per se.

For example, the fish heads surrounding the main fishman in Silent Choir were exactly that, carefully perched on posts underwater in the pond they shared. And the Head and Plant diptych nos. 15 & 16, bear a similar makeup of vegetable matter that complements them in their dual portrait. Kusterle completes these hybrids of animal, vegetable and their surroundings with expressionistic lighting and a sepia tone further enhancing the element of fantasy.

The initial impact of Without Time and Place is theatrical and sculptural for A Silent Mutation, but somehow that doesn’t quite do them justice. Knowing that the content actually existed prior to the photograph gives each image a heightened sense of reality rather than the virtual reality which viewers are conditioned to in popular art via CGI special effects and green screen technology.

It also gives a greater appreciation for Kusterle’s artistry not unlike that given to a magician who creates a piece of fascination before we try to unravel it after being amazed. There is still a “trick” involved, but it was made on a human scale and not in a computer and thus the emotional connection and sense of wonder is stronger.

Overall, Kusterle’s photography provokes “an uncertain harmony” as described by him and de Pellegrin during their lively talk. That is, an uncertain harmony of one with their own body as well as nature and the environment.  For example, there is the figure in From the Roots whose dreadlocks are indeed rooted in the earth. Also, consider the two nude Portraits, nos. 17 and 18 who are quite becoming, becoming, that is, the foliage that adorns their neck and back respectively. Are Kusterle’s subjects merely mutants in a didactic or portentous bit of science fiction as some critics have suggested? Or are these scenarios and portraits the acting out and expression of classical and cultural myths within a modern context? One suspects the latter as neither set of images in the show resemble the latest film version of Body Snatchers or a David Cronenberg mutation morality play.

Consequently, Kusterle challenges not only our perception of reality but reality itself as well as our belief systems and values. His larger narratives in Without Time and Place are particularly evocative as they tend to ritualize our hopes, fears and struggles, physically and psychologically. Invariably, his solitary figures are isolated in or on a surreal land or seascape waiting for or having just arrived at that moment of revelation or transformation.

For some, answers or release never come as with the bent over, burdened figure in Sisyphus who is cursed to bear his troubles and trials to infinity. So to for the dark caped soul in Narcissus who can only bow to the earth and its three reflection pools in search of his own image and identity than look to the heavens. Equally fatalistic is The Poacher who bends to the task of taking from rather than nurturing Mother Earth.

More optimistic are the “fishermen” in Fishing Reserve, Silent Choir and The Lone Fencer who, hybrid or otherwise, stand erect on land or in sea and cast their fate to the powers that be. Perhaps the two images that best exemplify Kusterle’s vision in this series are the polar opposites, the hopeful The Wings of Dreams and the more despairing The Flight of the Waiver.

In the first photo an angelic beauty faces the horizon with wings spread and appears about to follow a flock of birds skyward. Transformation complete. But in the second image, perched on a tree, squats a semi-naked man whose cross to bear is his pair of wings made of branches that hold him both captive and aloft. It’s a striking contrast of two mythical, heroic individuals whose dreams and ambitions are about to be realized in one and forever shackled to the earth in the other.

Fans of the stunning visual deceptions of the photographic duo, ParkeHarrison and the poetic narratives of Omaha photographer Skyelar Hawkins should enjoy Kusterle’s combination of the two styles from a more universal perspective.

Photography of Roberto Kusterle continues through Sept. 14 in The Garden of the Zodiac Gallery in the Old Market Passageway, 1042 Howard St. Tuesdays through Saturdays, 11:30 am to 7:30 pm. For furher information, contact 402.517.8719 or vmercer3@cox.net.