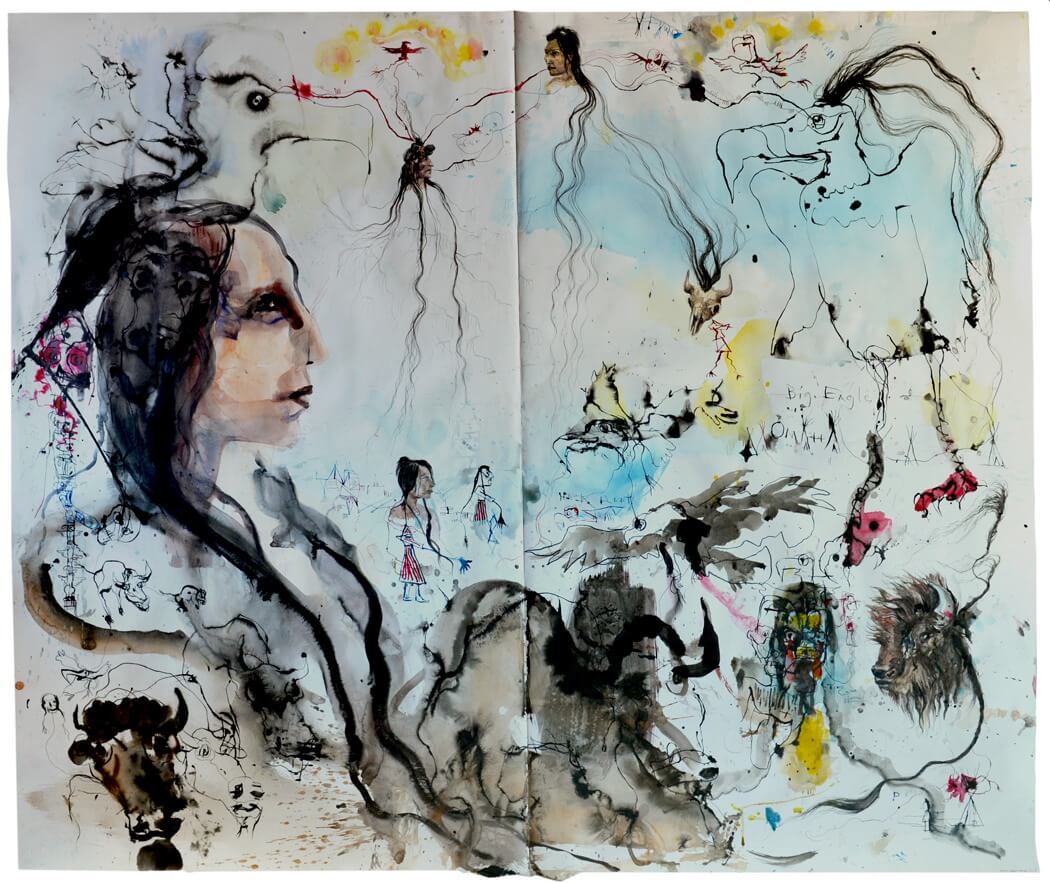 In cyber world, your profile is an array of metadata. It describes you through user names, preferences, posts, tweets, likes and shares. And it is through the public recording of personally meaningful events, photos, and lists that an online persona forms a kind of self-portrait.

Few of us are just one thing—not solely our job, relationships, economic status or religious affiliation. In fact, each of us is a bricolage, as the French would say, a construction of a diverse range of things. And thus our “profiles” change according to the lens through which they are viewed (think Facebook vs LinkedIn).

Brad Kahlhamer is one such bricoleur, whose artwork weds personal experience, cultural history and artistic language. His self-titled show is the current offering in Joslyn Art Museum’s capsule contemporary art gallery, the Riley CAP, a program that has previously featured several artists’ diaristic investigations along themes of fused cultural identity. The exhibition, which opened in November, continues through April 17.

An acknowledged “self-profiler,” the Brooklyn-based Kahlhamer crafts a personal expressionism built from aspects of abstraction, cartooning, commercial design, realism, folk and street style. Added to these aesthetic underpinnings is the artist’s journey of identification, of finding that “third place”, one’s community that is distinct from home and work. For Kahlhamer, that space extends to a “quasi-mythological realm where lived and imagined experiences co-exist,” writes exhibition curator Karin Campbell.

The artist’s motivation stems in part from the many strands of his life’s DNA. A Native American of unknown tribal affiliation, Kahlhamer was raised in the desert southwest by adoptive German-American parents before moving to Wisconsin as a teen. Eventually landing in New York City, he worked for ten years as a design director for Topps, the chewing gum/baseball card maker, and hung out with an array of underground cartoonists, punk rockers and East Village artists.

Aspects of all these sources appear in Kahlhamer’s multimedia artwork. Creating doll-like sculptures from an assortment of found materials, he has made tabletop sculptures that were a collision of Hopi Katsina dancer figures with the hand-wired whimsy of Calder’s “Circus” and the DIY cultural dumpster diving of David Hammons.

His many lively drawings channel a similar multitude of impulses that might be found in the grotesqueries of James Ensor; in the illustrations of outsider Henry Darger; and in the neo-expressionism of Jean-Michel Basquiat. His experiences collaborating with cartoon designers, including [later] graphic novel laureate Art Spiegelman, influenced his approach to complex storytelling.

Of great significance in the imagery and visual structure of Kahlhamer’s self-fictions is his study of historical Plains Indians painting and drawing which provide rare and important pictorial almanacs for societies based largely in oral tradition. For a variety of complicated reasons, such storytelling was adapted in the later part of the 19th century onto pages of ledger or account books, and journals full of colored pencil, ink and watercolor drawings became the newest forms of both lifeways recording and artistic commerce.

Not surprisingly, it was Kahlhamer’s connection to Plains Indian art that attracted Joslyn’s interest, hoping it would extend the dialogue of its current historical Go West! exhibition into contemporary practice. Kahlhamer was invited to spend an extended residency at the Bemis Center, during which time he would explore Joslyn’s collections, travel in the region and produce a new body of work for the show.

Those already schooled in the museum’s holdings know that it owns important works illuminating the history of the trans-Mississippi west, most notably the detailed watercolors of Swiss artist/explorer Karl Bodmer. It also owns an exquisite ledger book by Cheyenne artist Howling Wolf that is regarded among the best of its kind.

In the exhibition, three large drawings in watercolor, ink and pencil on watercolor paper demonstrate just how the Joslyn material blended with Kahlhamer’s personal iconography and aesthetic. Each contains a myriad of images, both large and small, either loosely rendered or highly detailed that appear frequently in his works: heads of Native Americans, bison, birds of prey, totem figures, and skulls as well as text and decorative motifs.

In looking at “Big Eagle/Vignette MMXV (Omaha)”, now added to Joslyn’s permanent collection, it is extremely tempting to unpack quotations of any of the collection material Kahlhamer would have seen during his visit. Bodmer’s echoes are clearest in the realistically rendered portrait heads and detailed animal studies. Titles, with references to tableaus or vignettes, nod to the publication of Bodmer’s post-journey aquatints. Kahlhamer’s choice of format—a composition spread over two pages seamed together—references bound ledger books, as does his line-based style of storytelling by connecting pictographs to suggest a particular set of occurrences or relationships.

But the work remains pure Kahlhamer, who rather describes his image filtering as “open source excavation” and has used this experience to extend his own narratives. The element of the fantastic also resonates in the restless and sometimes macabre delineations of all manner of creatures. Casual scrawls, a bent toward caricature, and washy distribution of color add to the image construction.

Rounding out the exhibition are examples of Kahlhamer’s sculpture. Two flanking paper-wrapped totems stack images reflective of his journey from Ft. Gotham (New York) through Omaha and Council Bluffs, as well as a nod to the carved designs associated with Northwest Coast tribes.

n this way, Kahlhamer’s art maps the musings of his fertile imagination, contextualized by his varied influences and experiences as a curious dweller in a complex world. Their layered expressions serve as a reminder of the slippery process that lies within the core of self-definition.