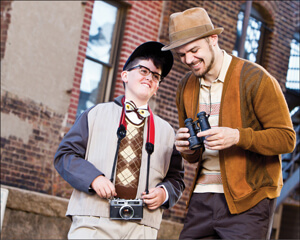 Ben Adams, 12, shows Nick Zadina, who is 12 at heart but plays Ben’s uncle in A Thousand Clowns, the proper placement of his fingers on a ukulele. And it’s quite in character for the youngster to seem more serious than the elder. As director Amy Lane puts it, the nephew is the list-maker, his uncle the laugh-maker. After all, he quit work and looks at life as a comedy populated by the title’s clowns. On the sidelines during rehearsal in the Howard Drew Theatre at the Omaha Community Playhouse, with opening night a week and a few days away, Tim Abou-Nasr, often a lead player, helps Zadina and Adams master the little uke so they can play, “Yes sir, that’s my baby.” If that’s a blast from the past, it’s intentional. “We’re embracing the ’60s,” Lane says, the decade when Herb Gardner’s comedy became a Broadway and film favorite. The play opens with the recorded voice of Chuckles the Chipmunk imploring the kiddies to be good little chipmunkies. “I hate that recording,” Ben mutters in off-stage conversation. “Really?” Nick wonders. “No,” Ben replies. “I’m just trying to stay in character.” Although supported by such seasoned talents as Rob Baker, as born-to-be-a-kid show host named Chuckles, and Randy Vest in his first time back at the Playhouse in years, the heart and soul of the story centers on Zadina as Murray and Adams as his nephew named Nick. Lane sees Murray as a Don Quixote, not trying to save the world so much as his nephew from the tragedy of workaday life. He calls his quitting work “running away to the circus,” and has great fun shouting out the window and laughing it up. Trouble begins when his nephew begins sharing unk’s ideas in school, raising the eyebrows of a social worker (Trish Lilyhorn) and psychologist (David Weisser) who soon snoop on the lad’s upbringing by the fun-loving uncle. Thus Uncle Murray is confronted with a choice: curb his carefree enthusiasm, get a job and rejoin “the nice dead people” or risk losing custody of his nephew. Lane has directed at the University of Nebraska at Omaha (UNO colleague Steve Williams designed her current set), Creighton University and the Playhouse, among other venues, but her primary experience with youngsters has involved raising her own 6-year-old. She worked at the Emmy Gifford, doing shows for kids, but not with them in the cast. So it looked like a new challenge working with 12-year-old Ben. But Ben turned out to be “fantastic,” with a presence that belies his pre-teen years. That may be because he stepped on the Playhouse stage at age 6 as the “boy in the street” in A Christmas Carol. He appeared at that happy moment when a redeemed Scrooge discovers that it’s not too late to make amends, and gives the boy coins to buy the biggest turkey for the Cratchit family. “What,” Ben’s character says to the delight of a giddy Ebenezer, “the one as big as me?” Now a seventh grader, he’s one of several Adams siblings who’ve appeared on stage. His older brother Zach followed him to the Playhouse and brother Eric has a role in a Los Angeles play dealing with the anti-gay marriage action in California. He seems at ease advising the adult Zadina on where to finger the frets. Zadina says, “I dabbled in guitar,” but Adams says he “plays” guitar. Playing the ukulele “is a little different, but I’m catching on.” Abou-Nasr, their coach better known for his lead roles in Playhouse musicals, encouraged Zadina observing, “It might be easier for you. You have longer fingers.” So he strummed a few chords and sang, “Yes sir, that’s my baby, no sir, don’t mean maybe … that’s my baby now-ow.” A Thousand Clowns runs Oct. 22-Nov. 21 in the Howard Drew Theatre at the Omaha Community Playhouse, Thurs.-Sat. 7:30 p.m. and Sun. 2 p.m. Tickets are $35, $21 for students. Call 553.0800 or visit omahaplayhouse.org.