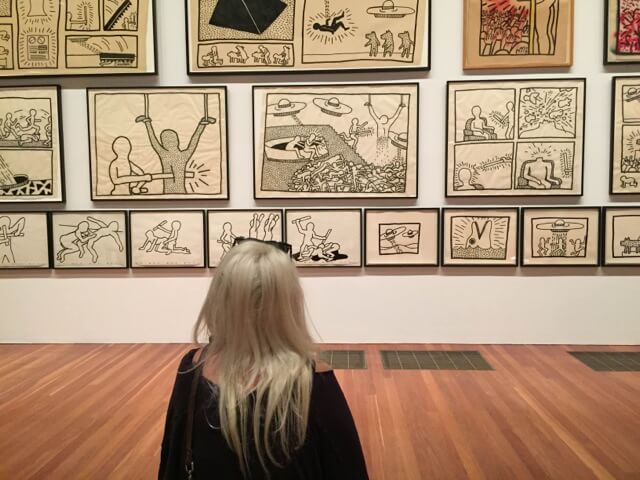 It’s true that artists aren’t exactly “sexperts,” at least not in a scientific or academic manner. Yet neither are they foreign to sex whether they eroticize, satirize or romanticize the subject in the medium of choice.

No matter the approach, in a society increasingly more politically correct, surveilled and censored, we often turn to artists of all kind to express what comes naturally for our own entertainment and edification.

How else to explain audience anticipation and reaction to such extremes of popular and fine art expressions of matters sexual as Fifty Shades of Gray in print and film or the next exhibit of nudes by photographer Robert Mapplethorpe and painter/draftsman Kent Bellows?

That is what art and Eros have in common. They never go out of style or season. The Super Bowl is history, political primaries are waiting their cue. But art and sex share a passion of a different color expressed in shades of red, blue and occasionally, downright purple.

To find out more about what these two creative acts may have in common, Reader asked several area visual artists for their observations. Our “sexperts” not only made the connection, they varied widely on art’s sex appeal. They also describe what they consider to be “sexy” about art and gave favorite examples of work, which can be seen below with additional comments.

One thing all seem to agree with is that art and sex relevancy is a complex issue and a matter of perception. As photographer Rob Gilmer, owner of the more adventurous RNG Gallery on the subject, puts it, as with art, “sex is in the eye of the beholder.”

Another photo artist, Larry Ferguson, whose work includes eroticism, such as the monumental nude image, “Ms. M and Terry Rosenberg,” which is part of the Joslyn Art Museum’s permanent art collection, agrees.

“Is it sexy, is it overtly about sex?,” Ferguson asked. “I believe that depends on who’s looking at it and what they bring to it. I think it’s both, but the viewer can see it any way they want.”

Gilmer’s comment about “passion” or even “sensuality” may be what art and sex have in common according to virtually all those interviewed.

“It is about the passion, the excitement, the emotions and eruptions,” said German artist Christian Rothmann, whose voluptuous paintings of floral abstractions have been a part of the Metro art scene ever since his residency at the Bemis Center.

Metro artist, Christina Narwicz, also known for her floral arrangements, agrees: “What’s more sexual than that? I also think the use of paint can be voluptuous and certainly sexy.”

For Paula Wallace a popular painter and mentor at Hot Shops, the common theme or motif of art and sex is “seduction, a state of heightened senses. It’s [sensuality] a part of our nature or human longing, as a component of storytelling,” a strong element in much of her work.

To that, mixed media artist Kim Reid Kuhn, owner of Benson’s Sweatshop Gallery, adds, “compulsion.” It’s what she says the artist and the viewer have in common.

Former Omaha artist and model Sally Deskins, founder of the Les Femme Folles blog and website, understands this viewer/art connection based on sensuality.

“Have you never met a work of art and were immediately struck with a strong desire to have it, or at least stare for while, get to know it better?”, Deskins asked?

Narwicz voices her reaction to sensual art in more graphic terms: “A group of my friends and I have always said about work, ‘if you can’t beat off to it—it’s not art.’”

Though she may have been speaking metaphorically, it does illustrate the passion between Eros and art. Nevertheless artists also remind us that what is sexy about art isn’t necessarily overt.

“Art that is overtly about sex is rarely sexy,” artist Watie White said, “because art that is sexy is usually about something (else) that is sexy, i.e., power, voyeurism, etc. Art is also very slow in its experience, particularly painting…that leads to a kind of sexy, languid and sensual more often than porn-like.”

“My favorite submission is a piece I made of a nude woman holding a cat, titled ‘Word Association.’ I know, it’s pretty juvenile, but the shows were fun. I still remember the year Fr. Don Doll (renowned photographer and Creighton University professor) showed up in his Roman collar.”

Multimedia and installation artist Tim Guthrie, also connected to Creighton as a Professor of Graphic Design and New Media, has a less playful, more left-brain assessment of what is sexy about art.

“Technology is sexy,” Guthrie said. “Some of the sexiest, crazy awesome art currently being made involves a lot of cutting edge technology, from projection mapping and interaction to 3D printing and robotics. Walking up to a piece that interacts with you and is keenly aware of your presence, when it is well done, that’s sexy to me.”

That may seem a bit calculating and conceptual, given the term under scrutiny here, but consider Gilmer’s even more esoteric response to what’s “sexy” about art.

One Omaha artist that virtually all respondents agreed successfully combined as well as embodied sex and art was the late Wanda Ewing, a nationally recognized mixed media artist and spokesperson for sexual and racial identity.

Deskins, who showed and worked with Ewing in such RNG shows as “Les Femmes Folles” and “Body as Text,” reminds us that their collaboration was a response to “how society reads the female body…since the beginnings of Western ‘art history’…as solely sexual and/or objectified…when a work is really perhaps more about identity, status quo, social justice and several other issues beyond simply sex.”

Though Guthrie feels that some artists use sex “just to get attention,” he agrees Ewing “was an incredible exception. She addressed sex from a non-conventional perspective. She made people re-evaluate what it means to be sexy…and challenged the perception of beauty forced on us in films and magazines.”

The consensus then, at least among artists, is that art and sex were made for each other—and still are—especially when their shared expression isn’t obvious, whether in image or in print.

“It is always lurking,” Reid Kuhn said. “But overt discussion is boring. The allure of both art and sex is in their ambiguity.”