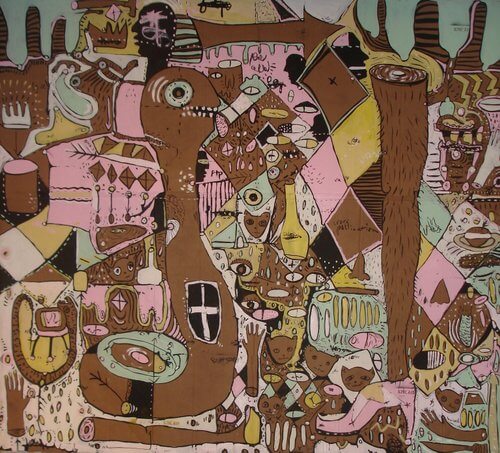 “I don’t like gross things—and a lot of the SHIT SHOW, like the Sweatshop Gallery, is gross–but it’s genius,” Zoe Kuhn, daughter of artist Kim Darling, said of the live performance-exhibit that premiered October 12 at The New BLK Gallery.

Genius, perhaps, certainly a local art revival of sorts, the SHIT SHOW features visual artists Darling, Brion Polonic and Chris Fischer with installations and performance pieces by various other artists all addressing the raw, beastliness of humanity as well as pure adult shenanigans.

Performance artist Caitlin Little worked as curator of the absurd one-night-only happening. The visual art on display ended up as more of a backdrop to the adulterated activities that became the exhibit.

“Herpes Betty” had a kissing booth; Doug Hayko contributed a “shit chandelier” made with his own feces; Erica Coates was a nude who drew the people around her; Sarah Rowe (in gas mask) cut onions and squeezed out the juice in underwear for visitors to drink (and they did); a “lost and found” area had used condoms, cigarette packs, chew cans, empty pill bottles; a pile of underwear left by the “Panty Drop Dance Crew;” a corner of gallery trash; a dildo sculpture by one “Dressor Newton;” random hair pinned around and various random nude postcards and sardonic magazine clippings; Killer Blow played the night, male lead with mouth gagged; random paint by Darling on the walls and a line of “cocaine” (flour) trailing around the room.  Each had their own SHITty intention whether directly (Herpes Betty) or indirectly (Hayko’s chandelier reminisced the familiar setting of elephant-in-the-room meal-time muted conversation).

“There was so much energy, it was like a carnival with people engaged in every corner of the gallery, and that’s what we’re wanting to do,” Darling.  “We (artists) all come from different places, not all in one clique, but we all have this subversive nature to our art and when we collaborate this collective energy ignites this whole experience.”

Experience it was, but too, gallery goers got an inside look at these artists’ minds and processes. As it is, many art ideas culminated from social parties between Darling and her artist friends–drinking, making art and writing crazy SHIT on old typewriters—some of which is in the show.

In fact, all of Fischer’s work shown was made during such events. His female figures use bright spring hues and thick black lines making the simple forms appear brash and rough. The artist, who lives in Omaha, is quite an accomplished exhibiting artist in the Chicago area where he lived for a number of years, but didn’t even attend the opening, ironically adding to the SHITty nature of the show.

Polonic, perhaps best known for his psychedelic work and recent first published book Xanthous Mermaid Mechanics, displayed some psychedelic graphic work, but also some intricate ink drawings reminiscent of Darling’s style. The drawings, like “Golder,” are filled with illustrated objects from bikes to toothbrushes to light bulbs, with stylized patterns, words and phrases, allowing viewers to roam around the bizarre page.

Darling herself was thrilled to be able to paint on cardboard. Her familiar haunting yet comical beasts and patterns take on definite unrefined territory when placed on the rough brown surface of the everyday material. “Burn Out” spans a floor-to-ceiling space in the gallery with the large size Darling excels in, full of biting creatures and wretched symbols viewers get lost in.

Though frequently referred to as “outsider,” these artists’ representation in the Omaha scene, such as at New BLK and various Benson venues, works to overcome that label. Like the Secessionists and Dadaists, they are a subculture of art, thus making them inclusive however off-the-beaten-path and raunchy comparatively they are.

No, SHIT isn’t new. Notoriously raunchy artist Andres Serrano has been at it since the 1980s with his infamous “Piss Christ” (1987) photograph of a plastic crucifix submerged in a glass of his own urine. More recently, a NYC Shit Show exhibit featured his “Self Portrait Shit” series of photographs of his and animal dung in 2008.

But, in a conservative climate like Omaha, SHIT reminds us that we are alive. Although (albeit purposefully) excessive and shocking, the show really simply touches on primitive human bits.

Zoe Kuhn, a senior at Duchesne High School, put it plainly (and literally): “A shit show is inside of everyone.”

Darling is focusing on renovating and planning similarly scandalous shows for the Sweatshop Gallery in Benson. Facebook.com/sweatshopgalleryomaha. Keep up with Kim at kimreidkuhn.com.

The SHIT SHOW residue remains at The New BLK thru Oct. 31. Thenewblk.com.