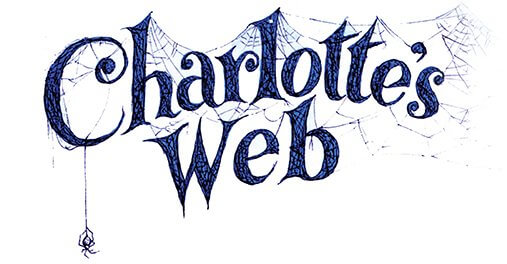 Back in the early 19th Century when Little Miss Muffett abandoned her tuffet, foregoing her curds and whey, few people had ever heard of arachnophobia. And for many decades such creatures were despised and destroyed. Yet ancient Asian cultures cherish them as sacred guardians of homes and hearths. After all, spiders subsist on disease-bearing flies.

In 1952 E.B. White came up with a story for young people about a benign spider, Charlotte, who cherishes the goodness of a pig named Wilbur and weaves a magic web to save him from becoming food for humans. As Charlotte’s life inevitably ebbs, Wilbur protects her newborns who all love him as much as she did.

Perhaps you know this story. Publishers Weekly lists the book as the best-selling children’s paperback of all time. And there are the movies, a video sequel and a video game.

But to see it come to life you could visit The Rose. Only theatre can make it live. Joseph Robinette’s stage version “brims with gentle humor and family values” said Chicago Theatre Review. Robinette, you may recall, wrote the wonderful stage version of A Christmas Story, The Musical which The Rose vivified this past December.

There can be beauty and there can be heartbreak in such a circle of life.