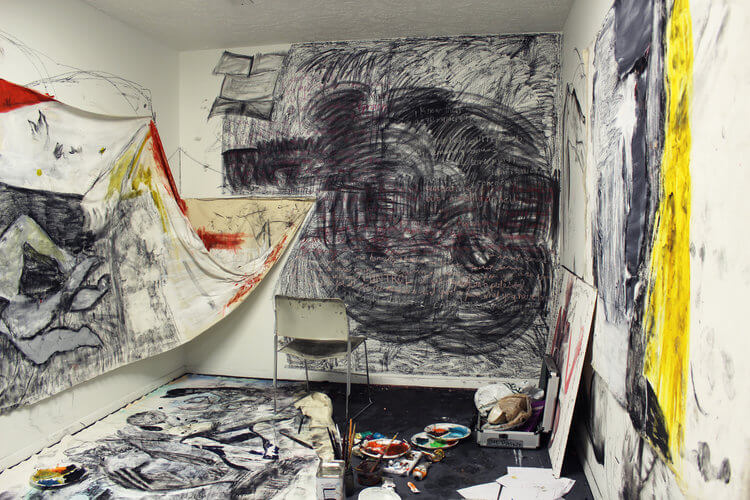 The series of paintings and assorted documents by Omaha-based artist Laura Carlson, currently on display at the downtown branch of the Omaha Public Library, is part art exhibit, part performance, and part social experiment.  The set of eight canvases in the Michael Phipps Gallery at the W. Dale Clark branch, entitled Social Studies, are the heart of this exhibit and will be on view until July 28.

Depending on when you visit, however, you will also have the opportunity to watch Carlson work and to participate in a series of workshops in which visitors will be invited to reflect upon the issues raised in the show as they impact their own lives.  Just what are these issues?  We are reminded of them in various ways.

Large pieces of poster paper list the hierarchies we generally know—racism, sexism, classism, etc.—while also providing a vocabulary for talking about how these hierarchies become tangled up with one another and what kinds of behavior they produce.  I encountered the terms “kyriarchy” and “tone policing” for the first time, although these coinages seem as if they had been hanging out there all the while.

As for the works on canvas, they are modest in their ambitions but involving in a way that comment on the aforementioned hierarchies by muddying them still further. The eight works fall into two categories.

The first are large works, not on stretchers, that are each in some way an assemblage of body parts rendered with a slightly different set of pictorial tools.  Whiffs of color along with footprints and other markers of human presence lurk around the edges of these works.

They are tacked to the wall and, in one case, to two perpendicular walls.  The work twists across the corner space as if it had been caught in the wind.  In conversation Carlson describes draping her studio with canvases, rendering all the walls of her space available for evolving efforts at expression.

The other category of works on canvas takes a different approach; each features a painted phrase that hovers at eye level.  Whereas the larger canvases are dreamlike and foreboding, the smaller canvases evince a sense of humor. “You’d think I’d know them better . . . my hands,” one reads in part.

This is wordplay in the vein of Barbara Kruger rather than Ed Ruscha, though Carlson has chosen to play the role of painter, with some help from graphite and cat paws.

In a YouTube video Carlson made recently in connection with her current position as a fellow of the Union for Contemporary Art, she describes herself as a “painter, installation artist, and performance artist.”  In the artist bio for this exhibition, however, she uses the more apt term “situation maker” to describe the role she wants to play.

At the same time, Carlson makes it clear that the situations she is interested in include the experiences that precede her paintings.  She evocatively describes her paintings as “remnants of an aggravated and very intuitive dance.”

These paintings are part of an exploration that is also evident in the choice of venue.  Working with curator Alex Priest, Carlson has chosen to “de-gallerize” the library’s   space in the southeast corner of the ground floor where the exhibit is installed.

In keeping with her own interest in the remnants of experiences, however, I couldn’t help but notice the strangeness of drifting from this exhibit out onto 14th Street, only to be met with the police car that so often sits at the foot of the library steps.  Some hierarchies will never go away.