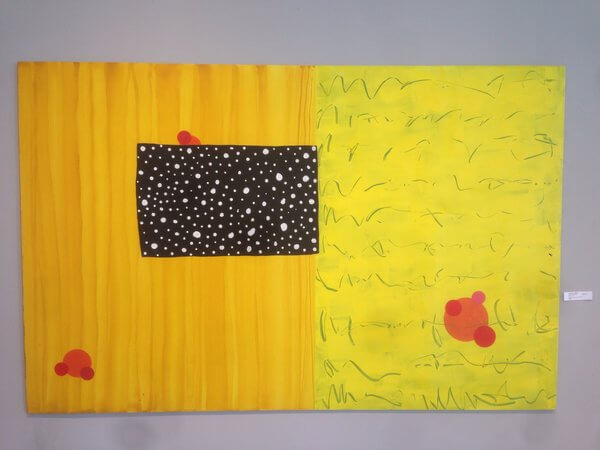 Not many artists have approached the challenges and contradictions of making art quite as astutely as Colin Smith.  There is experimentation with materials and process and he creates his art taking into account space and form.  Through a multilayered application of paint, pigments and resin Smith is able to create a consciousness within his pieces and a depth to his work that draws the viewer in and allows them to create their own narrative.

Larry Roots gallery owner of MAM where Smith is currently on view in the exhibit, Cool Abstraction 2, talks about the artist’s work and his own curatorial approach.

“After being in his studio I thought it was really important to actually go retrospective,” Roots said.  “This is work that he as shown some pieces of, but never in a very collective manner.  And he went back in critically to look at his work and realized that pieces needed to be reworked.  Smith went through each of the pieces to achieve a matte finish which created a super flat look.”

His latest show at MAM features not only paintings, but sculpture and fabric art that experiment with flattened surfaces occupied by shapes and forms that appeals to the viewer and allows them to see how space along with light, shadow and color reflects a sense of serenity without being too restrained.

Part of what is so impressive about Smith’s paintings is how he has thrown himself into his work.  His aesthetic includes: fine detail that can only be appreciated under careful scrutiny; a surface so smooth it looks as if it were a print instead of a painting; a visual weight despite its sense of extreme calmness.

“Contemplating the Royal Flush,” originally painted in 2003 but reimagined in 2014, shows the detail Smith is so capable of achieving.  The large oblong shapes painted in a golden yellow hue illustrate regimented forms of geometry with layering of vivid colors of green, blue and red.  Found at the bottom corner is a paint splatter encased in a blue box.  Smith’s overlapping colors provide balance to the piece along with a bit of flair to keep the piece from being too serious.

“Smith’s work now has depths of many, many layers of working with all of these modern finishes made by all kinds of methods,” Roots said. “But in the end, the details are amazing, but super flat.  This is both a technical and optical achievement.”

“Under Negotiation” is a much looser piece constructed by Smith.  Again, the use of bright colors is evident in his work.  The yellows and golds he uses add richness to the painting, but the black and white dotted rectangle box adds mystery to the piece.  The focus shifts to the highly stylized writing with red dots almost molecular like in nature adding interest to the piece.

George Haecker is another artist featured in this show.  His work is quite different from Smith’s, but complements it well.  Haecker works with collage which is often jocular and whimsical and tends to break the rules of logic but has a sense of controlled chaos.

In Haecker’s piece “Summer Storm” holds true to that vision.  The colorfully striped rainbow bands explode from a black shadowy presence asserting them through an underlying fragmentation.  The white background gives it an ethereal presence without weighing it down.  The viewer can sense the storm, but the tranquility that follows is evident within the piece.

There are many artists represented in this show all with their own definition of what cool abstraction can be.  Never a dull moment, the viewer will experience intense color and ocular semblance that demonstrate the artist’s poignant response on what abstraction means to them.

Roots describes this idea of cool abstractions as “nonobjective with geometric origins or minimalist tendencies all derived from the twentieth century in a retro way.   It is interesting to see the confluence of those who can create a harmonics with something that actually manifests itself into a show.  Imagery is fast, quick and gone and this show allows artists to create work to be manifested into a certain permanency allowing these artists to stop time in a way.”

Cool Abstractions 2 allows you to put your own interpretation into the pieces by using your own experiences.  And for that reason MAM is a remarkably stimulating setting for contemporary art, especially for the avant-garde.  One of the most charming things about art after all is the meaning that is created between the artist and the viewer.  And as Roots appropriately put it, “I think cool abstract is well…cool.”