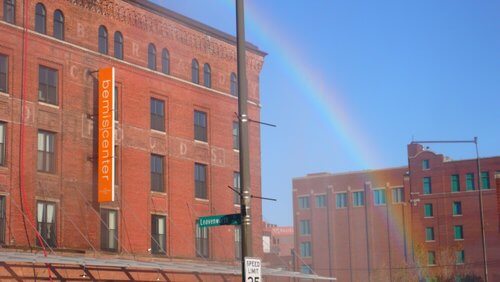 My heart leaps up when I behold a rainbow in the sky. – Wordsworth

This weekend, if everything goes as “planned,” a universally shared phenomenon will appear in all its colorful glory above the five-story Bemis Center for Contemporary Arts, twice a day for 20 minutes each, until Sept. 12, 2012.

Man-made, but no less poetic in their creation or appreciation, these rainbows will appear because of a complex collaboration of artistry, science, industry and the elements, aided and abetted by Bemis and its staff.

The Rainbow: Certain Principles of Light and Shapes between Forms is the site-specific, commissioned project of installation artist Michael Jones McKean, a former Bemis artist-in-residence in 2003. McKean is an internationally known artist who is currently an associate professor of sculpture and media at Virginia Commonwealth University. Recognized for his operatic, epic sculptural installations, including the intriguing and challenging The Zephyr Breeze in the Deepest Ocean Valley at Bemis in 2005, The Rainbow is his largest project to date.

McKean and Bemis Chief Curator Hesse McGraw began working on The Rainbow in 2008. Since then a series of successful tests and a highly innovative process forecast the project’s opening this weekend, which includes a public tour Friday from 6-7 p.m., a panel discussion, Saturday from 5-6 p.m. and a reception, 6-9 p.m. But the The Rainbow will climax, weather permitting, when pressurized gray water—captured, filtered and stored in six, 10,500 gallon water tanks—will jet from nine nozzles atop Bemis’ roof and recreate what virtually everyone knows to be: any display of the colors of the spectrum as it arcs through the sky, caused when the sun shines on droplets of moisture in the atmosphere.

But you don’t need a weatherman to know that this unique event, which will, hopefully, repeat daily for the next 15 weeks, will be yet another example of why the Bemis is such a leader in contributing to the area’s contemporary art vibe as part of its mission, this time in the public art arena.

“The Rainbow is exactly the type of project we have been searching for,” Bemis Director Mark Masuoka said, “because it is so aligned with our mission to support exceptional talent. Michael’s relationship with the Bemis Center was one of the key components.”

Both Masuoka and McGraw believe that highly experimental artwork of this sort will have long-term benefits, not only for Bemis but for the artist and the community as well.

“The Rainbow is a work of large ambition,” McGraw said, “both within the context of Michael’s career and within Bemis’ history as a presenting organization….Michael’s working at the forefront of his discipline and that’s where we want to be—in a position to support adventurous projects of international caliber and to advance the dialogue about contemporary art in our community.”

It has been a rewarding dialogue for Bemis for the past decade but a challenging one, Masuoka says, because “the issue is that most people have a preconceived idea of what (contemporary art) is or what it should represent. The Rainbow will challenge those preconceptions but also help redefine for many, not what art should be but what it can be.

It pushes some people beyond what they are willing to accept…or what the Bemis should be doing. The Rainbow’s conceptual basis…asks people to put aside their assumptions and rely on a purely emotional response. This is very difficult for most people to just say, ‘that’s amazing’ and not ask, ‘why?’”

Those patrons who have asked “Why?” after attending test runs and during the install the past year or so have been very “positive,” according to McKean and McGraw who strongly favor Bemis’ open door policy to an artist’s process.

“Bemis is interested in the way the venue can support artists who engage the public,” McGraw said. “I’ve been interested in the way artists push beyond the boundaries and the limits of the gallery spaces. It recognizes my role as a catalyst in making the work open and transparent. So is the artist open then in real time.”

One group that definitely “gets it,” Masuoka and McGraw said, is the long list of in-kind sponsors who supported about two thirds of what it required to get The Rainbow to this weekend’s lift-off.

“Our partners each have some personal point of ownership,” McGraw said, “ranging from atmospheric science, rainwater harvesting, an electrical challenge, adventurous plumbing to bigger picture questions such as, ‘What does it mean to live and participate in the formation of a progressive city?’”

A short list of these supporters includes lead sponsor Lindsay Corporation, Snyder Industries, Rybin Plumbing & Heating, Davis Erection and Crane Rental and Rigging, Mobile Roadie, Watertronics and Dr. Joseph Zehnder, chair of the department of atmospheric sciences at Creighton University. Typical of the hands-on support, skill and enthusiasm brought to The Rainbow is plumbing specialist Jay Rybin. Rybin dealt with possible code issues and an innovative piping design that connected equipment tanks, pumps and filters all the while living on site and working evenings to cope with the unexpected.

“Hurdles? Wow! From beginning to end,” he said. “Installing the 10” PVC down the north face of the building was a trick. The red brick is pretty soft and anchoring needed an upgrade. Then the surprise of the rainwater filters which were said to a ‘simple’ installation but came with instructions only in German.”

But there were highlights also Rybin said he will never forget about the process. “The afternoon the first downspout was connected to the tanks and it started to rain, and Michael had just arrived. We were capturing water…for those guys (McKean and McGraw), maybe eight years of dreaming, for me, weeks of tough work, just one of those moments that made everything worthwhile. A lot of high-fivin’ going on.”

But nothing, Rybin said, quite matched test day #1 when an expected 9 a.m. blast-off extended to 6:30 p.m. when all the “bugs” were finally worked out. “As the first nozzles blew high into the air, rainbows were floating above, in front, to the sides. All the work and it ‘frickin’ did work, right out of the gate. The people on the roof that evening made it very special.”

One individual who anticipates the inaugural of The Rainbow with similar insight is installation artist and sculptor Catherine Ferguson, whose site-specific work has also been shown at Bemis and whose public art is featured in the Omaha area.

“The physical qualities of a site are all taken into consideration during the design process of the installation,” Ferguson said. “The reward for an audience is a new experience and a new perspective on the site. The memory of the installation will be connected to that place long after the work has been dismantled.”

Yet Ferguson admits that when she first sees this rainbow she won’t be thinking about the long and arduous process. “It would be quite exciting to have nature as your collaborator. The artist sets up the water conditions but still the sun has to appear. The unpredictability of natural forces makes McKean’s project aesthetically risky and therefore more interesting. Garden designers have been collaborating with nature for centuries. To produce a huge rainbow on top of a five story building is much more ambitious, but perhaps it comes from the same impulse.”

Whatever drives McKean, McGraw says it results in work of “uncanny scale” including among other facets,  “condensed moments of universal phenomena…that stretch to encompass the fullness of meaning and human sentiment.” A recent conversation with artist and curator explains the former’s connection to a rainbow at both the creative and human level.

“I’m not interested in a rainbow’s significance,” McKean said, “in as much as it’s been branded and codified. Before all that it was simply sublime, a thing larger than ourselves. Why do we go to the Grand Canyon? To try to commune with something simultaneously epic and yet near. The rainbow fits that trajectory.”

McGraw also points to a certain dichotomy in McKean’s work/impulse that includes The Rainbow experience. “When you feel the sublime, you also feel terror, diminished, the span of your life compared to the universe. It’s unknowable and yet unforgettable.”

And infectious for all involved. “When an artist is inspired and given the tools, materials and resources they need, beautiful things tend to happen,” Rybin said. “That energy is contagious.”

Rainbows then, however made, are significant on their own terms, no matter how temporary, Ferguson says. “They have the potential to remind us that visual art can be as ephemeral as music. Seeing one is your legendary ‘pot of gold.’ This will be different from other rainbows, so I can’t predict what I will feel, but I have never seen a rainbow that didn’t thrill me.”

The Rainbow: Certain Principles of Light and Shapes between Forms continues through Sept. 15, 2012 at the Bemis Center for Contemorary Arts, 724 South 12th St. For details go to bemiscenter.org